Ireland’s Prime Minister Micheal Martin has claimed the UK government does not “fully get” the Good Friday Agreement following Britain’s decision to override parts of the Northern Ireland Protocol.

Speaking in the Dail, the taoiseach described the UK government’s plans as “economically incoherent” and warned that changing parts of the post-Brexit deal the country secured with the EU could “destabilise” politics in Northern Ireland.

Mr Martin also described the bill, which was published on Monday, as a “profoundly dispiriting moment” and “reckless”.

Politics Hub: Truss challenges critics of Rwanda deportations to come up with alternative

“But also the wider interest from the European Union and from the United States, and parallel with that we’re now witnessing a denial of democracy, where people have voted in Northern Ireland for the convening of an Assembly and the formation of an Executive. It’s not acceptable that the Assembly has not been convened.

Sinn Fein leader Mary Lou McDonald said the move by the UK government was “disgraceful and utterly reckless” and accused Prime Minister Boris Johnson of using the issue to cling to power.

“Mr Johnson’s belligerent approach to Ireland is part of a cynical attempt to cling to power in Britain at any cost,” Ms McDonald said.

“It jeopardises so much achieved by so many over such a long period of time.

“It fundamentally undermines the Brexit protections for Ireland that were so hard won, and it risks serious economic and political damage.

“This latest move is part of a wider wrecking agenda that seeks to undermine the Good Friday Agreement and to rob our people of a better future.”

It comes as Brussels threatened legal action after the UK government published legislation which will override the protocol – the post-Brexit deal that governs Northern Ireland’s trading arrangements.

The protocol is designed to prevent the return of a hard border with the Republic of Ireland but effectively creates a border in the Irish Sea and means exports from Britain are subject to customs checks.

The UK says that creates problems for businesses and is a threat to the power-sharing arrangements set up after the Good Friday peace agreement in 1998 – with the DUP refusing to support a new Northern Ireland government until the issues are resolved.

Foreign Secretary Liz Truss told Sky News that the “unintended consequences” of the protocol – a deal that was signed by Britain – meant it had to act, with the situation “gradually getting worse”.

“That’s why the government’s determined to act and we’re doing so in a reasonable way,” she said.

But Labour accused the government of pressing “the nuclear button” over the protocol.

The bill will enable ministers to establish a “green lane” so trusted traders are allowed to move goods from Great Britain to Northern Ireland without checks, as long as the products remain within the UK. 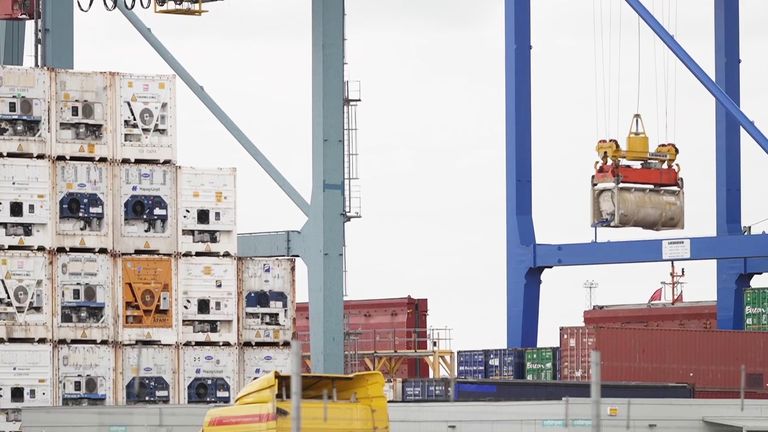 
The EU is threatening legal action tonight, after the Government unveiled plans to rewrite the Northern Ireland Protocol.

Goods supplied by firms outside the trusted trader scheme, or products destined for Ireland and the EU, would go through a red lane and face checks.

In a legal policy paper published alongside the bill, the government states the move is justified under international law because of the “genuinely exceptional situation”.

The European Commission’s Vice President Maros Sefcovic said the EU viewed the UK’s actions with “significant concern” and that it would consider what steps to take next.

He said this would begin with the resumption of legal proceedings against the UK, which it suspended in September, over breaching the withdrawal treaty of 2020.

As well as restarting infringement proceedings against the UK, he said the EU would also look at launching further legal action to protect the integrity of the EU single market, as he ruled out renegotiating the trade protocol.