It was meant to be a much-needed marriage counselling session between Boris Johnson and northern MPs, several of whom indicated they had no confidence in him less than a fortnight before.

But it was not to be.

Perhaps it was never to be.

There was always something curious about the prime minister’s decision to accept the invitation to the Northern Research Group Conference, which represents the caucus of MPs keen on Mr Johnson maintaining his focus on the red wall rather than on the competing demands of southern Tories.

It was odd that he should signal sympathy for one faction at this point in the electoral cycle.

Odd that he should want to come face to face with an audience containing so many critics – the former Tory mayoral candidate for Liverpool City happily telling Sky News he should quit.

And odd that it should come just at a point where concern about his stewardship of the campaign to retain traditional Tory heartlands is reaching unprecedented concern with the Tiverton by-election next week.

Sky News understands the PM is being advised to ditch his public focus on the red wall by cabinet colleagues.

Nevertheless, Mr Johnson did accept the invitation, probably because it came from head of the Northern Research Group Jake Berry, one of his few actual long-standing friends in parliament.

But in the final furlong, he didn’t turn out, even despite promises from Downing Street to conference organisers this morning that he was “on the train” to Doncaster.

Security concerns always remain paramount, but still MPs here are cross about what’s happening, and of what they see as needless dissembling. 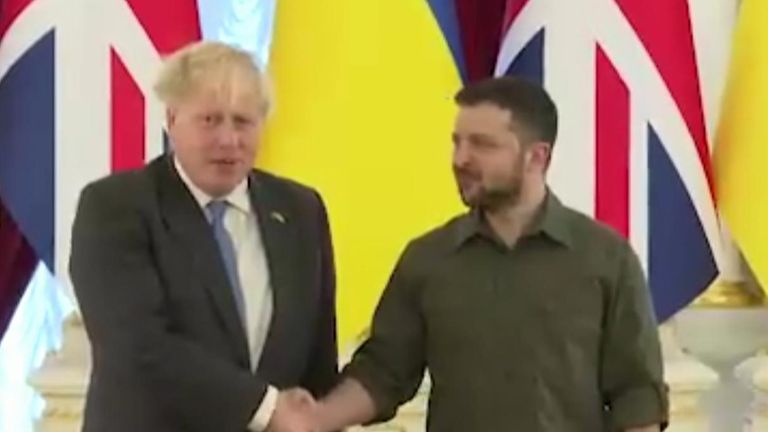 Days of planning must have gone into today’s trip to Kyiv by the PM, all while actively pretending he would come.

One Tory MP at the Northern Research Group conference was utterly furious.

“This is the first test of outreach to his colleagues and he’s failed it,” they said.

Another said that Mr Johnson had “burned through” the goodwill of 40 MPs.

In public, the organiser Mr Berry said he was “disappointed” and the PM should listen to the demands and ideas aired today.

In the vacuum, Chancellor Rishi Sunak made a well-regarded appearance at the dinner the night before, and Tom Tugendhat confirmed his ambitions to succeed Boris Johnson.

There is utter cynicism in private amongst some Tory MPs that Mr Johnson chose a “photo-opportunity” with President Zelenskyy over a possibly difficult confrontation with colleagues – something Number 10 and other Tory MPs would furiously rebut, criticising this view for belittling the crisis and no Tory here would dare say publicly.

Nevertheless, today has not helped Mr Johnson with some colleagues, at a time when he can ill afford to anger the party and other bits of Downing Street are working hard to repair relations.

BBC chairman Richard Sharp has asked for a review into his appointment after claims he helped Boris Johnson secure a loan. Mr Sharp said he…

At the height of the partygate saga, a joke went round Westminster that every time the sense of crisis began to escalate, Boris Johnson would…

Nadhim Zahawi settled his tax issue with HMRC while he was serving as chancellor, a government source has told Sky News. Questions about the now…

Ambulance workers are staging a fresh strike in the escalating dispute over pay and staffing. It comes after the chancellor was told he can halt industrial…

By Osmar Olivo, InfoWorld | About | Emerging tech dissected by technologists Internet users want control over their data and visibility into how their data…

The idea of cloud repatriation is sensitive and often misunderstood. Let’s do some back-of-the-napkin calculations to see where it might make sense. wutzkohphoto / Shutterstock…

Find out how source code is compiled for different programming languages and computer architectures, including the evolution from FORTRAN to CLR and JIT compilers. mpix…