In this unpredictable leadership race, there have been two certainties from the start: Rishi Sunak is the frontrunner amongst MPs but significantly less popular with party members.

YouGov polling published today revealed that the former chancellor loses against Liz Truss and Penny Mordaunt in the final run-off, as things stand.

Those two factors matter as Mr Sunak heads into the frenetic final 24 hours of campaigning, with the votes tight between Ms Mordaunt and Ms Truss for second place.

Ms Mordaunt is still ahead of Ms Truss in terms of votes from MPs, but only just – the foreign secretary put on 15 votes in round four to get within six votes of her rival.

The pair will now be frantically battling to win support from the 58 backers of now-eliminated Kemi Badenoch, although Penny Mordaunt will face an uphill struggle on that front, sitting on the opposite wing of the party to Ms Badenoch who publicly challenged her position on trans issues throughout this race.

But at this stage of the contest, it is never a straight fight. MPs take decisions based as much on who they don’t want to proceed as who they do.

As the fourth round ballot landed on Tuesday afternoon, Westminster was awash with speculation over how Ms Truss had managed to pick up 15 votes, given the candidate eliminated in the previous round was Tom Tugendhat – the man seen as her most natural opponent in the final five. Could Mr Sunak have lent votes to Ms Truss in order to give her momentum, only to switch that support to Ms Morduant for the final round?

There are a couple of reasons why such skullduggery could be at play: Camp Sunak fears a run-off with Ms Truss more than against Ms Mordaunt.

Ms Truss, a cabinet heavyweight, has positioned herself as the tax-cutting Tory and the real “true blue” in the mould of Thatcher – taking pot shots at Mr Sunak for putting taxes up to the highest level in 70 years.

In this battle of ideas, the former chancellor will worry that Ms Truss will edge past him. Or, as Sunak backer Chris Skidmore put it to me, “I think Rishi versus Liz is going to be the most feared contest – that will be a battle for ideas.”

This is a consideration for Ms Sunak because he has consistently trailed both Ms Truss and Ms Mordaunt amongst party members. Polling published today once again confirmed the trend, but what his team will be looking at is the relative performance of his competitors. 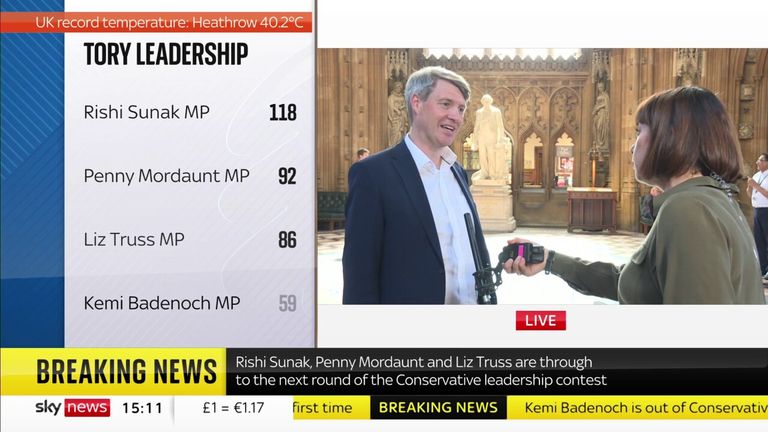 Ms Mordaunt, leading with party members but a week ago, would have now lost to both Ms Truss and Ms Badenoch in Tuesday’s poll. That suggests the more the members see of Ms Mordaunt, the less they like her. Mr Sunak will hope to capitalise on that in the hustings ahead.

In a straight fight between the two women battling for second place, Ms Truss has the edge. The remaining Badenoch backers are more likely to break for her or Rishi Sunak than Ms Mordaunt.

But as we go into the final ballot, this is anything but a clean or clear race. There are rumours flying around too of dossiers and dirty tricks that could be used to torpedo one of the campaigns as the gossip in the MPs’ tearoom goes into overdrive.

But as we go into the final ballot, this is anything but a clean or clear race. What we do know for sure is that the man winning with MPs is – according to polling – losing with party members, so all three have everything still to play for and everything to lose.