Rishi Sunak is promising a “radical” change if he becomes prime minister by cutting the basic rate of income tax from 20p in the pound to 16p by the end of the next parliament.

In his latest pitch to Conservative Party members, the former chancellor claims the 20% reduction would be “the largest cut in income tax for 30 years”.

Mr Sunak says it will be funded by “additional tax receipts generated by forecast economic growth”, promising to not increase government debt to cover the cost.

And he also pledges to “drive greater efficiency and reform” in government to deliver better value for money.

Politics Hub: Truss wins significant backers, but Sunak insists it is all to play for

Speaking as party members begin to receive their ballots for the final leadership vote, Mr Sunak said his plan was “radical” but “realistic”, and it stuck to his “core principles” on the economy.

“Firstly I will never get taxes down in a way that just puts inflation up,” he said. “Secondly I will never make promises I can’t pay for. And thirdly I will always be honest about the challenges we face.

“Because winning this leadership contest without levelling with people about what lies ahead would not only be dishonest – it would be an act of self-sabotage that condemns our party to defeat at the next general election and consigns us to a long period in opposition.”

In an apparent swipe at his rival, Liz Truss, the ex-chancellor added: “There is no more serious choice than the one now facing Conservative members: to decide the person who leads our country at home and abroad during difficult times.

“As they turn to that decision I would urge them to treat with caution any vision that doesn’t involve any difficult trade-offs and remember that if something sounds good to be true – then it probably is.” 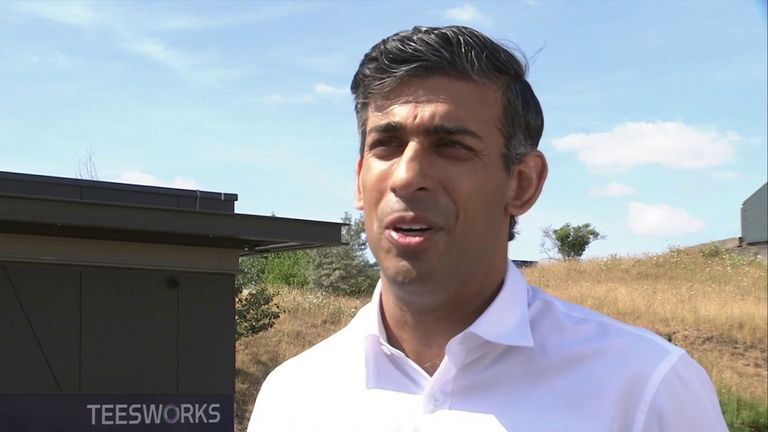 Tax has been the main dividing line in the competition between Mr Sunak and Ms Truss to become PM.

She has outlined £30bn of tax cuts if she was to take office, including scrapping the proposed rise in corporation tax and reversing the government’s National Insurance hike.

Mr Sunak and a range of economists have claimed such action would see the current record high inflation in the UK go up even further.

But Ms Truss claims her plan would “increase tax revenues by growing the economy”, accusing the former chancellor of policies that “choke off growth by raising taxes” to a 70-year high.

A source from her campaign team accused Mr Sunak of performing “another U-turn on cutting tax”, after announcing he would cut VAT on energy bills, but said while it was “welcome” it was “a shame he didn’t do this as chancellor when he repeatedly raised taxes”.

They added: “Unfortunately it’s a case of ‘jam tomorrow’. People need tax cuts in seven weeks not in seven years. He has also made it conditional on getting growth first – knowing full well that his corporation tax rises are contractionary.

“The public and Conservative Party members can see through these flip flops and U-turns.”

Her approach has proved popular with the membership, with her leading the polls, as well as gaining the support of significant party figures over the weekend – Defence Secretary Ben Wallace and former leadership hopeful Tom Tugendhat.

But Team Sunak insists it is still “all to play for” and the race “has only just begun”, pointing to a Savanta ComRes poll of local Tory councillors showing only a 2% gap between the final two.

In her latest policy pitch, Ms Truss will pledge to “unleash British farming to enhance our food security”.

In a visit to the South West of England today, she will promise to remove “onerous EU regulations and red tape” to help “supercharge productivity”.

And she will commit to a short-term extension of the government’s seasonal workers scheme to get the staff farmers and growers need, as well as working with the industry to address longer-term skills shortages.

“The pandemic and cost of living crisis have shown it is more vital than ever for us to ensure we have a high quality and affordable supply of British food,” Ms Truss said.

“As a former Department of Environment, Food and Rural Affairs secretary of state, I understand the challenges faced by farmers and they can trust me to deliver the changes they need.”

Conservative members will begin to receive their polling papers today and will be the only people to have a say over whether Mr Sunak or Ms Truss enters Number 10 as the UK’s next prime minister.

They will have until 2 September to cast their vote and the winner will be announced on 5 September.

The new prime minister is then expected to replace Boris Johnson the following day.