Rishi Sunak has emerged as the frontrunner in the selection process by Tory MPs to succeed Boris Johnson.

His resignation as chancellor less than two weeks ago prompted the collapse of the government as a raft of senior people followed him out the door in protest over the prime minister’s leadership.

Some MPs have criticised his perceived disloyalty, with Mr Johnson reported to have made clear to colleagues he wants “anyone but Rishi” to take over the top job.

But as Sunak supporter Richard Holden put it, there are some in the party who want to reward him for doing the “honourable thing” and “stabbing” Boris Johnson “in the front”.

Mr Sunak, 42, was elected as Conservative MP for Richmond in Yorkshire in 2015.

But he rose to prominence when he was made chancellor in February 2020 – a month before the COVID pandemic took hold.

He won praise for rapidly introducing support schemes worth billions of pounds to keep jobs and businesses afloat during 18 months of lockdowns.

But before quitting as chancellor, he had warned of “tough choices ahead” to tackle record levels of national debt incurred during the pandemic, despite the unprecedented cost of living crisis.

Lowering tax ‘question of when not if’

In sharp contrast to other candidates in the leadership election, Mr Sunak is sticking to his guns in resisting immediate tax cuts, arguing it would fuel rising prices and warning against telling voters “comforting fairy tales”.

In his “Ready for Rishi” campaign speech he said he would lower the tax burden, it is just a question of “when not if”.

On social issues, Mr Sunak told the Mail On Sunday he would reverse “recent trends to erase women via the use of clumsy, gender-neutral language” and said that “we must be able to call a mother a mother and talk about breastfeeding”.

In terms of governance, he has promised a “better, smaller, 21st century government”.

Up until the start of this year, Mr Sunak was seen by many Tory MPs as the frontrunner to succeed Mr Johnson.

But after introducing a number of policies – such as a national insurance rise – which went down badly with Tory MPs, his popularity took a knock.

He was also fined for attending the prime minister’s birthday party during lockdown, compromising his ability to separate himself from partygate.

The revelation that his wife, the multimillionaire Akshata Murty, held non-dom status and therefore did not have to pay UK tax on her sizeable international income also damaged his standing.

After the uproar that a minister’s wife was not paying UK taxes on her non-UK income, she confirmed she would do so as it had “become clear that many do not feel it is compatible with my husband’s role as chancellor”.

Mr Sunak has increasingly faced questions about whether his own vast personal wealth makes him an unsuitable candidate to take over from Mr Johnson and tackle the cost of living crisis.

He is one of the richest MPs in the Commons and his wife is the daughter of an Indian billionaire.

Despite this, Mr Sunak has continued to come out on top in ballots of Tory MPs voting in the party leadership race.

Prominent backers of Mr Sunak include Steve Barclay, the former No 10 chief of staff who was made health secretary after Sajid Javid resigned, Justice Secretary Dominic Raab and Transport Secretary Grant Shapps. 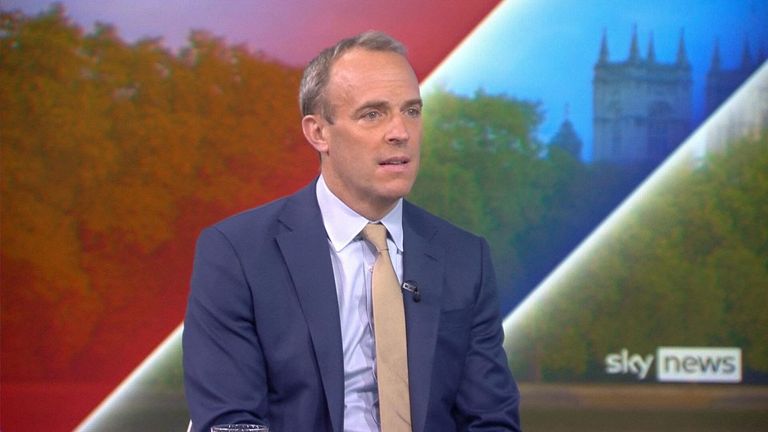 
‘Only Rishi could win an election’

But although he is a favourite among Tory MPs, polling shows he is not as big of a hit with Conservative party members, who will have the final say in who becomes leader.

A recent YouGov members poll showed he would lose the contest in a run-off against both the remaining candidates – Liz Truss and Penny Mordaunt.

According to our political editor Beth Rigby, Camp Sunak fears a run-off with Ms Truss the most.

Ms Truss, a cabinet heavyweight, has positioned herself as the tax-cutting Tory and the real “true blue” in the mould of Margaret Thatcher.

She has taken shots at Mr Sunak for putting taxes up to the highest level in 70 years, while he has accused her of peddling “something-for-nothing” economics that even Jeremy Corbyn would baulk at.

He also accused her of being a socialist – certainly not a compliment among Tory MPs.

Read More:
Who is Liz Truss? The new ‘Iron Lady’ vying to be PM
Who is Penny Mordaunt? The navy reservist with eyes on Number 10

‘Maharajah of the Yorkshire Dales’

Mr Sunak’s grandparents were born in the northern Indian state of Punjab and emigrated to Britain via East Africa in the 1960s.

His father was a GP and his mother was a pharmacist.

Born in Southampton as the eldest of three siblings, Mr Sunak was sent to England’s oldest public school, Winchester College, where he became the first Indian-origin head boy.

His experience at the historic boarding school was “intellectually transforming” and put him “on a different trajectory”, Mr Sunak has previously said.

He went on to study philosophy, politics and economics at Lincoln College at the University of Oxford, where he obtained a first-class degree.

After completing an MBA from Stanford University, where he met his future wife, Mr Sunak went on to work for investment bank Goldman Sachs as an analyst.

He is said to have already had job offers from investment banks under his belt while still in his second year at Oxford.

Mr Sunak moved to work for hedge funds in 2006 when he joined TCI, known as a very aggressive fund.

Mr Sunak was selected as the Conservative Party candidate in the Yorkshire seat of Richmond ahead of the 2015 general election.

He was duly elected and replaced the former Tory leader William Hague as the constituency’s MP.

Mr Sunak, who has been nicknamed the “maharajah of the Yorkshire Dales”, has previously recalled being introduced as “the new William Hague”, to which a Yorkshire farmer replied: “Ah yes Haguey!

“Good bloke. I like him. Bit pale, though. This one’s got a nice tan.”

Mr Sunak supported Brexit at the 2016 EU referendum and claimed the UK would be “freer, fairer and more prosperous” outside the EU.

After his past two election victories Mr Sunak, a Hindu, has taken his oath in the Commons on the Bhagavad Gita.

He was first appointed to government by Theresa May in January 2018 as a junior minister at the Ministry for Housing, Communities and Local Government.

He had been an early backer of Mr Johnson’s campaign to replace Mrs May as Tory leader.