Argentina record their biggest-ever win over Australia, beating the Wallabies 48-17; watch Australia host South Africa (6.30am) and then New Zealand take on Argentina (8.45am) on August 27 in the next round of matches, live on Sky Sports 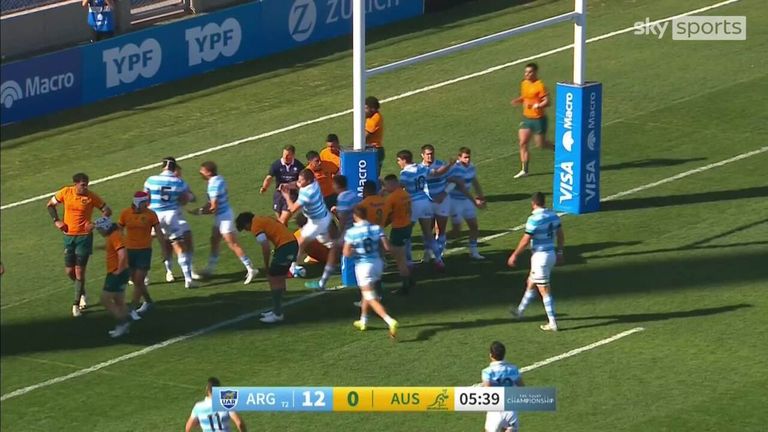 Highlights of the Rugby Championship clash between Argentina and Australia.

Highlights of the Rugby Championship clash between Argentina and Australia.

Thomas Gallo scored two tries as Argentina produced a sparkling attacking display to smash a depleted Australia side 48-17 in their Rugby Championship clash in San Juan on Saturday.

Argentina scored twice in the first six minutes and feasted off the Wallabies’ lack of experience to run in seven tries in their biggest ever victory over Australia and their largest in the southern hemisphere competition.

The Wallabies scored tries through captain James Slipper and centre Len Ikitau but, bar a brief spell in the opening half, they never really threatened the hosts, with the absence of several leading players due to injury and personal reasons taking its toll.

Only five of Australia’s starting 15 had more than 30 caps and they never got to grips with Argentina’s intensity.

Australia had beaten The Pumas 41-26 last weekend in Mendoza, but the home side were a different beast on this occasions, applying pressure throughout with ball in hand and through attacking kicks.

“We really wanted to back (last weeks win) up but we fell short of standards today,” Slipper said.

“I thought the Argentinians were pretty good, they got the momentum behind them in the crowd and they’re a tough team to play catch up footy against.

“Its been a really tough tour for us. We’ve got the South Africans twice at home now, were looking forward to that, getting back home in front of our fans.”

Argentina scored in the opening minute as Imhoff chased his own kick and when the ball was fumbled by Australia fullback Tom Wright, was able to race clear.

One try quickly became two as the home side powered over the line from close range, prop Gallo providing the finish touch.

The fast start continued as Australia finally got possession and after a barn-storming run from number eight Rob Valetini, Slipper crossed to score.

De la Fuente and Gonzalez punished Australian errors for two more tries in a helter-skelter first half that ended with the home team leading 26-10.

When Gallo scored his second try with 16 minutes remaining, any hopes of an Australian comeback were dashed, even after Ikitau crossed for his second try in as many weeks.

Further scores by Boffelli and Albornoz cemented Argentina’s superiority in what will be a sweet win for former Australia coach Michael Cheika.

The Wallabies host South Africa (6.30am) and then New Zealand take on Argentina (8.45am) in Round 3 of matches on Saturday, August 27, live on Sky Sports.