The Alcester trainer landed the milestone victory just over eight years since his first winner, having won six Grade One races in that time.

The horse defeated Torn And Frayed in a stirring finish, with sibling Harry Skelton getting the better of Sam Twiston-Davies despite being two lengths down at the final fence.

Skelton said after the race: “It’s magic. I remember when I worked for Paul and he had his 1,000th winner, it was a bumper I think, at Folkestone. I texted him ‘well done boss’ and he said ‘don’t worry about this thousand, worry about the next thousand’ and I’m thinking the same thing.

“We’ve had some good successes here, our first big success was here with Willow’s Saviour and that’s a day we’ll all never forget.

“A thousand is a big number, (but) I was more determined and aggressive, and desperate if you like, to get 200 in that season three years ago.”

Harry Skelton, who is stable jockey at the Alcester yard and had his own 1,000th winner last month, paid tribute to his sibling’s dedication and leadership, as well as his forward-planning.

“Dan’s a great leader and he’s got a good team behind him,” he said “We all work together, but ultimately he’s the one who trains them and this is a great testament to him.

“You have to have the dedication and drive and that’s what he’s got. “He’s done so well with so many (horses) that it’s hard to just put your finger on one. It’s obvious for everyone to see that he can pick a race from a long way out, plan it and pull it off.”

Elsewhere on the card, exciting novice Go Dante had his colours lowered by Tweed Skirt for Nico De Boinville and Nicky Henderson in the Ascot Fan Pass ‘Introductory’ Hurdle.

The Olly Murphy-trained five-year-old always looked under pressure on the quick ground, and was unable to reel in the frontrunner, eventually being beaten by just over two lengths.

The De Boinville and Henderson combo had a winner later on the card with Captain Morgs, who took full advantage of a sloppy jump at the last by Garry Clermont for Jonjo O’Neill to take the Garden For All Seasons Handicap Hurdle. 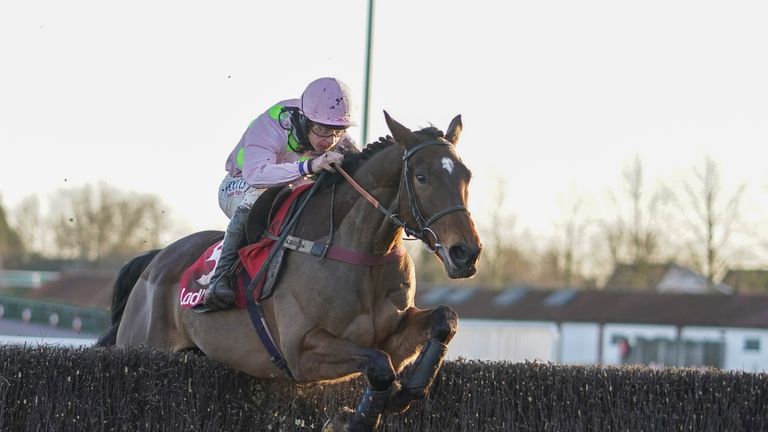 Venetia Williams and Charlie Deutsch enjoyed a successful southern raid, landing a double on the day, including the feature Events At Ascot Handicap Chase with Pink Legend, who was a three-length winner from Guy and Smarty Wild.

They also took the Not Forgotten Handicap Chase with eight-year-old mare Kapga De Lily, who took her run to six victories in her last eight starts

Williams confirmed after the first success that Royale Pagaille will take his chance in Saturday’s Betfair Chase at Haydock.