Jonny Bairstow admitted he has had to “dig deep” during a difficult couple of years in Test cricket after scoring a superb century as England showed fight in the fourth Ashes Test.

The tourists quickly slipped to 36-4 on day three in Sydney but Bairstow put on 128 with Ben Stokes and later shared a stand of 72 with Mark Wood before bringing up his seventh Test hundred in the last over of the day as England closed on 258-7, still trailing by 158 runs.

Having found himself in and out of the team over the past few years as well as being shunted up and down the batting order, Bairstow showed he still has what it takes to succeed in Test cricket after putting in the hard work to reach this stage.

“Unbelievable [feeling to reach a century], absolutely unbelievable,” he told BT Sport. “I was ecstatic, extremely proud and there is a lot of hard work gone into that one.

“It’s been tough, you’ve got to dig deep. I’m sure you guys and everyone else will have mentioned the scheduling and how much red-ball cricket people are playing leading into massive series like this – and it’s not just this series, it’s the India series and the India series before that when we were over there.”

After years of tweaking with his technique, Bairstow explained that ahead of his innings at the Sydney Cricket Ground, he had tried to revert back to his old approach in certain areas in order to feel more natural at the crease.

“You’ve got to delve very, very deep into stuff that you’ve worked hard on for a number of years,” he said.

“Your technique changes over those years and you’ve got to pick parts of it and sometimes go back to the bits you looked at a couple of years ago – and that’s exactly what I did this morning with James Foster. We just went in the indoor school and had a bit of fun this morning, just went back to something from years ago.

“I tried not to be too rigid. You can look at technique a lot and some things work but other times you’ve also got to be natural about the way that you’re moving otherwise you become a bit clunky and a bit too rigid. 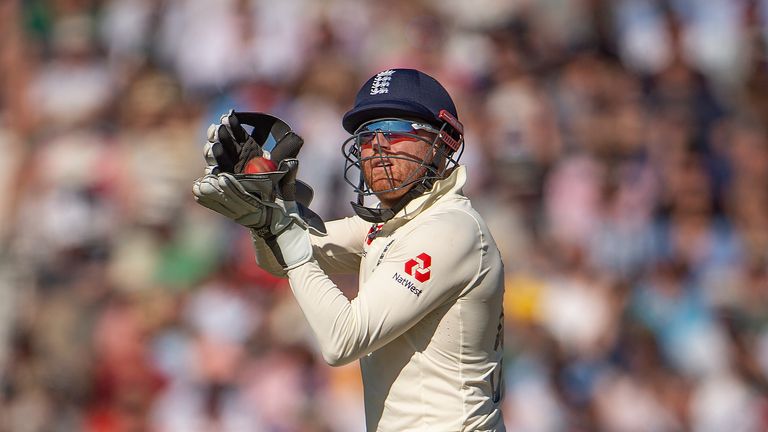 “I’m sure they will be thinking about giving him back the gloves. His keeping has certainly got better over the years and I think he feels more like an all-rounder when he has them.”

“That’s where I felt I’d got to, I was trying to be something that, potentially, I’m not. One of my strengths is putting the pressure back on bowlers and running between the wickets, trying to get them off their lengths and give me a different ball.

“But that also comes with spending time out in the middle consistently.”

“It was probably his best Test knock in terms of skill, application and bravery,” Cook told BT Sport.

“He’s such a likeable lad and he’s had a tough time in Test cricket over the last couple of years. In and out of the side, losing the gloves, batting at No 3, No 5, No 7.”

Cook also argued Bairstow has the attributes that mean England should be looking to build around him when they begin their inevitable red-ball rebuild at the end of this Ashes series.

“This will do Jonny the world of good as he will have doubted himself over this period of time,” Cook added. “I hope it has proved to him that he can play Test cricket again and stoked the fire and started the rebuild of English cricket in terms of the fight and spirit needed.

“He is the sort of player you want to build a team around in terms of determination, courage and fight, which has been lacking in this series.

“The way he played Lyon, sweeping, paddle sweeping, hitting him for a couple of big sixes. That intent allied with clarity of thought and sticking to a game-plan knocked the stuffing out of Australia. It was a truly spectacular Test hundred.”

Meanwhile, Moeen Ali, also speaking on BT Sport, says Bairstow is a better batter when he plays on instinct and thinks he is suited to coming in in the lower middle-order for England in the longest format.

“He is a brilliant player, in my opinion,” he said. “Bairstow doesn’t panic. He can be brutal but has a lot of finesse about his game as well.

“He took his time getting in but then scored quickly, going through the gears and almost went one-day mode by standing leg-side and playing a few shots before going back into his shell later on and played normally again. That’s what top batters do and he certainly has the ability to be one of the best players in our team.

“I think he has gone back to his old technique, being a bit lower with the backlift and played on instinct. He is better when he does that. He made Lyon look pretty average. He played with Lyon, who didn’t look like getting him out at all.

“I think No 6 or 7 is a really good number for him. He can be dangerous if we have played really well at the top and also has the technique if we are struggling.”

‘Sore’ thumb not enough to force Bairstow off

A painful blow to the thumb off the bowling of Pat Cummins threatened to end Bairstow’s innings on 60 and while the Yorkshireman admitted it is still sore, he had no intention of leaving the field and was rewarded with his memorable century moment late in the day.

“Slightly sore. It’s starting to get a bit more now that we’ve come off the field,” he said of this right thumb.

“I was hurting but you’re playing in a New Year’s Test match in Sydney, on the Pink Day, it’s going to take a heck of a lot to get you off the field, let’s put it that way. In some ways it frees you up, in some ways it doesn’t but at the end of the day, you’ve still got a job to do.

“Yes, it is sore and it will be sore but you’re playing cricket for England and I’m very, very proud to do that.

“We have two days to scrap and scrap hard. That’s how we look at it.