Rafael Benitez insists he is not worried for his future at Everton despite a banner in the away end calling for his exit during the Toffees’ 3-2 FA Cup third-round win at Hull on Saturday.

Everton’s victory was just their second in 13 matches, a run of form that has seen pressure rise on former Liverpool boss Benitez.

And the rare win was not enough to spare the Spaniard from the fans’ ire, with the banner reading ‘Benitez get out of our club’ visible during the game.

But when asked if he was worried, Benitez said: “No. What I said before – the problems that you try to fix are coming from a time ago.

“It’s not that in the last three months we have different issues, so the issues are similar and you try to fix that.

“I have experience to do it. I will try to do my best. If some fans understand that, they will support the team. That is the main thing, to stay behind the team.

“If they don’t understand that some of them, it’s fine, it’s up to them. But I will continue trying to do my best, be professional and be sure that we can improve what depends on us.”

Everton’s victory over their Championship opponents came after extra-time, and Benitez was pleased with his players’ reaction to setbacks.

The Championship hosts made life tough for Everton on Saturday evening, opening the scoring inside 45 seconds through Tyler Smith before Demarai Gray and Andre Gomes turned things around.

But substitute Ryan Longman took the match into an additional 30 minutes before returning Andros Townsend secured a hard-fought third-round win when taking aim from 30 yards.

“I think obviously we started with a big mistake but after, the reaction was very positive,” Benitez said.

“I was really pleased in the way that we were creating chances, chance after chance, so in football you have to take your chances.

“In the FA Cup it’s even more important to do it because if not, the other team grows in confidence and belief.

“At the end, so we have a great goal from Andros Townsend but we put ourselves in a difficult position for a while.”

Hull boss Grant McCann was proud of his side’s efforts across 120 minutes against Premier League opposition. 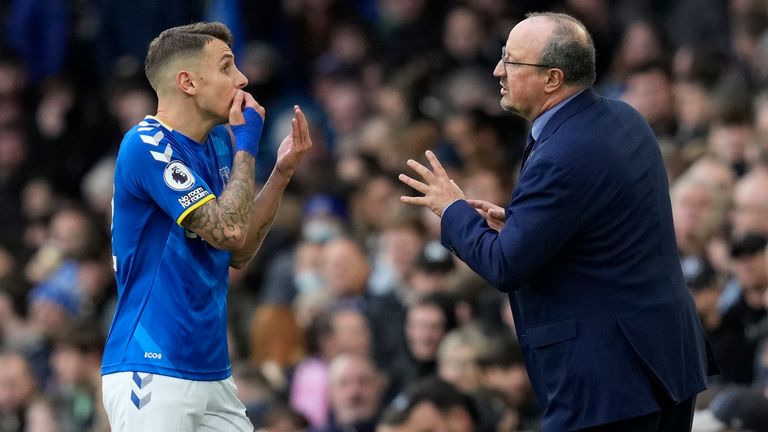 “I’m disappointed to lose the game but in terms of the performance I was really pleased,” said the Tigers boss, who was coy when asked about Acun Ilicali’s prospective takeover.

“I thought, ‘we’ve gone properly toe to toe with a Premier League team today’. We pushed right until the end.

“I thought we had an equaliser at the end with Tom Eaves’ shot but it was a tremendous save from (Asmir) Begovic.

“All in all I’m pleased with the lads, proud of their performance and I said that to them in the changing room.

“I said ‘you’ve got to be proud of yourself today because you’ve every bit matched Everton today’ but unfortunately we’ve come out on the wrong side of the result.”

Follow every Everton game in the Premier League this season with our live blogs on the Sky Sports website and app, and watch match highlights for free shortly after full-time.

Get all this and more – including notifications sent straight to your phone – by downloading the Sky Sports Scores app and setting Everton as your favourite team.