Three seasons after stepping up from part-time rugby to Super League with Wigan, prop Joe Bullock has decided to make the switch to the Wolves to continue his development. “There are some good players at Warrington I can look at and learn off,” he said

When it was announced in September that Chris Hill would be leaving Warrington Wolves to join Huddersfield Giants, there were plenty of people left wondering how incoming head coach Daryl Powell would fill the void left by the England international.

The departure of the man who had been a cornerstone of the Wolves pack for a decade means there are some big shoes to fill, but Powell still has England duo Mike Cooper and Joe Philbin, plus Robbie Mulhern and the up-and-coming pair of Rob Butler and Warrington youth product Eribe Doro to choose from.

Strengthening those front row options for 2022 as well – along with former Featherstone Rovers forward James Harrison – is Joe Bullock, who has made the switch from Wigan Warriors on a three-year contract and is relishing the opportunity he sees in this next chapter of his career.

“Especially when anyone leaves like a club like Chris Hill, he’s had a fantastic career so he’s always big boots to fill,” Bullock told Sky Sports. “Luckily, there’s a lot of good players who can hopefully spread that load and fill that position.

“It’s going to be a challenge. Like any start of the year, everyone’s battling out for those starting places and it’s a ruthless game and the best players get it in the end.

“Hopefully we can have a good pre-season, everyone can push each other, and we can improve, and the best players will get that starting spot in the end.

“If Daryl Powell can help make me the player I want to be, hopefully we can both have a lot of success there and we will have a lot of good memories to look back on.”

Released by Wigan as a junior, the Blackpool native attracted the attention of Super League clubs on the back of some impressive performances during five seasons playing for Barrow Raiders in League One and the Championship between 2014 and 2018.

Prior to opting to join the Warriors, his only previous experience in a full-time playing environment had come during a short spell with Leigh Centurions, but he made the transition well enough to be handed a place in Adrian Lam’s matchday 17 for the 2019 season-opening derby against St Helens.

In total, the 28-year-old made 57 appearances for the Cherry and Whites, scoring two tries, and while he is in no doubt he has come on leaps and bounds both on and off the field during that time, he believes he still has plenty more to learn to become a more rounded player.

“To come in the top level and in a full-time environment with a big club like Wigan was something that was one of the challenges I had to transition to, but I really enjoyed it,” Bullock said. 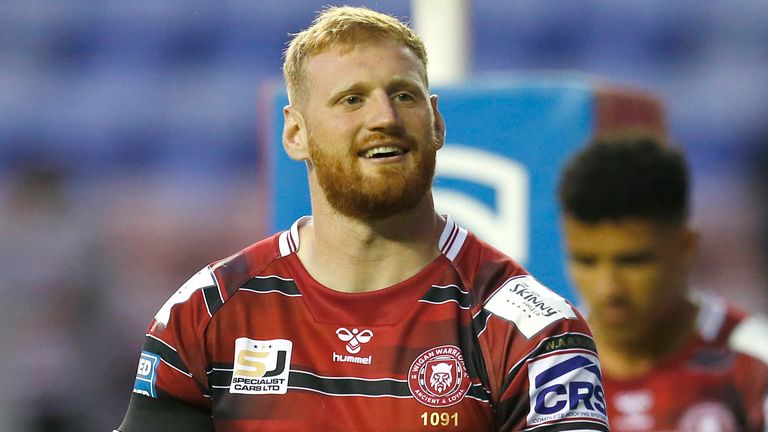 If Daryl Powell can help make me the player I want to be, hopefully we can both have a lot of success there and we will have a lot of good memories to look back on.

“I think they’ve made me a better player all around – not just on the field but with my professionalism and things like that, so it has been a good experience.

“By far I’m not the most rounded player, so there’s so many things to improve and I’m still quite young in the perspective of a prop forward playing Super League.

“There are some good players at Warrington I can look at and learn off, like a Cooper and Philbin. Hopefully, they can teach me some new things, and I can learn off them and progress myself and just work hard to become a more rounded player I want to be.”

Bullock had an opportunity to stay with Wigan, but decided it was time to move on. Nevertheless, he remains grateful for the chance afforded to him by the Warriors to test himself at Super League level and looks back fondly on large parts of the past three seasons.

Among those was an appearance, albeit on the losing team, in the Grand Final in 2020 and he wants to get back to the showpiece game with Warrington, not least of all because that match was played behind closed doors in Hull due to Covid-19 restrictions. However, it was the semi-final against Hull FC where the lack of a crowd was most noticeable.

“It was the biggest game of my career – a knock-out game to get to a Grand Final – and as we walked out there was just no atmosphere whatsoever,” Bullock said.

“There wasn’t even any music or any flames, but they made a bit more of a spectacle out of it for the Grand Final so even though there wasn’t that atmosphere with the crowd, it still felt that there was an atmosphere and a bit of a buzz about what we were about to do.

“I think with the Grand Final, it was a great, intense match, but it just lacked that experience of going to Old Trafford and playing in front of a crowd and that’s something that I’ll still want to tick off the box.

“It’s all experiences; I think they’ve made me better as a player, and hopefully I can take them into Warrington now and create some even better experiences.”