Patrick Mahomes threw for 258 yards and three touchdowns for the Chiefs, while the Steelers turned the ball over three times on offense; in more concerning news for Kansas City, they lost starting running back Clyde Edwards-Helaire to a collarbone injury

The Kansas City Chiefs claimed an eighth-straight victory and clinched a playoff berth as AFC West division champions after a 36-10 thrashing of a sorry Pittsburgh Steelers outfit at Arrowhead Stadium on Sunday.

Patrick Mahomes threw for 258 yards and three touchdowns, while the Chiefs defense – who have given up just 13.3 points a game on average during their win streak – secured three takeaways and did not give up a touchdown until the final three minutes of the game.

Kansas City came away with 23 points off their first offensive possessions of the game, that streak only ending as Elliott Fry missed with a 39-yard field goal try shortly before half time. The Steelers, by contrast, were held scoreless in the first half, with Roethlisberger picked off by Charvarius Ward on their second series and Chris Boswell too missing with a 36-yard kick.

Things didn’t improve much after the break, with Diontae Johnson fumbling to set-up Byron Pringle second touchdown reception of the game – an impressive duck and weave seeing him evade several Steelers defenders on a 16-yard catch and run to the endzone. 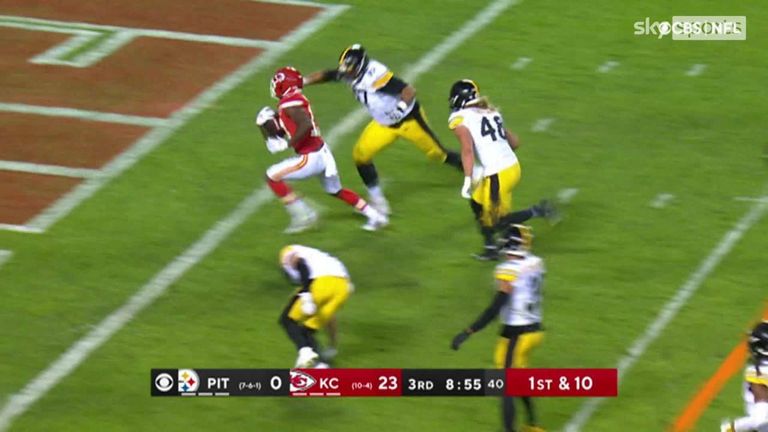 Byron Pringle twists and turns past the Pittsburgh Steelers defense to escape into the endzone for the Kansas City Chiefs.

Byron Pringle twists and turns past the Pittsburgh Steelers defense to escape into the endzone for the Kansas City Chiefs.

Boswell finally put Pittsburgh on the board with a 34-yard field goal with three and a half minutes left in the third quarter, only for Fry to fire through two further kicks of his own, one coming after a Big Ben fumble, to see Kansas City up 36-3.

Roethlibserger did find Johnson for a garbage-time touchdown late on, but the damage was already done. The Steelers drop to 7-7-1 and out of the AFC playoff picture, while the Chiefs stay No 1 in the conference currently at 11-4.

In some more concerning news for the Chiefs ahead of the playoffs, they lost starting running back Clyde Edwards-Helaire, who ran in their first TD of the game, to a collarbone injury. 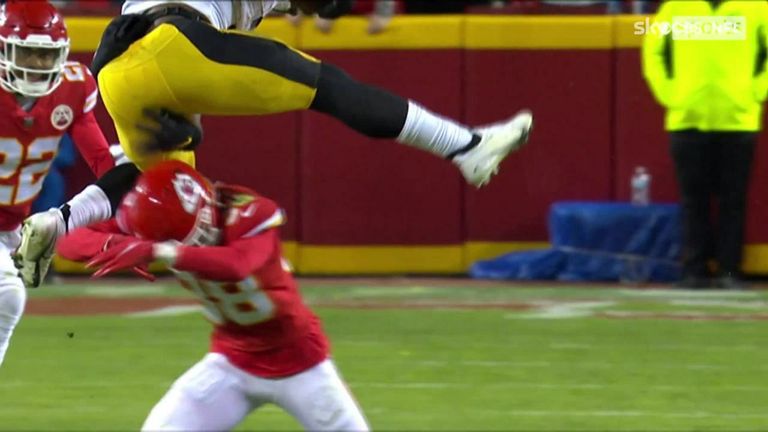 Najee Harris showed some exceptional agility with this leap over a Kansas City Chiefs defender for the Pittsburgh Steelers.

Najee Harris showed some exceptional agility with this leap over a Kansas City Chiefs defender for the Pittsburgh Steelers.

The Chiefs (11-4), despite having clinched the AFC West, will still be desperate to win their final two fixtures as they look to secure the No 1 seed in the conference and, as such, home advantage through the playoffs. They’re on the road though for the final two weeks of the season, firstly facing the Bengals (9-6) in Cincinnati before a meeting with the Broncos (7-8) in Denver.

The Steelers (7-7-1), meanwhile, are still battling to win their own division, or at least claim a Wild Cart spot, and they have two key AFC North matchups to finish out as they first host the Cleveland Browns (7-8) on Monday Night Football next week, before travelling to the Baltimore Ravens (8-7) on the final NFL Sunday of the season.