Manchester City returned to the top of the Premier League with a 3-0 home win over Brighton thanks to three second-half goals.

Liverpool’s victory over Manchester United on Tuesday had knocked the champions off the summit, but Pep Guardiola’s side responded with victory over the Seagulls to move a point above the Reds with six games to go.

After a frustrating goalless first half, City took the lead in the 53rd minute through Riyad Mahrez whose shot deflected off Joel Veltman and looped over goalkeeper Robert Sanchez.

City’s second also came courtesy of a deflection, as Phil Foden’s strike from distance (65) went in off a defender to find the bottom corner.

Bernardo Silva curled in a third with eight minutes left to ensure the title race remains in City’s hands.

City started the night in second, two points behind Liverpool and were looking to bounce back from Saturday’s FA Cup semi-final defeat to Jurgen Klopp’s side.

But Guardiola’s team faced a Brighton side full of confidence, having won their last two games at Arsenal and Tottenham, as they frustrated City in the first half.

Such was Brighton’s resistance, City were restricted to speculative efforts as Kevin De Bruyne fizzed a 25-yard shot just past the post while Bernardo Silva dug out a curling effort just inside the box that was pushed away by Sanchez.

Guardiola made a substitution at half-time as Ruben Dias made his return after seven weeks out with a hamstring injury, as the Portuguese defender replaced Nathan Ake.

The tension at the Etihad was lifted eight minutes into the second half, when De Bruyne’s superb driving counter-attack run found Mahrez, who scored on his 250th Premier League appearance thanks to a couple of fortunate deflections.

Just 12 minutes later, Foden doubled their lead for his 12th goal in all competitions.

Then in the 82nd minute, after Brighton had made a mess of playing out from the back, De Bruyne set up City’s third as he flicked on Oleksandr Zinchenko’s pass to Silva, who curled his effort past Sanchez.

Kevin De Bruyne made his 300th appearance for Manchester City against Brighton. Usually, players approaching such a milestone for one club will be winding down, allowing the younger guns to come through and drive the team forward. Not De Bruyne.

He is playing some of the best football of his career on current form. You could easily make the argument that he is currently the best midfielder on the planet, perhaps even the best player in the world. His performance against the Seagulls was another example of his greatness.

He has now been directly involved in six goals in his last five Premier League games. When Manchester City needed inspiration in what was looking like a nervy evening, De Bruyne took responsibility and found a change of gear needed to set up the all-important first goal.

For most of the match his direct running through the Brighton midfield was impossible to stop and on 53 minutes he left three Brighton defenders in his wake before a somewhat lucky ricochet sent through Riyad Mahrez who finished with the help of a deflection. You make your own luck though.

There was nothing fortuitous about the third goal that De Bruyne assisted with a drool-inducing flick to somehow find Bernardo Silva in space who finished impeccably from the edge of the box.

No player has ever won the PFA Player of the Year award three years on the spin but his end-of-season brilliance could turn the vote away from Mohamed Salah, who has been odds-on favourite for the award for many months now. It could be a close race. In this kind of mood, there aren’t many better in world football than the City star.
Lewis Jones 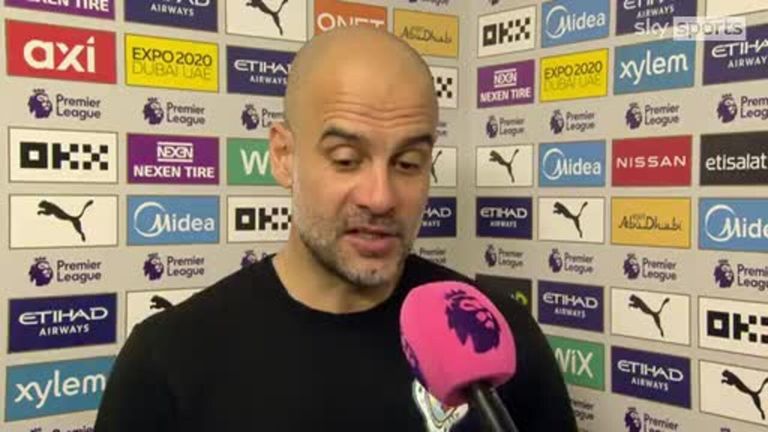 “It was an incredibly good result against a team that beat Arsenal and Tottenham away. We didn’t concede a lot and we were incredibly aggressive. We showed ourself that we are a decent team when we do what we have to do.

“When he [De Bruyne] is mentally ready and fit he is a player who is incredibly special. It was an incredible performance.

“Some people aren’t pleased when we lose but I am always pleased with my players. We have had six years together and the last five has been outstanding. Sometimes we can win, we can lose, but we give everything.” 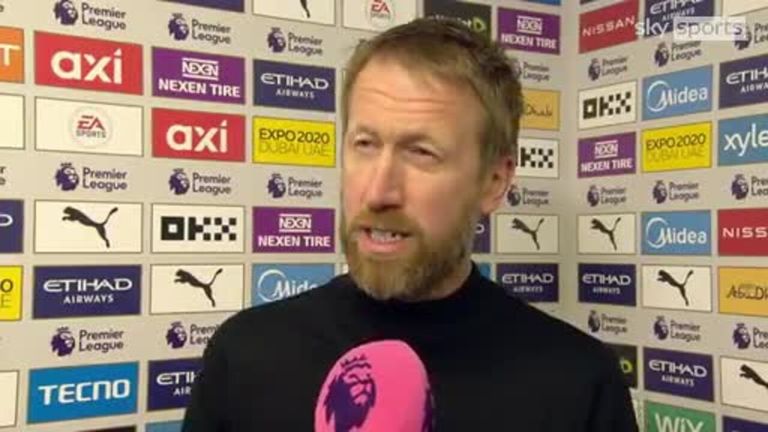 Graham Potter says he was proud of his Brighton team’s performance against City, but admits they weren’t good enough to get a result

“We defended really well but we didn’t play as well as I think we can. Credit the opponent but we didn’t hold possession well enough. We didn’t manage to maintain any attacks or create any pressure.

“In the end, the quality of opponent means you are going to concede. I can’t fault my players but the better team won, clearly. There is no shame from that. We have to learn from it.”

Man City are back at home on Saturday when they host Watford at the Etihad; kick-off 3pm. Brighton will be in Premier League action on Sunday when they take on Southampton; kick-off 2pm.

To be rearranged: Wolves (a) Premier League