Steve Clarke says Scotland are yet to achieve their “ultimate aim” of qualifying for the Qatar 2022 World Cup after gaining a play-off spot.

A qualification play-off place was guaranteed for Scotland with a 2-0 win over Moldova in Chisinau, their fifth consecutive win which secured second spot in Group F.

Clarke’s team are looking to boost their chances of sealing a home semi-final when they host group winners Denmark at Hampden Park on Monday, live on Sky Sports.

As the prospect of booking their place at a second successive major tournament and their first World Cup since 1998 looms large, Clarke says his side are staying grounded and focused on the task ahead.

He said: “The players are feeling good about themselves, as they should do.

“But they also know that we want to finish the campaign well so we’ve been fully focused the last 24 hours on the Denmark game and that will just ramp up towards kick-off.

“The ultimate aim is to get to Qatar 2022. We are in a position coming out of the group stage where we are still involved going into the March play-off games.

“We realised that second place was attainable, five consecutive victories have made sure that we’ve secured that one but the ultimate aim is still ahead.”

When asked whether a home semi-final crowd for the play-off next March could boost Scotland’s chances of reaching the World Cup, Clarke drew a comparison with the 3-2 victory over Israel in October when 50,585 supporters saw Scott McTominay net an injury time winner to keep their qualification hopes alive.

Clarke added: “The atmosphere in the Israel game was great, the fans were fantastic and probably helped us over the line towards the end of the game when we got the late winner. 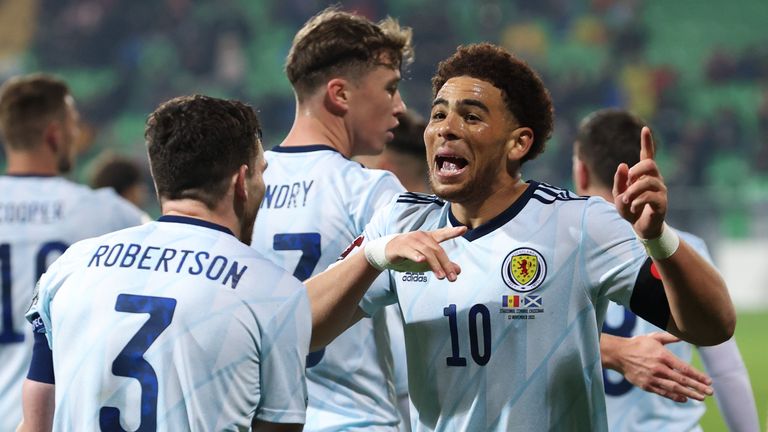 “The atmosphere after that was good but we have also shown that we can go away from home and dig out a victory in difficult circumstances, so if ultimately we have to play away from home in the first game we won’t go there with any fear.”

Scotland will again be without McTominay (illness) for their final World Cup qualifying group game, and striker Lyndon Dykes is a doubt for Monday’s Hampden clash as he bids to overcome a knock and illness.

Clarke said: “Scott is definitely out. Scott hasn’t recovered enough from his virus. Lyndon didn’t do very much this morning. Lyndon, I would put at 50-50.”

Meanwhile, Anthony Ralston has won his first Scotland call-up, with the Scottish FA confirming on Sunday the Celtic right-back’s addition to the squad for Monday’s game.

Ralston has made 23 appearances for the Hoops this season after seizing his chance under Ange Postecoglou. The 22-year-old comes into the squad after Nathan Patterson picked up a suspension during Friday’s win over Moldova.

Motherwell’s Stephen O’Donnell is the other right-back in the squad but he is among eight players who are one yellow card away from missing the play-off semi-final.

Clarke said of Ralston’s call-up: “We lost Nathan [Patterson] to suspension so we needed cover in the right-back position. Anthony has had a terrific start to the season with Celtic and thoroughly deserves his call-up.

“I think I have shown that I can call upon players and start them in any game and Anthony is no different to anybody else.”

MPs will debate and vote on whether to approve the government’s new coronavirus restrictions on Tuesday, Jacob Rees-Mogg has confirmed. The measures, which are due…

Fleet will coexist with JetBrains’ IntelliJ line and serve as a lightweight code editor with a different take on IDE organization. JetBrains has begun an…

Standard aims to provide AI with a strong ethical basis that will not only protect but also promote human rights and human dignity. Metamorworks /…