Released by St Helens as a junior to return to the community game, Cross has progressed through Rochdale, Barrow and Widnes before landing a switch to Salford. “What I’ve learnt from going the long way round is don’t take anything for granted,” he said

There are few players who have taken as roundabout a route to Super League as Deon Cross, but the recent Salford Red Devils signing has learned plenty of valuable lessons along the way.

Released by St Helens as a junior, Cross could have perhaps been forgiven for thinking his chances of playing in the top flight had slipped through his fingers. Returning to community club Blackbrook, however, proved the starting point for his route back to the top.

Impressive performances for the National Conference League outfit led to him being picked up Rochdale Hornets ahead of the 2018 Championship campaign, moving to Barrow Raiders the following year and then signing for Widnes Vikings, where he has spent the past two seasons.

The 25-year-old now has a long-sought opportunity to establish himself in Super League after the Red Devils won the race for his signature, signing Cross for 2022 on an initial one-year deal, and will be heeding everything he has picked up on his journey thus far.

“I think going from part-time, where you’re working a full-time job and have to train on a night, now I’ve got this opportunity I just can’t take anything for granted,” Cross told Sky Sports.

“You’ve got to make sure you work hard, keep your place and earn a contract for the next season, but what I’ve learnt from going the long way round is don’t take anything for granted.

“The intensity is a lot higher and there are some really good players here, so you’re trying to get up to their level.

“It’s going to make me a better player as well and I’ve already learnt a lot off some of the wingers Salford have got, and I feel like I’m developing in that short space of time already as well.”

Cross gave a glimpse of his potential with six tries in as many appearances for Widnes in the curtailed 2020 Championship season and follow that up with 18 in 25 matches this year as the Vikings finished eighth, earning the player of the year honour from the club’s fans in the end-of-season awards.

Those two seasons at the Halton Stadium have seen the winger put his time off the field to good use as well, gaining personal training qualifications and combined his playing role with a challenging but rewarding day-job as an alternative education sports tutor for 14 to 16-year-olds.

“I was working as a college tutor at the time, doing personal training,” Cross said. “They asked me if I wanted to come on board and try it. 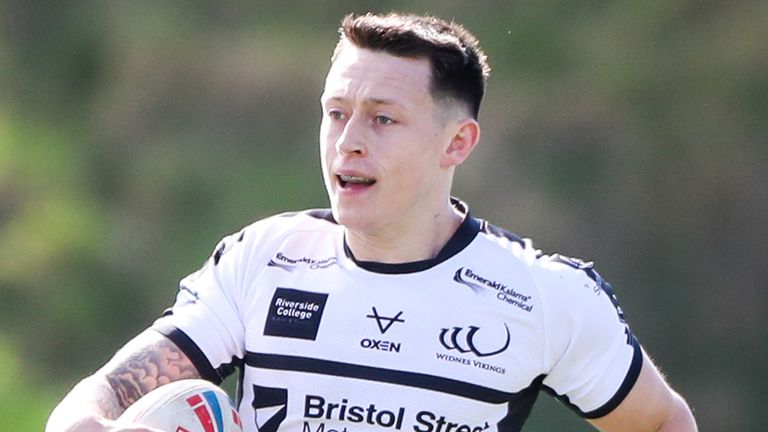 You’ve got to make sure you work hard, keep your place and earn a contract for the next season, but what I’ve learnt from going the long way round is don’t take anything for granted.

“It was a new challenge and it’s always tough trying to find a job you enjoy which fits around your rugby as well, because rugby was the priority for me, and work was always second. That fitted perfectly, so I used to do 8am until 4pm, then straight to training.

“It was challenging but rewarding in the end and I enjoyed it. It’s not like you’re working on a building site and so you’re tired at training, I was still pretty fresh and could perform at training as well.”

Cross’ first two weeks of full-time training with the Red Devils have already seen him pick up plenty of advice on improving his game from international wide men Rhys Williams and Joe Burgess, plus the 2021 Super League regular-season leading try-scorer in Ken Sio.

Along with feeling positive about the prospects of Salford repeating either their 2019 Grand Final or 2020 Challenge Cup final appearance despite an 11th-place finish this year, he believes he will be a good fit for how new head coach Paul Rowley wants the team to play.

Facing off against Toronto Wolfpack during his time with Rochdale, most notably in a narrow 18-17 loss at the Crown Oil Arena, during Rowley’s time in charge of the Canadian club has given him a good idea of just how that will work too.

“The teams Paul has coached come across as very old-school,” Cross said. “They’re tough and physical, but they play a nice brand of rugby where they will throw the ball about as well.

“It showed with Toronto, they could score tries from their own end of the pitch so that’s the main thing.

“It’ll be nice, especially on the wing, to get plenty of ball – which is what you want as a winger – then hopefully get across the line for a couple when I get my chance.

“I’ve just got to earn the right [to start], work hard in pre-season and train the best I can. I treat every session like it’s a game, so it’s making sure I prepare well and do all of those little extra things which help me.”