Joel Embiid is feared to have ligament damage in his right thumb – but will not let it keep him from playing in Game 4 against the Toronto Raptors.

The Philadelphia 76ers star is experiencing “severe pain and discomfort” according to reports and could get an MRI to assess the damage in near future.

The MVP candidate insists though that he will not let it stop him playing in Saturday’s Game 4, live on Sky Sports Action at 7pm.

NBA insiders Adrian Wojnarowski of ESPN and Shams Charania of The Athletic both mentioned in reports that there could be ‘ligament damage’ in reports late on Friday evening.

The Sixers plan to list him as available with “a right thumb sprain” for Game 4, but Embiid arrived to undertake his press duties almost a full two hours after Wednesday’s Game 3 ended. 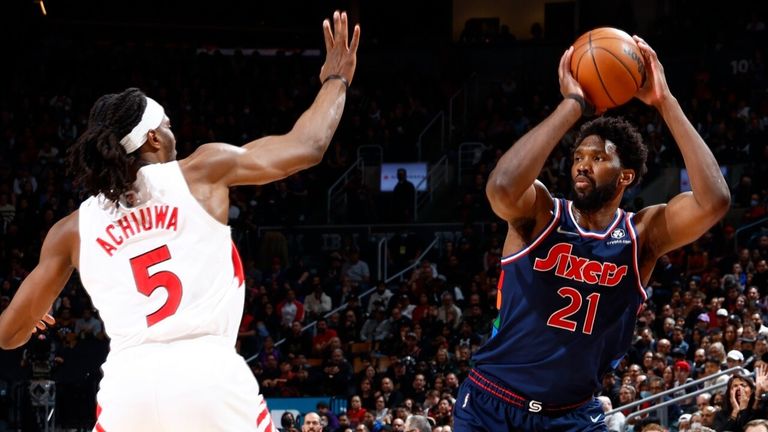 His arrival followed “a lengthy treatment session”, reports ESPN, and he was wearing a brace on his right hand with what appeared to be tape on his right thumb underneath it.

Embiid was then seen wearing a wrap on his right thumb at practice on Friday but is reportedly determined to play through the injury.

“I don’t know exactly know what happened,” Embiid said after Wednesday’s 104-101 victory, where he hit an epic game-winning 3-pointer in the final second of the game. “But I just started feeling pain and think I might have twisted it. So we’re gonna see what’s going on [Thursday].”

When asked if the injury could possibly impact his availability for Game 4, Embiid said, “No. No chance.”

“He’s good,” head coach Doc Rivers said after practice. “We did a lot of stuff … we just don’t want anybody to hit his arms and hands and all that. But he’s fine.”

The Sixers could afford to rest Embiid if needed, leading 3-0 in the series against Toronto.

The rush of live NBA Playoffs games continues on Sky Sports this week – see the list of games here and subscribe to watch the live action.

A flick of the kettle, another rummage in the fridge – for Boris Johnson it’s all too tempting when working from home.  In a renewed…

The UK’s prime minister is heading to the United Arab Emirates to pay his respects after the death of Sheikh Khalifa bin Zayed al Nahyan,…