It remains difficult to truly quantify the magnitude of Russell Westbrook’s blockbuster trade from the Washington Wizards to Los Angeles Lakers this past offseason. The NBA’s seismometer was blown to smithereens.

Indeed, we were still experiencing the fallout at the Los Angeles Lakers media day as LeBron James and Anthony Davis waxed lyrical about their newest co-star, who just so happens to be a proven leading man in his own right. George Clooney and Brad Pitt welcoming Matt Damon to the Ocean’s franchise. 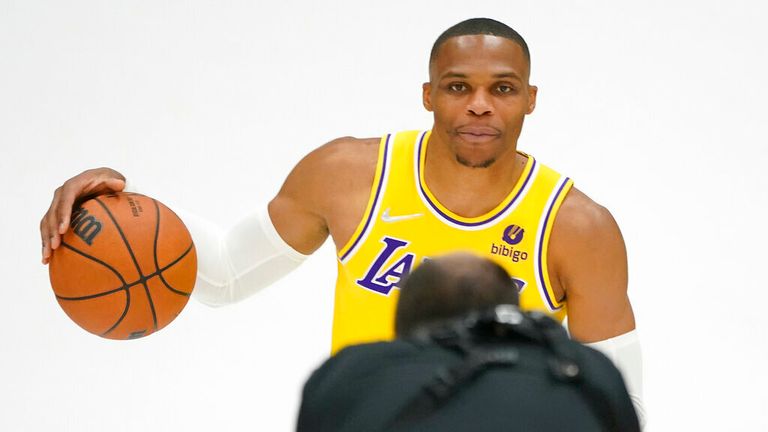 The moment the news was announced by those two seemingly-clairvoyant Twitter provocateurs, Shams Charania and Adrian Wojnarowski, it instantly altered the shape, rhythm and feel of the coming season.

It’s easy to forget that before injuries hobbled their title defence the Lakers were comfortable favourites in Vegas and everywhere beyond last year. Now here they come, back again, with Anthony Davis emphasising his health, LeBron James a year older – although you wouldn’t know it – and much wiser, and a nine-time All-Star, former MVP, superstar point guard backing them up to boot.

However, despite Westbrook’s earth-shattering résumé, fill to the brim with individual accolades and triple-double records but no actual silverware to speak of, he was far from forcing a move away from the struggling Wizards.

According to General Manager Tommy Sheppard there were no toys out of the proverbial pram nor was there any huff, puff and bluster from the star and his agent.

Only the glittering allure of the Lakers would do, otherwise Westbrook was happy to stay in Washington, slugging it out for a franchise that needed him – even if they offered no immediate path to the ultimate glory every player craves.

In footballing terms, this was much more Jack Grealish than it was Harry Kane.

In an interview with NBC Sports Washington’s Chris Miller, Sheppard stressed that Westbrook remained professional throughout the offseason and didn’t demand a trade to a contender despite the Wizards falling in the first round of the playoffs.

“I really have to make sure the record is straight on that,” Sheppard said. “He [Westbrook] just said, ‘If I can get to the Lakers, that’d be something I would love to do. If not, I’ll be back here.’

“I said, ‘What about the Clippers?’ He said, ‘Hell no.’ So Russell was happy being here and we were very grateful for him being here.”

Whether not wishing to be traded to the Los Angeles Clippers equates to true happiness remains to be seen. Although, in Westbrook’s defence, they are a certified contender with two perennial All-Stars of their own in the shape of Kawhi Leonard and Paul George. There’s a case to be made that a lot of other players likely would have jumped at the chance, Westbrook’s former backcourt partner Bradley Beal included.

Now more than ever the whole league is longing for their own superteam.

Perhaps unfortunately for Sheppard, the Lakers did eventually come calling with a trade package that included Kyle Kuzma, Montrezl Harrell and Kentavious Caldwell-Pope, along with the number 22 pick in this year’s draft (later traded to the Indiana Pacers for Aaron Holiday and Isaiah Todd).

Of course, this wouldn’t have happened without Sheppard initially exploring a trade on Westbrook’s behalf. And you can see why the Lakers hold such appeal to him personally given the fact Westbrook is a Long Beach native and former UCLA Bruin entering his twilight years without a championship to his name. 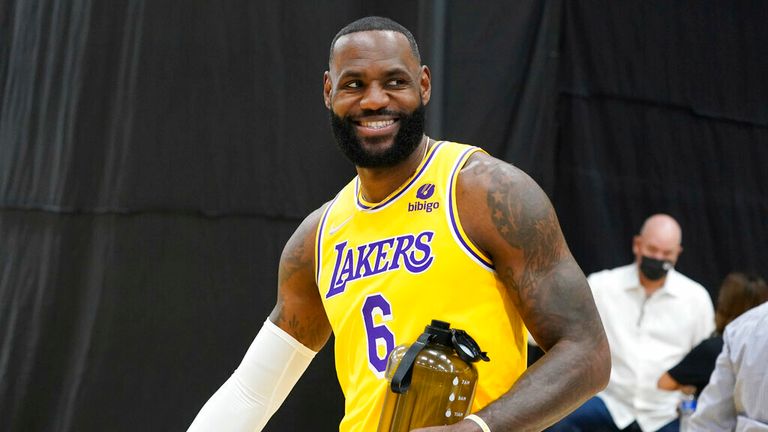 If you’re suiting up in the same jersey as LeBron James – not to mention Anthony Davis – chances are you’ll be reaching the Finals.

For the vast majority of the league hunting rings before they retire his name alone is enough to leave money on the table and up sticks. Of course it usually helps if the destination is either Miami or LA, rather than Cleveland. Just ask Dwight Howard, Carmelo Anthony, Trevor Ariza, Kent Bazemore, DeAndre Jordan and Rajon Rondo, who will all be adorned in the famous purple and gold this coming season.

For Sheppard, getting four valuable rotation pieces, including a former Sixth Man of the Year in Harrell, represented good value for Westbrook. At 32, and with $91m and two years remaining on a five-year supermax contract he signed all the way back in 2018, the point guard certainly fits the Lakers’ timeline far more than the Wizards’.

That being said, the GM still feels as though Westbrook is somewhat undervalued across the league given how he once again averaged a triple-double and transformed Washington through the second half of the season.

“You’re looking at the season Russell had, it’s a travesty he wasn’t All-NBA as well,” Sheppard said. 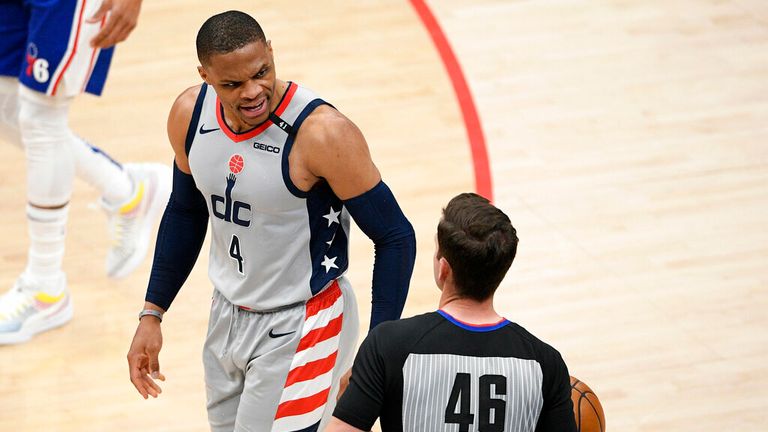 Russell Westbrook dropped 26 points, 10 assists and 12 rebounds, but it wasn’t enough as the Wizards lost game 3 of the Eastern Conference first-round playoff series against the Philadelphia 76ers.

“Bradley [Beal] deserved it more than anybody but I thought Russell, he should’ve had his flowers. The guy averaged a triple-double. He helped take this team to the playoffs when we were sitting pretty much in a situation where, look, I thought the season was over midway through.”

That’s as good a performance you can hope for from any point guard, especially Westbrook, who matched his eye-popping raw numbers with actual shooting efficiency. The Wizards still lost by 29.

If Sheppard needed any kind of confirmation that his team as assembled were lightyears away from competing in the East, there it was, carved into stone, hammer and chisel in the imperious hands of one Joel Embiid. 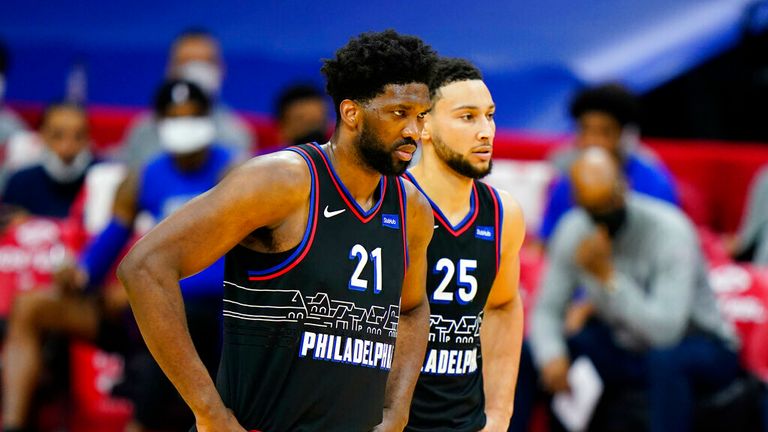 Joel Embiid said he was ‘disappointed’ with the Ben Simmons’ no-show at the Sixers media day, while Andre Drummond and Danny Green said Simmons was ‘still part of this team’.

Speaking of the Sixers, and given their ongoing Ben Simmons stand-off, the Westbrook trade could be cast into new light. It was, at first, a bolt from the bird-shaped blue. A fleeting rush of blood to the head, an “oh not the Lakers again.” Now it seems more substantial, more satisfying for all parties. The rare megatrade that could mean something more profound.

The Wizards have both more time and more talent to grow. Basketball fans have a mouth-watering Lakers and Nets superteam axis, whether to love or to loathe. And Westbrook has been nudged several steps closer to the prize he so covets… and perhaps ultimately deserves. It is no exaggeration to say that the new season will likely be defined, for better or worse, by this: his golden, career-defining opportunity.

Whether it works – it didn’t on the Rockets alongside James Harden, who sulked his own way out of Houston – is now down to him, no matter the age of the role players or the health and availability of Davis and James.

Over to you, Russ.

(Still. A bit harsh on the Clippers.)