The Warriors stormed into a 20-point lead on the back of French’s 22nd and 23rd tries of the season inside the first 20 minutes, but the Robins managed to claw their way back into the contest and hit back with a try from Ethan Ryan before the break at the DW Stadium.

The visitors were, however, not helped by seeing Will Dagger and Lachlan Coote joining their ever-mounting injury list in the first half, while debutants Connor Moore and Charlie Cavanaugh were both forced off after the break with injuries too.

There was no let-up from their opponents though and French went on to complete his hat-trick with his 24th try of the campaign, while Marshall added two more tries to his first-half score to take his tally for 2022 to 15 in Super League so far.

Warriors head coach Matt Peet had demanded a response from his team after Super League’s second-placed side had suffered a surprising 42-16 defeat away to Leeds Rhinos in their previous match, and there can be no doubt he got one.

It took Wigan less than four minutes to get the ball rolling with only their second attack of the game. A flowing passing move saw Sam Halsall put through a gap and he did well to stand up Lachlan Coote before offloading for French to grab his first. Harry Smith converted as the home side led 6-0.

The visitors were struggling to get into the game as Ben Crooks knocked on deep in his own half. From the resulting scrum the Warriors went over with Cade Cust looking like he was going to offload it to Field before floating a ball over for Marshall to stroll over. 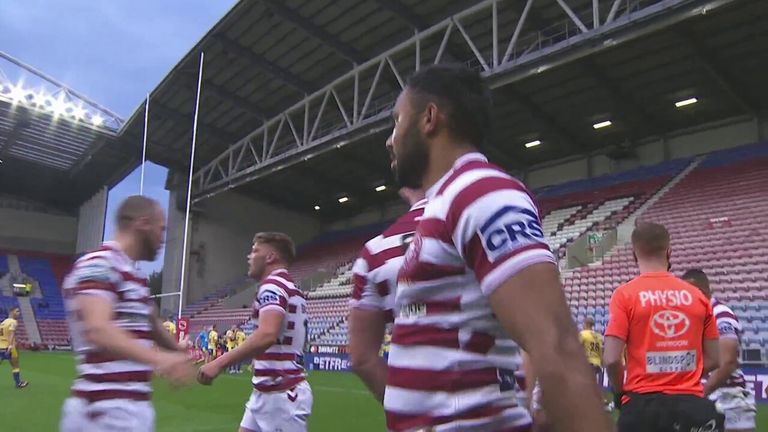 Sam Halsall came into Wigan’s starting XIII at centre, while Patrick Mago and Brad O’Neill were brought back into the team on the interchange bench.

It was all Wigan now and Marshall showed a lot of skill and strength to avoid being thrown into touch, he then sent a kick back infield and Mike Cooper was on hand to pick up the ball and barge over from close range for his first try in the Cherry and White shirt.

It looked like Wigan were not moving out of second gear, and although Hull KR failed to create many chances, they did cross over in the 31st minute.

Coote and interchange man Phoenix Laulu-Togaga’e – on for the injured Dagger – combined to set up on Wigan’s line. Rowan Milnes then put in a cross-field kick and Ryan leapt over to get the Robins on the board.

Wigan continued their dominance at the start of the second half. French was causing mayhem on the right as he searched for his third. He showed some neat footwork and put in a grubber kick before finally sending a pass out for Kai Pearce-Paul to score to make it 26-4. 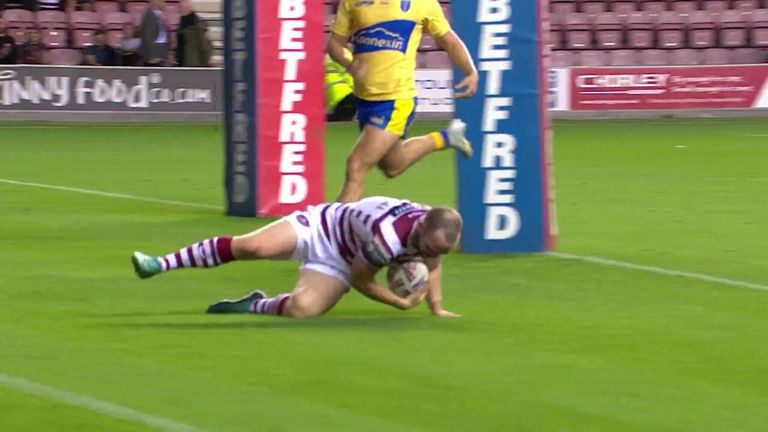 Hull KR refused to give in, but their final pass was not good enough at times and, with ball in hand, the Warriors were stretching the visitors all across the park.

After Halsall was tackled on the right, the ball went left and Smith and Liam Farrell combined for Marshall to grab his second of the night as they led 30-4.

French completed his hat-trick in the 64th minute as he collected a sublime pass from Smith to outpace the Rovers defence and touch down in the corner.

Mago then got the biggest cheer of the night as he barged over from close range for his first club try, before Marshall ended the scoring with his third as the Warriors ran out comfortable winners. 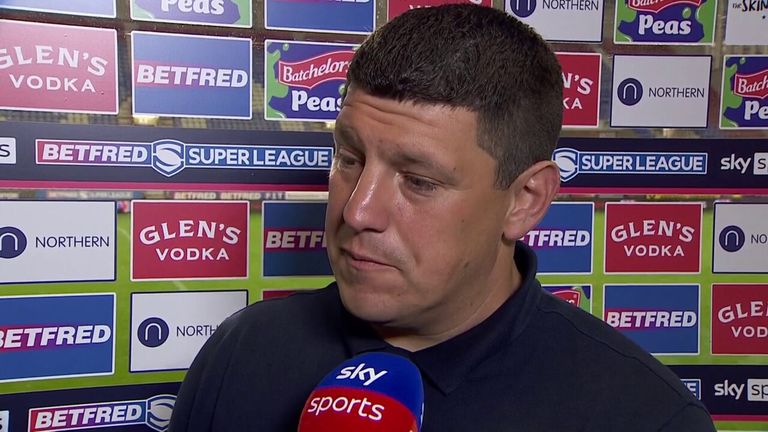 “I wasn’t happy at half-time, so after the lads spoke, I said my piece. I thought we lost a bit of respect for the game and went away from some of the things we said we were going to do, so it was important the players were aware of it.” Hull KR interim head coach Danny McGuire says his team’s injury crisis is on another level as four more players were added to their injury list.

Hull KR interim head coach Danny McGuire says his team’s injury crisis is on another level as four more players were added to their injury list.

“I’m really proud of the lads. We’ve faced a lot of adversity over the past few weeks and it’s almost not believable the amount of people we’ve got on the sidelines.”

Both teams are live on Sky Sports again next week, with Wigan at home to Warrington Wolves on Friday, August 5 (8pm). Hull KR, meanwhile, host Toulouse Olympique the night before (8pm).