Giannis Antetokounmpo scored 47 points and Khris Middleton tied Milwaukee’s record for career 3-pointers as the Bucks beat the Los Angeles Lakers 109-102 on a busy Wednesday night in the NBA.

The Greek Freak also pulled down nine rebounds and dished three assists in 36 dominant minutes on court. He finished the night shooting over 75 per cent from the floor, including 3-of-4 from distance.

Middleton returned after missing eight games due to COVID-19 and made consecutive 3-pointers 30 seconds apart early in the fourth quarter to put the Bucks ahead for good. The second of those threes was his 1,051st with the Bucks to match Ray Allen for first place on the team’s list.

Allen holds the NBA record with 2,973 3-pointers in a career that also included stints with the Seattle SuperSonics, Boston Celtics and Miami Heat.

The Greek Freak obliterated the Lakers.

The first time a player has dropped 45 points on 75 FG% on the Lakers since Shaq did for the Magic in 1995.

Bobby Portis added 17 points for the Bucks. Middleton and Pat Connaughton had 16 each.

LeBron James missed an eighth straight game for the Lakers due to an abdominal strain. The Lakers have gone 3-5 during that stretch.

Talen Horton-Tucker scored 25 points for the Lakers two nights after getting a career-high 28 in the loss to Chicago. Russell Westbrook had 19 points, Malik Monk 11 and Carmelo Anthony 10.

Devin Booker scored 24 points, Deandre Ayton had 19 points and 13 rebounds and Phoenix beat Dallas for its 10th straight victory – the longest winning streak for the Suns since the 2009-10 season.

Chris Paul drove to the basket and was about to fall out of bounds before finding Ayton for the dunk and a 100-96 lead with 1:27 left. Paul had seven assists in the fourth quarter and finished with 14. Booker hit a long 3-pointer with the shot-clock expiring with 50 seconds left to seal it as Suns scored 37 points in the fourth quarter to take the win.

Dallas lost for the second time in the last seven games. The Mavericks were playing their first game this season without star guard Luka Doncic, who suffered sprains to his left knee and ankle in the waning moments of a victory over Denver on Monday. Patty Mills added 21 points to give the Nets four 20-point scorers for the first time this season. Brooklyn improved to 11-5 with its eighth victory in 10 games.

Ricky Rubio led Cleveland with 25 points, Darius Garland added 24 and Kevin Love, Cedi Osman, and Dean Wade each had 11. The Cavaliers dropped to 9-7.

Jimmy Butler had a triple-double in his return from a sprained right ankle, finishing with 31 points, 10 rebounds and 10 assists in Miami’s victory over New Orleans. 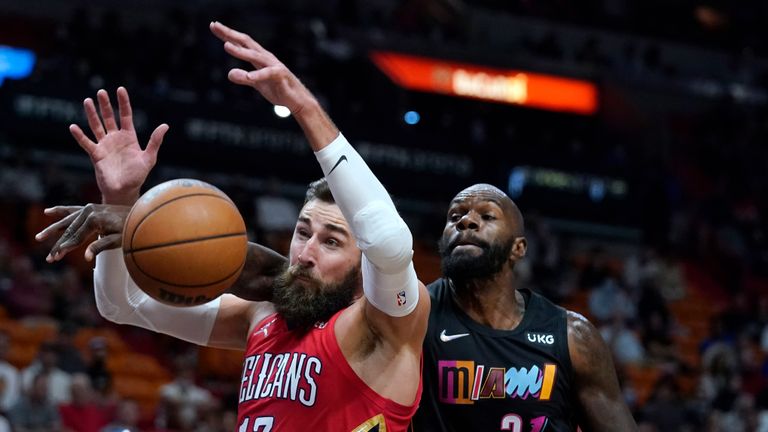 With Miami without starters Bam Adebayo (bruised left knee) and Kyle Lowry (rest), Butler shot 10 of 12 from the field and made 10 of 12 free throws after missing the previous three games.

Tyler Herro scored 17 of his 19 points in the second half, and Max Strus added 15 points for the Heat. Herro also hit three 3-pointers, including a mid-court pass intended for Butler that landed inside the rim.

Nickeil Alexander-Walker scored 24 points, Brandon Ingram added 19 points and Josh Hart finished with 18 points for the Pelicans. They are 2-14. 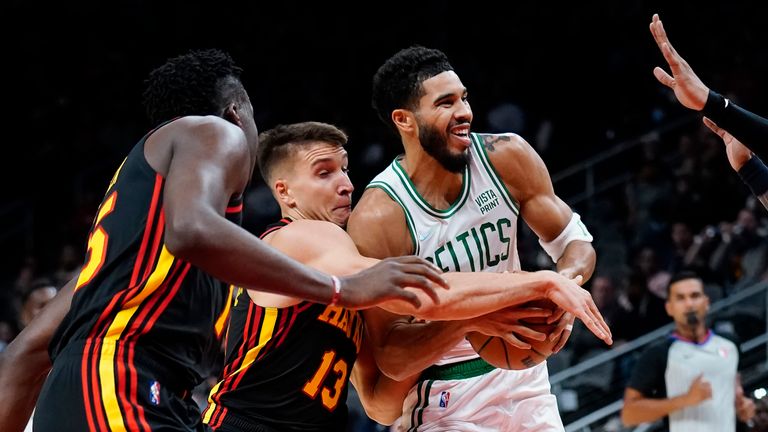 Trae Young chipped in with 18 points and 11 assists as the Hawks used a balanced attack to overcome a 34-point performance by Jayson Tatum.

The Celtics missed a chance to climb above .500 for the first time this season. With Robert Williams out with an injury, Grant Williams stepped in to score 18 points for the Celtics. Jaylen Brown (right hamstring strain) also missed his sixth straight game.

The Hawks improved to 6-1 at State Farm Arena and 7-9 overall for the season. Terrence Ross scored 19 points off the bench and rookie Jalen Suggs added 13 for the Magic. They snapped a three-game losing streak. Orlando trailed 96-94 with 1:54 left but stunned the Knicks by outscoring them 10-2 the rest of the way for their second road win of the season – both at Madison Square Garden.

RJ Barrett scored 17 points and Mitchell Robinson had 13 points and 11 rebounds for New York, which has lost four of six. The Knicks had 18 turnovers and fell to 3-5 at home. Dort made 14 of 22 shots and had the second-best points total of his career. Shai Gilgeous-Alexander had 15 points, nine assists and seven rebounds.

The Rockets have lost 13 straight. Houston beat Oklahoma City about a month ago for its only win of the season.

Anthony Edwards scored 16 of his 26 points in the fourth quarter and Karl-Anthony Towns had 22 in Minnesota’s victory over Sacramento. Patrick Beverley added 14 points, six rebounds and six assists for Minnesota, which lost eight of its previous nine games. Edwards hit four 3-pointers in the fourth to push Minnesota to just its third win in 10 at home.

De’Aaron Fox had 28 points for the Kings and Buddy Hield finished with 16 off the bench. Sacramento had a season-high 20 offensive rebounds but lost for the fifth time in six games.

Cade Cunningham added 16 points for Detroit, and Saddiq Bey had 15 for the hosts, which picked up a fourth win of the season. 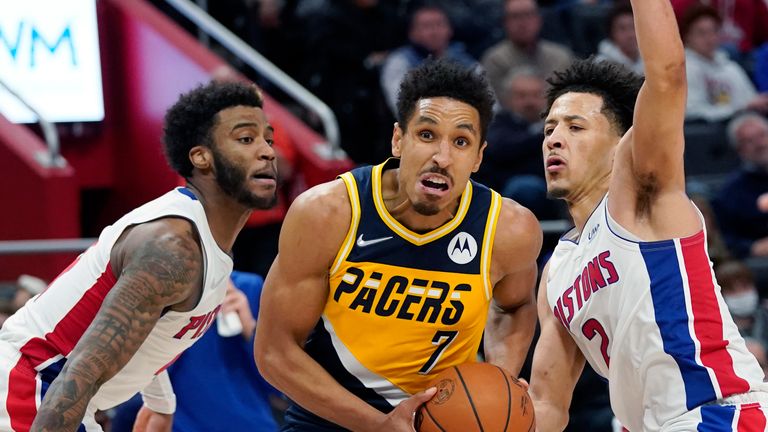 Both teams shot below 43 percent from the floor and under 30 percent on 3-pointers.

Blazers come back from 20 points down to beat Bulls

Damian Lillard registered 22 points and 10 rebounds and the Portland Trail Blazers overcame a 20-point deficit to win against Chicago Bulls on Wednesday night. 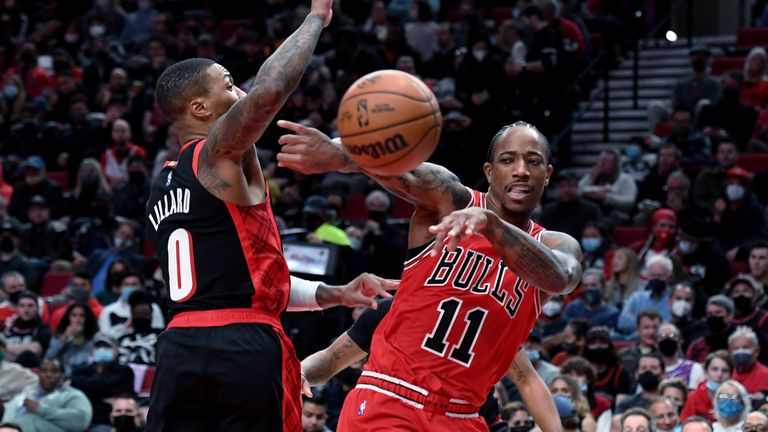 Zach LaVine made seven 3-point baskets while scoring 30 points for the Bulls, who fell to 2-2 on a five-game road trip. DeMar DeRozan added 22 points, Lonzo Ball scored 17 points and Alex Caruso had 12 points, 10 rebounds and nine assists for Chicago.