“I don’t know how we can go from one track and them being half a second ahead to them being behind,” says ecstatic Lewis Hamilton of Red Bull; Hamilton “trusts judgement” of Mercedes after grid penalty; watch Sprint live on Saturday at 7.30pm on Sky Sports F1

Lewis Hamilton was delighted to have topped qualifying for the Sao Paulo GP, with the Mercedes driver to start first ahead of Max Verstappen in the Sprint

Lewis Hamilton was delighted to have topped qualifying for the Sao Paulo GP, with the Mercedes driver to start first ahead of Max Verstappen in the Sprint

Lewis Hamilton said he was surprised yet delighted by his big qualifying margin at the Sao Paulo GP on Friday, although championship leader Max Verstappen has put the gap down to the new engine that will see Hamilton moved down the grid later on this weekend.

While Hamilton does not take an official pole for his one-lap efforts, his 0.438s advantage over Verstappen was his biggest of the season in a dry shootout and he will head the field for Saturday’s 24-lap Sprint before taking his five-place grid penalty for Sunday’s showpiece race.

Hamilton said his new engine, fitted to boost his chances over the next four rounds, was a late decision from his Mercedes team but he “trusts their judgement” and he was thrilled with their Friday performance afterwards.

Just five days after Mercedes were outpaced by Red Bull in Mexico City, the scale of Hamilton’s dominance was somewhat unexpected – and a welcome boost for the man who trails Verstappen by 19 points in the title race.

“I loved today, for sure,” said a beaming Hamilton at Interlagos. “We’re working so hard to try and get this car right.

“I was sitting in [practice] for the whole hour trying to make the right set-up change, the anxiety you get is crazy. A lot of the time I get it wrong, but today I got it right. The car was really nice to drive.

“I don’t know how we can go from one track and them being half a second ahead to them being behind. But they’ll be very strong in the race. I hope Valtteri (Bottas) gets a good start.”

Red Bull, meanwhile, insisted they were just delighted to beat Bottas, Hamilton’s Mercedes team-mate, to the front row – knowing full well that second place in the Sprint will become pole for Sunday’s race due to Hamilton’s penalty.

They also believe the big gap was down to the new engine, Hamilton’s fifth of the season. 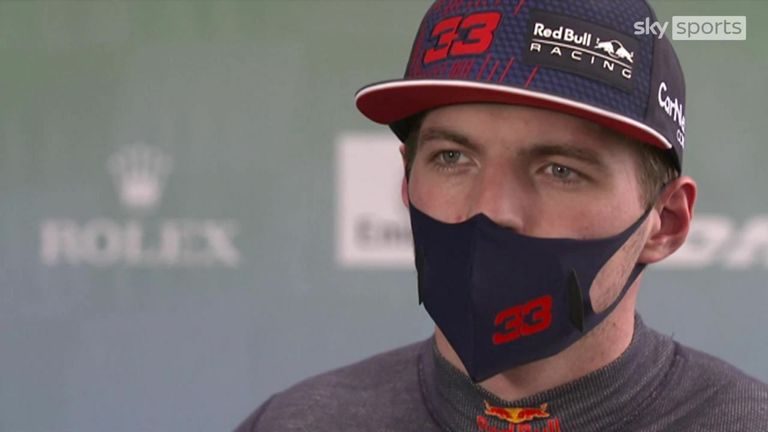 “Not necessarily [surprised],” said Verstappen. “They’ve got a new engine so we know of course the first weekend, they can definitely put a bit more power in it, and around here that can make a difference.

“It’s nothing shocking. Of course I would have liked to be ahead, but overall second is good.”

“I think second was the best we could hope for,” added team boss Christian Horner. “That fresh engine is obviously pumping out some horsepower for them.”

Longer runs should bring Mercedes and Red Bull closer together, and Hamilton admitted he does not know if his qualifying advantage would “translate to the race”.

There is one more practice session on Saturday before the F1 Sprint, the third and final one of the season, live on Sky Sports F1 from 7.30pm.