Hansen’s victory moves him to 43rd in the Race to Dubai standings and sees him qualify for the European Tour’s season-ending DP World Tour Championship; Francesco Laporta and Bernd Wiesberger finish tied-second

Joachim B Hansen secured his second European Tour title with a narrow victory at the AVIV Dubai Championship.

Hansen carded a four-under 68 on a tense final day at Jumeriah Golf Estates, posting four birdies in a blemish-free round to end the week on 23 under and claim a one-shot win.

Overnight co-leader Francesco Laporta and Bernd Wiesberger finished in tied-second, while Andy Sullivan played his last six holes in seven under to jump into a share of fourth alongside Min Woo Lee, Jazz Janewattananond and defending champion Antoine Rozner 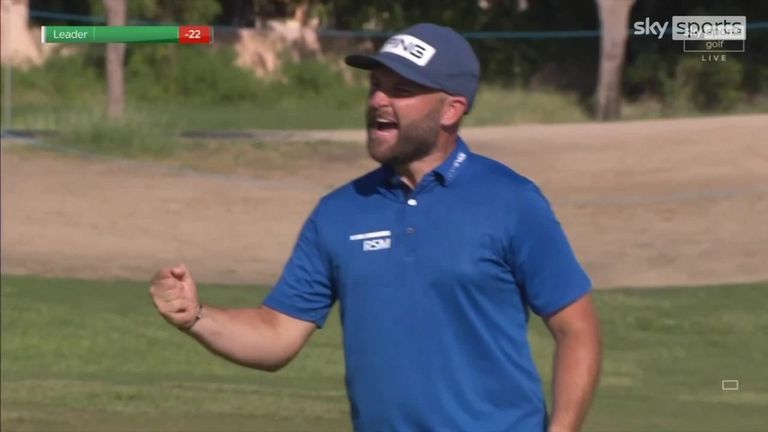 Andy Sullivan played the last six holes of the AVIV Dubai Championship in seven under, with a final-hole eagle enough to secure a spot for the season-ending DP World Tour Championship.

Andy Sullivan played the last six holes of the AVIV Dubai Championship in seven under, with a final-hole eagle enough to secure a spot for the season-ending DP World Tour Championship.

Hansen started the day tied for the lead but edged ahead with a 10-foot birdie at the par-four first, where Rozner also picked up a shot to move alongside Laporta in tied-second.

The final group all exchanged pars over the next five holes, while Kalle Samooja – playing in the group behind – responded to a bogey at the third by posting three consecutive birdies from the fifth to briefly get within one of the lead.

Hansen holed a putt from off the green to match Rozner and Laporta’s birdies at the par-five seventh, moving him to 21 under, with the Dane then doubling his advantage after making a close-range birdie at the tenth.

Laporta responded by birdieing the par-three next and joining Hansen in taking advantage of the par-five next, while Wiesberger joined him in tied-second when he birdied five of his last seven holes to close a final-round 65 and set the clubhouse target at 22 under.

Hansen converted a difficult par-save at the 17th to retain a one-shot lead heading to the par-five last, where a two-putt par was enough to complete a memorable victory and also secure a last-minute invite into next week’s DP World Tour Championship.

Laporta was unable to find a final-hole birdie that would’ve forced a play-off, seeing him sign for a blemish-free 69, while Rozner dropped back to 20 under despite cancelling out a double-bogey at the 15th by birdieing two of his last three holes.

Padraig Harrington ended the week in tied-eighth after a bogey-free 67 and Tommy Fleetwood finished a further stroke back in a share of 13th alongside Martin Kaymer, while Paul Casey dropped down the leaderboard following a level-par 72.