To both his admirers and critics, James Harden looked awfully familiar.

To his admirers, he handled scoring and play-making duties with stunning accuracy. To his critics, he earned trips to the free-throw line by either flailing or invading an opponent’s airspace. Add it all up in the Brooklyn Nets’ 122-115 win over the Los Angeles Lakers on Christmas Day, and Harden collected a triple-double in points (36), assists (10) and rebounds (10) much in the same fashion he always has in his 14-year NBA career.

But Harden’s performance against the Lakers meant something much different than the other five triple-double performances he had logged this season. Harden fulfilled his usual job description despite missing the past four games, including three after entering the league’s Health and Safety Protocols.

“Very difficult,” Harden said. “Just because obviously we’re trying to avoid it, but whatever. Just being in the house and not being able to do anything. Then obviously when you have the opportunity to start working out, you got to get into shape and rebuild and reboot throughout the course of the middle of the season. It was difficult. But I’m just happy to be back on the court.”

Harden and the Nets are also happy that things went so seamlessly. It would have been understandable if things did not play out that way.

Harden said he spent the past 11 days in quarantine “doing a lot of nothing,” other than binging on video games and television shows. During that time, Harden may as well have just worn an oversized blue snuggie as he did during his postgame press conference.

So without having any chance to train during his absence, Harden spent his pre-game workout maximising his training.

Harden performed a series of stretches underneath the basket. Harden then completed various strengthening exercises with a resistance band. Harden then went through a shooting workout. Unlike for most of his performances during his career, Harden’s shots mostly clanked off the rim.

“That’s difficult, especially when it’s in the middle of the season and you get hit with this,” Harden said. “When you get back, you have to ramp up and hopefully continue to stay on pace and get your conditioning up and your wind back and all of this. It’s difficult. But to think everybody is going through it because this virus is spreading is so crazy. Hopefully it’s not too serious, and people are not really affected by it.”

Yet, Harden did not seem affected by his four-game absence and his rusty pre-game work once the game actually started. With the Nets still missing Kevin Durant, Kyrie Irving, LaMarcus Aldridge and four other players because of the protocols, Harden operated as the team’s go-to scorer. Even with that diminished depth that also included an injured Joe Harris (left ankle surgery), Harden distributed to other team-mates with just as much trust and effectiveness. 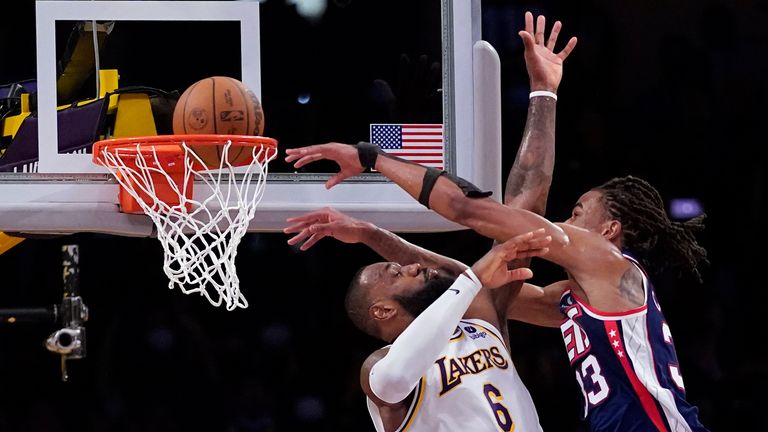 The most vivid example entailed Harden throwing a lob to Nic Claxton that ended with a dunk over Lakers star LeBron James, a play that gave the Nets a 118-115 lead with 40.7 seconds left after Claxton made the subsequent foul shot.

“I have all the trust in the world in each individual,” Harden said. “That’s what makes us good.”

Not everything went according to plan.

Harden committed four turnovers. He earned a Flagrant Foul 1 with 8:44 left in the fourth quarter after shoving his right forearm into Talen Horton-Tucker’s groin. Following that play, an enraged Lakers team went on a 17-5 run that included James finishing at the rim without Harden making any effort to contest the shot. Harden also faulted the Nets’ fourth-quarter offensive miscues, saying, “I wasn’t attacking the paint and getting to the rim as I had done the previous three quarters for whatever reason.”

Those moments did not fully blemish Harden’s overall performance, though. Harden progressed significantly after experiencing what Nets coach Steve Nash called a “big challenge” this season for varying reasons.

The Lakers were on the verge of a miraculous fourth-quarter comeback until Nic Claxton decided to put LeBron James on a poster.

Harden spent the offseason healing from a right hamstring injury that sidelined him for a combined 18 games. That included missing Game 2, 3 and 4 of the Eastern Conference semifinals against the Milwaukee Bucks after injuring it only 43 seconds into Game 1.

Although Harden ranks second overall in assists (9.6), he has averaged 20.8 points on only 40.4 per cent shooting. That marks a noticeable dropoff from what he averaged in his career (25 points on 44.3 per cent shooting) and in his first season with the Nets (24.6 points on 47.1 per cent). 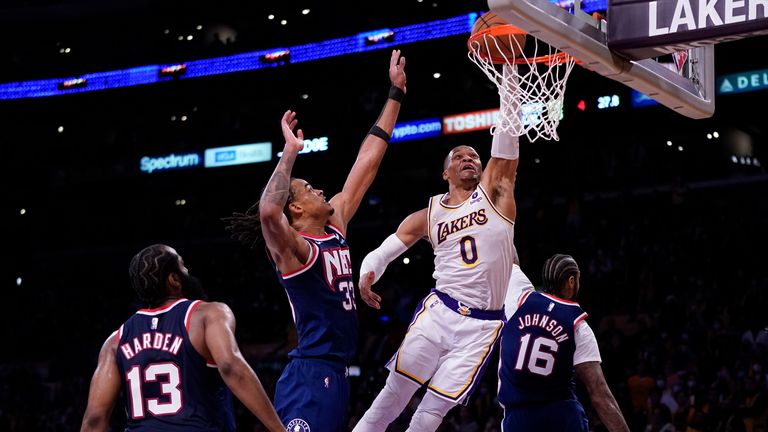 Not only has Harden adjusted to officials no longer rewarding him with foul shots as much in previous years because of their emphasis on not calling fouls in which shooters initiate contact and invade a defender’s airspace. Harden has also played the entire season without Kyrie Irving. The Nets initially declined to allow Irving as a part-time player because of his refusal to receive the COVID-19 vaccine that would forbid him to play in all home games because of New York City’s mandates.

“There’s been a lot thrown at him,” Nash said of Harden. “He’s continued to progress and get better and obviously overcome the latest interruption. He gets some fresh air today. But overall, I’m really pleased with his work to get back and to continue to improve throughout the season. He still can get better. We know that, so he’s eager and loves the game and has been working hard at it.”

Nash had no clarity on when Durant, Irving and Aldridge would advance out of the NBA’s protocols. Because of their diminished depth chart, the Nets have cleared Irving to become at least a part-time player until when or if he takes the vaccine. Nash predicted Irving’s part-time status at least will help Harden because he will have “another player out there to draw attention, to create space and to take pressure off of him.”

“Obviously we all know how special of a talent Kyrie is and what he means to this organisation and our team,” Harden said. “Just to be around him, even if it’s just for road games is going to be huge for us. It’s going to make all of our jobs a lot easier. We miss having him around. Obviously, he’s a very skilled basketball player. His personality around the team, we miss him.”

The Nets missed Harden, too. But despite his lengthy absence, it hardly took long for Harden to show the Nets what they missed. Harden offered some signs that Brooklyn could see an even better version of its star player in 2022.

“I just wanted to win; that’s all that matters,” Harden said. “It was a little difficult, but it is what it is. It’s what has been thrown at us. So just try to do whatever it takes to win.”