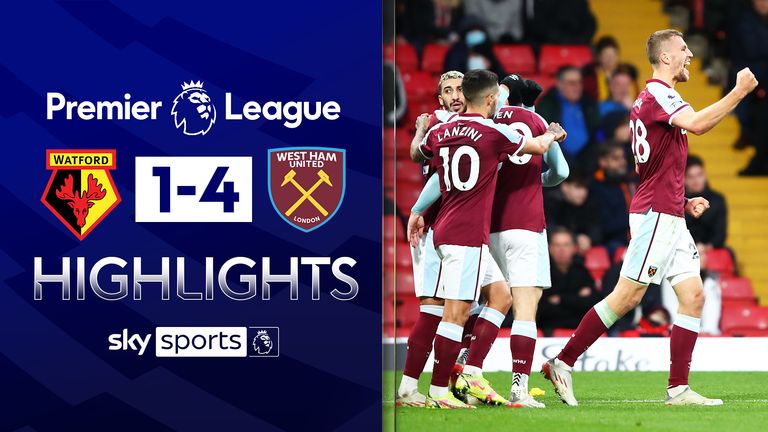 FREE TO WATCH: Highlights from West Ham’s win at Watford

West Ham were already well on their way to victory when Nikola Vlasic added their fourth goal against Watford at Vicarage Road but the Hammers will hope it is a significant moment for him.

The Croatian international has made only a modest impact since his arrival at West Ham from CSKA Moscow in a deal worth £33.5m last summer but perhaps his first goal for the club is a signal of bigger things to come in the second half of the campaign.

Vlasic has had to be patient. The forward, who had a spell at Everton in 2017/18, has only made two Premier League starts for the Hammers so far but fans have been encouraged by what they have seen recently and he certainly made his mark at Vicarage Road, turning home Jarrod Bowen’s cut-back in stoppage time following his 85th-minute introduction.

Bowen’s sparkling form is one of the reasons why Vlasic has struggled to hold down a place in David Moyes’s starting line-up. But West Ham face a gruelling schedule as they juggle domestic and European commitments in the months ahead. Their squad depth will be tested.

Vlasic appears ready to step up. With a bedding-in period behind him and finally off the mark with his first goal, the 24-year-old could prove a difference-maker as West Ham aim to finish the season as strongly as they have started it.
Nick Wright

Spurs’ European exit could be blessing in disguise

The general consensus was that Antonio Conte had wasted little time in transforming Tottenham, and at St Mary’s he extended his unbeaten start to his latest role to seven league games, becoming the first Spurs manager ever to achieve that feat.

But it was also wondered how Spurs would look in the Premier League away from home under the Italian given that a quirk of their recent spate of three postponed matches due to Covid cases had wiped out their last three road trips.

A total of 51 days separated this visit to the south coast with their last domestic jaunt on November 7 at Everton, and there was a sluggishness to their play as they deservedly fell behind to James Ward-Prowse’s third goal in as many games.

Tottenham only sparked into life after Southampton were reduced to 10 men. Harry Kane scored his 11th goal in as many games against Saints and he thought he had completed the turnaround only to be fractionally denied by VAR.

In all, Spurs had 22 attempts with three goals correctly chalked off but they lacked conviction as two points slipped away.

The vocal celebrations for Southampton fans at the final whistle told the story as they could reflect on four points from two games against Champions League contenders in the space of 48 hours.

When asked about his side’s failure to take advantage of their numerical advantage for the best part of an hour, Conte said: “For sure, it’s a missed opportunity and you have to try to exploit this situation to try to get three points.

“We knew very well to play Southampton at this stadium is not easy. At one point in the game, a draw would’ve been a positive for us but we felt the fatigue and our mind wasn’t very clear to do the best of the situations.”

Spurs could be starting to feel the pinch, and their elimination from the Europa Conference League after Uefa ruled they forfeited their final match against Rennes could yet prove a blessing in disguise.

Steven Bergwijn sustained a calf injury in the game against Crystal Palace, to go with Giovani Lo Celso missing out having done the same warming down having not featured on Boxing Day. It is an illustration of the high intensity Conte wants from his players at a time when games are unrelenting and muscular injuries are rife.

Conte knew he had to manage his players’ minutes, but with six more games coming up in January – three against Chelsea – he will need his entire squad available and firing to keep the momentum behind his transformative impact.
Ben Grounds 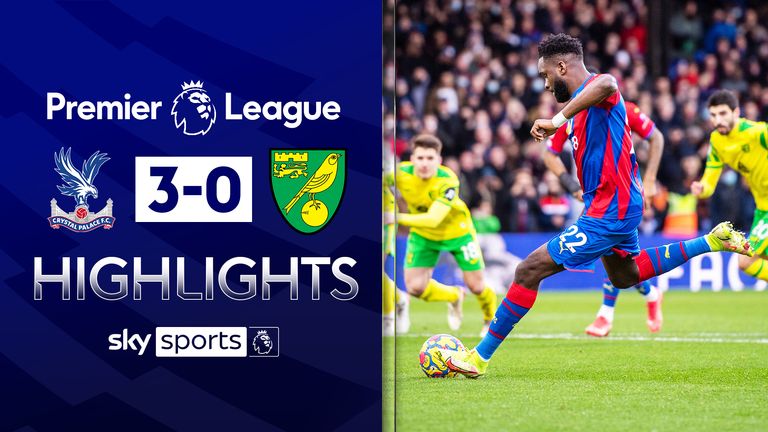 FREE TO WATCH: Highlights from Crystal Palace’s win over Norwich

There would have been a few nervous looks between Crystal Palace fans when Tuesday’s team news came out. They were already without talisman Wilfried Zaha to suspension, while manager Patrick Vieira was isolating due to Covid.

Then, Conor Gallagher was also left out of the matchday squad, although the reason remains unknown. Three of the keys to their success this season would not be in attendance with a 3-0 defeat at Tottenham fresh in the memory.

But perhaps their biggest tool this season has been Selhurst Park itself. It has always been a ground renowned for its atmosphere, with the Holmesdale End the epicentre.

And under Vieira, Crystal Palace have lost just once and scored 18 goals in their 10 Premier League home games this season (17 points), after losing five and scoring just nine times in the 10 before that (11 points).

But perhaps one of the most pleasing things about the victory against Norwich would have been completing it without their star players, particularly Zaha. Crystal Palace had won just three times in their previous 24 games without the forward. Now, they can notch that up to four.

Admittedly, Crystal Palace did not play their best game of the season, but did punish a sloppy Norwich with their three first-half shots on target. It was a game they would have expected to win and they saw out the game with discipline in the second half.

It sees Crystal Palace in the top half of the table going into 2022. They are just five points off Manchester United in seventh and, say it quietly, could they push for a Europa Conference League spot next season?

It would be some achievement if they did, but for now, there are plenty of positives to take heading into 2022.
Charlotte Marsh 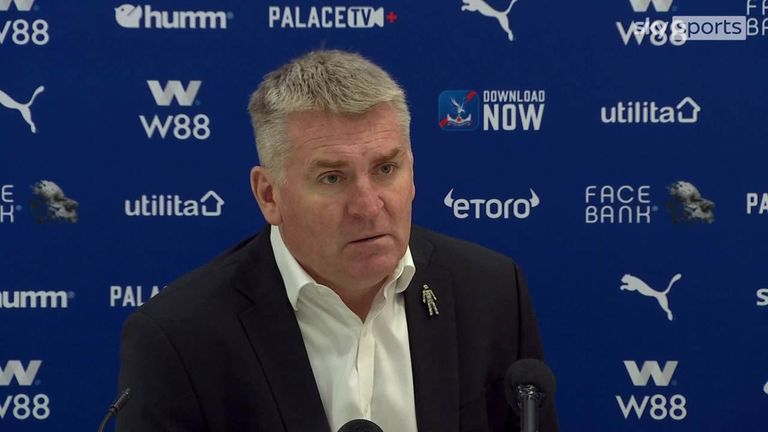 Dean Smith says Norwich City’s 3-0 defeat to Crystal Palace ‘hurts’ but stressed his squad has been ‘decimated’ during recent weeks, through injury and Covid

When he arrived at Norwich, Dean Smith said he was pleased with the shape of his squad as they faced an uphill battle to avoid Premier League relegation.

However, in the last few weeks, he has seen his side taken down to the bare bones with injuries and illness. On Monday alone, Todd Cantwell, Teemu Pukki and Max Aarons became unavailable. Dimitris Giannoulis came off at half-time with a knock, while captain Grant Hanley and No 1 goalkeeper Tim Krul also sidelined.

The list keeps on going and Smith was forced into six changes for the trip to Selhurst Park. No one in his matchday 18 had scored a Premier League goal this season and in December, they have lost five successive games without scoring a goal.

And yet, Norwich did test their opponents, particularly in the second half. But a string of errors in the first half sealed their fate and quite simply, they did not have the quality to find a way back into the game.

“What we had when I first came in, I was quietly optimistic, but it’s been decimated at the moment and that’s where we were today… We’re lacking a lot of leaders in our group who unfortunately at the moment are injured or ill,” Smith said after the game.

“I said to the players at half-time, you need to go out and show some character and pride in the second half. I didn’t think the first half was a 3-0 first half, it was just the manner of goals that were disappointing and unfortunately, the result is the only thing people will talk about.”

Their extensive list of absentees could not come at a worse time. Christmas is always the busiest time of the season – including two games in 48 hours, a schedule about which Smith has been a public critic of – and they find themselves three points adrift of safety at the bottom of the table, having played the most games of the teams around them.

With each passing game, it is looking a bigger and bigger task for Norwich to stay in the Premier League.
Charlotte Marsh