Ja Morant inspired the Memphis Grizzlies to an impressive win over the Brooklyn Nets, the Chicago Bulls extended their win streak to eight games and the Golden State Warriors rallied past the Miami Heat on a quiet night for Stephen Curry. Highlights of the Memphis Grizzlies’ visit to the Brooklyn Nets in Week 12 of the NBA.

Ja Morant produced a dominant 36-point performance as visiting Memphis survived a shaky fourth quarter in a 118-104 win over Brooklyn.

After being named Western Conference player of the week, Morant became the first player in franchise history to score at least 30 points in four straight games, breaking the team record he shared with Bryant Reeves, Pau Gasol and Marc Gasol.

Morant scored 18 points in the third quarter when the Grizzlies outscored the Nets 40-26 and opened a 96-73 lead. Desmond Bane added 29 as the Grizzlies won its fifth straight and handed Brooklyn their season-high third straight loss.

Anfernee Simons scored a career-high 43 points and matched his career best of nine 3-pointers to help the Portland Trail Blazers post a 136-131 shootout win over the Atlanta Hawks.

Atlanta star Trae Young scored a career-best 56 points and also had 14 assists but couldn’t prevent the Hawks from losing for the 10th time in 14 games.

Norman Powell scored 26 points and Nassir Little added 22 as Portland snapped a four-game slide and won for just the fourth time in the past 18 games. Jusuf Nurkic had 21 points and 12 rebounds for the Trail Blazers after missing three games due to being in the COVID-19 protocol.

Clint Capela scored 22 points on 10-of-10 shooting and added 11 rebounds for the Hawks. Kevin Huerter scored 18 points and played 37 minutes in his return after missing six games due to COVID-19 protocol.

Jordan Poole and Gary Payton II combined for 46 points and hit key baskets down the stretch as Golden State overcame an off night from Stephen Curry to outlast visiting Miami in San Francisco.

Curry shot just one-for-10 on 3-pointers and three-for-17 overall in a season-worst, nine-point performance, but five teammates, led by Poole’s 32 off the bench, scored in double figures to assure Golden State’s second straight win and fifth in its last six games.

Despite losing Jimmy Butler to a sprained right ankle in the third quarter and playing their second game in two days, the Heat remained competitive down to the final minute thanks in large part to 17 3-pointers, including four each from Tyler Herro and Kyle Guy. Butler finished with 22 points. Highlights of the Houston Rockets’ trip to the Philadelphia 76ers in Week 12 of the NBA.

Joel Embiid had 31 points, 15 rebounds and 10 assists to lift Philadelphia to a victory at home over Houston.

It was the third career triple-double for Embiid. Furkan Korkmaz added 24 points and a career-high 11 rebounds for the 76ers, who won their fourth in a row.

The 76ers played without Tyrese Maxey, Matisse Thybulle and head coach Doc Rivers as they were held out in the league’s health and safety protocol. Highlights of the Charlotte Hornets’ clash with the Washington Wizards in Week 12 of the NBA.

Bradley Beal and Kyle Kuzma made big plays down the stretch as Washington pulled out a victory against Charlotte.

Washington came back from a double-digit deficit in the second half, scoring nine consecutive points to grab a seven-point lead in the final minute.

Kuzma had 36 points and 14 rebounds and Beal posted 35 points, while Daniel Gafford supplied 15 points and 11 rebounds.

Gordon Hayward’s 27 points, Terry Rozier’s 25 and Miles Bridges’ 23 were tops for the Hornets. 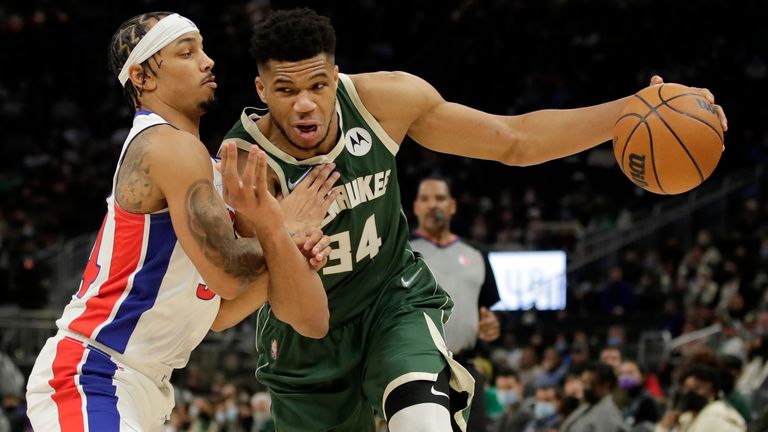 Highlights of the Detroit Pistons’ trip to the Milwaukee Bucks in Week 12 of the NBA.

Saddiq Bey set a career high with 34 points as Detroit defeated host Milwaukee to win back-to-back games for the first time this season.

Bey also notched eight rebounds and four assists with 12-of-22 shooting and eight 3-pointers to lead the Pistons to their third road win of the 2021-22 campaign. Bey now has eclipsed the 20-point mark in eight of his last nine games. Josh Jackson added 24 points off the bench, and Cade Cunningham had 19 along with seven assists.

Giannis Antetokounmpo led the Bucks with 31 points, 10 rebounds and seven assists on 11-of-21 shooting. Jrue Holiday had 29 points, and Bobby Portis contributed 12 to go with his 14 rebounds. Khris Middleton chipped in 10 points after missing the last game due to personal reasons. Highlights of the Utah Jazz’s trip to the New Orleans Pelicans in Week 12 of the NBA.

Donovan Mitchell scored 15 of his 29 points in the fourth quarter as Utah held off New Orleans.

Mike Conley added 22 points, Bojan Bogdanovic scored 21, Jordan Clarkson had 14 and Rudy Gobert had 10 points and 17 rebounds for the Jazz.

Jonas Valanciunas returned from a one-game absence while he was in the league’s health and safety protocol to lead the Pelicans with 25 points. Josh Hart added 15, Nickeil Alexander-Walker scored 13, and Devonte’ Graham and Herbert Jones had 11 each. Highlights of the Orlando Magic’s clash Chicago Bulls in Week 12 of the NBA.

Chicago led by as many as nine in the second half but was unable to fully pull away, as Franz Wagner led the Magic with 22 points and Wendell Carter Jr. notched a double-double of 21 points and 10 rebounds.

Jalen Brunson scored 13 points and Maxi Kleber and Dorian Finney-Smith had 10 points apiece for the Mavericks, who have won three straight.

Nikola Jokic had 27 points and 16 rebounds, Aaron Gordon scored 15 points and Will Barton added 12 for Denver. The Nuggets were still without head coach Michael Malone, assistant coach David Adelman and forwards Jeff Green and Zeke Nnaji due to health and safety protocol.

Anthony Edwards scored 28 points and Jaden McDaniels added 18 as Minnesota ended a three-game losing streak by cruising to a win over Los Angeles on the road.

Taurean Prince had 17 points as the Timberwolves won on the second night of a back-to-back after losing to the Los Angeles Lakers 108-103 on Sunday.

Minnesota entered having lost five of their last six games. Serge Ibaka had 17 points for the Clippers, while Justise Winslow added 15 as Los Angeles lost in its return home after winning two of three on the road, including a 120-116 victory at Brooklyn on Saturday.