Jurgen Klopp has admitted Liverpool did not expect to be in contention to win the quadruple this season, but pointed out his side have only lifted one trophy amid talk of a historic campaign.

Liverpool take on Merseyside rivals Everton on Sunday – live on Sky Sports – amid a tight title race with Manchester City, who they trail by just one point in the Premier League.

Klopp’s side also face a Champions League semi-final against Villarreal and an FA Cup final with Chelsea as they bid to add to the Carabao Cup they won against the Blues in February.

If Liverpool win all three remaining competitions this season they will become the first English side to win the quadruple, but Klopp said: “It’s a situation we didn’t expect to be in.

“We love being in this situation. It’s incredibly tough – we play pretty much all the time. You cannot plan that you are still in everything.

“But we know there’s nothing we have achieved so far, or not a lot. We won one competition, that’s great, but there are three others to go.

“The boys are in a good moment but we have to prove it again on Sunday. We are looking forward to everything that’s coming up.”

FREE TO WATCH: Highlights from Liverpool’s win over Manchester United in the Premier League

Liverpool’s potential achievements are even more remarkable given their struggles during the previous campaign, when injuries to the likes of Virgil van Dijk, Joel Matip and Thiago Alcantara contributed to a season without silverware.

Klopp’s side even came close to missing out on the top four before a five-game winning run – featuring a late win at West Brom thanks to goalkeeper Alisson’s header – after a home draw with Newcastle saw them clinch third place.

While Klopp admitted he did not expect his side to bounce back so convincingly this season, he said he remained confident they would respond once their injury crisis was averted.

“I didn’t expect us to win the Carabao Cup, be in an FA Cup final, semi-finals of the Champions League and one point behind the [Premier League] leader,” said Klopp. “I didn’t think that to be honest, but I knew we would be better.

“What the boys did last year was really special in such a difficult situation. To qualify for the Champions League was massive.

“There were a lot of moments before the Newcastle game where I thought, ‘that’s difficult – we will not make that this year’. We had moments where we thought, ‘OK, hopefully we don’t have to play Conference League’.

“Then you have to readjust the pre-season planning and all those things. I remember these thoughts, and then we won five games in a spectacular manner – West Brom, Ali header. Outstanding, I loved each bit of it.

“But saying that, we knew when the other three boys were back we would be stronger. We had an OK first part of the season, but it was not that people were over the moon when you are 14 points behind the leader. But again, what the boys made of that was pretty special.”

Klopp: Everton game must not go ‘over the top’

Two of those long-term injuries that handicapped Liverpool’s previous season were sustained in their 2-2 draw at Everton in October 2020, and Klopp called for Sunday’s meeting between the sides not to “over the top” with both teams facing crucial matches following the derby.

Van Dijk and Thiago both suffered serious knee injuries at Goodison Park last season, and with the first leg of their Champions League semi-final with Villarreal on Wednesday, Klopp said: “I love intensity in football, I love physicality in football, but just within the rule book, just make sure we all stick to that.

“Don’t go over the top, like in the ‘good old times’. We have suffered from these situations. I just want to have a very intense, physical and aggressive football game, but not more, because we play games after the derby as well.” 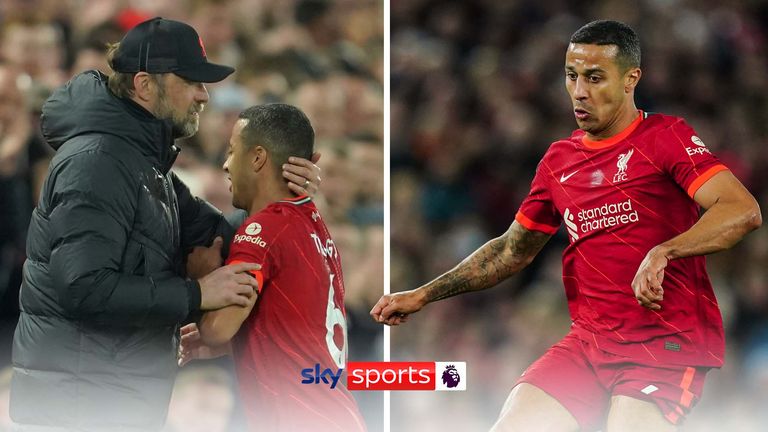 Thiago’s injury – caused by a tackle from Richarlison that earned the Everton forward a red card – meant the Spain international struggled to hit the ground running during his first season in English football, and even led to questions over whether he suited Liverpool’s high-intensity style.

But the 31-year-old has put those questions to bed this season, none more so than during his stunning performance in the 4-0 thrashing of Manchester United on Tuesday.

Klopp gave short shrift to the suggestion that doubts had emerged over Thiago’s ability to adapt to life at Liverpool, saying: “People were questioning if he suits our football? Thank God these people don’t make decisions!

“It’s all about being fit, staying fit and getting used to the differences from the former club, then you can go from there.

“Thiago only had one problem – he was injured. It started with the Everton game. That didn’t help but it was never a question of whether he would suit us. We only signed him because we knew he would help us.”