Bronte Law finished on nine under and a shot clear of Georgia Hall at the Centurion Club; Linn Grant finishes third ahead of Charley Hull, while Team Garcia won the team competition after defeating Team Wikstrom in a play-off 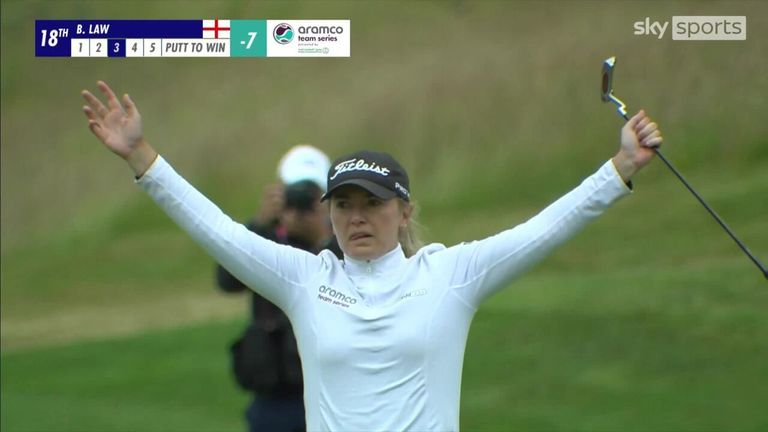 Bronte Law produced an incredible finish to snatch an unlikely victory on home soil at the latest Aramco Team Series event in England.

Law went into the final round two off the pace and fell further behind with a double-bogey at the par-five 13th, only to bounce back with successive birdies from the 15th and a brilliant 50-foot eagle at the par-five last.

Playing the last four holes in four under saw Law close a final-round 71 in the 54-hole event at the Centurion Club, seeing her end the week on nine under and a shot clear of compatriot Georgia Hall.

“I had to stay mentally strong and had to set my head straight before I got on to the next tee box,” Law said about the double-bogey. “I did that and I hit the best shot I could’ve hit on that hole.

“I just knew I had to battle. It’s never over until it’s over and I guess it showed at the end there.”

Grant – who became the first female to win a DP World Tour event on Sunday – birdied her opening two holes and then bogeyed four of her next six, only for the Swede to birdie six of her last seven holes to card a four-under 69.

Charley Hull finished in fourth ahead of Australian Whitney Hillier after a closing 69, while overnight leader Hayley Davis carded two double-bogeys on her back nine and dropped to tied-ninth after a seven-over 80.

In team competition, Team Garcia – led by Nicole Garcia – defeated Team Wikstrom in a play-off after both teams finished on 27 under.

The next Ladies European Tour event is the Tipsport Czech Ladies Open, beginning on Friday, while the Aramco Team Series continues in Sotogrande, Spain from August 18-20.