Winger Lewis Murphy grabbed two tries for Wakefield as they defeated Castleford for the first time since 2015; the result ends a run of 17 games without a win against their derby rivals and lifts them out of the Betfred Super League relegation zone.

Tries from the 20-year-old, Liam Hood and Matty Ashurst put Trinity firmly in control at the break as they led 18-0, with Castleford’s best opportunity seeing Bureta Faraimo have a possible try ruled out by the video referee.

Winger Murphy then went the length of the field nine minutes into the second half for a spectacular solo try to set his side on course for a first win over the Tigers since 2015, with David Fifita’s score and six goals from Mason Lino sealing the victory.

As well as bringing to an end a run of 17 games without tasting victory against their West Yorkshire rivals, the result lifted Wakefield out of the relegation zone and two points clear of Toulouse Olympique, who were beaten at home to Hull FC earlier in the night.

Castleford, who had won four of their previous five matches, had the chance to move to within a point of fourth-placed Huddersfield Giants but this lacklustre performance casts fresh doubt over their play-off credentials.

Trinity went into the contest on the back of a five-match losing run but they looked up for the fight from the start and their energy and enthusiasm was encapsulated by hooker Hood when he went from dummy half on the last tackle to open the scoring with an opportunist try. 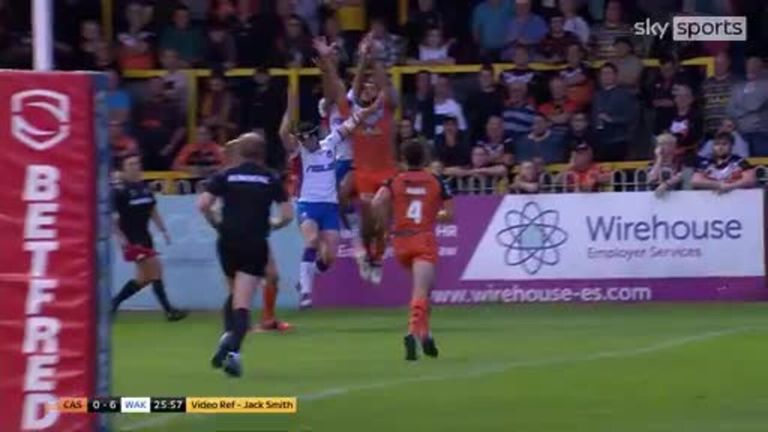 Lewis Murphy has scored Wakefield Trinity’s second try against the Castleford Tigers in the Super League.

Lewis Murphy has scored Wakefield Trinity’s second try against the Castleford Tigers in the Super League.

Without Gareth O’Brien and Alex Mellor from the team that won so emphatically at Hull FC, Jason Qareqare came onto the bench for Castleford after being recalled from a loan spell with Whitehaven.

Wakefield brought in winger Lee Kershaw for his first appearance of the season – ending a 10-month lay-off with a knee injury – in place of Jorge Taufua while forward Yusuf Aydin was back in the line-up after playing on loan for Leeds Rhinos a week ago.

As Trinity went on to dominate the first half, full-back Jamie Shaul looked to have scored his first try for the club only to have it ruled out by video referee Jack Smith, but Murphy was not denied after 26 minutes when he leapt above Bureta Faraimo to touch down skipper Jacob Miller’s high kick.

Half-back Lino’s touchline conversion made it 12-0 and the Tigers needed a last-ditch tackle from full-back Jake Mamo to prevent the ever-dangerous Murphy adding a second try.

The home side looked to have pulled a try back when Faraimo squeezed over at the corner but slow-motion replays indicated a foot in touch and Trinity made the most of the let-off as Miller put second row Ashurst over for their third try two minutes before the break, when they led 18-0.

Radford’s men showed signs of improvement in the second half and were camped inside the Trinity 20-metre area, threatening a fightback when Miller collected Danny Richardson’s grubber kick and released Murphy on an 80-metre run for his second try. 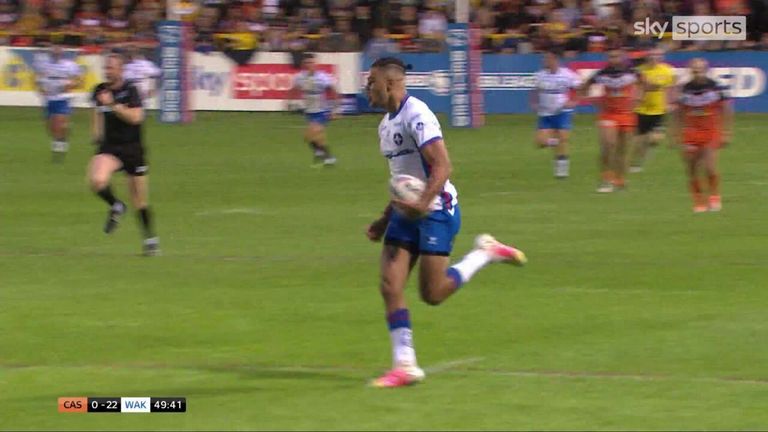 Interchange prop Fifita then sent the vociferous away following among the 6,796 crowd into raptures with a barnstorming run that brought Wakefield’s fifth try and Lino kicked his fifth goal from as many attempts to extend the lead to 30-0.

Richardson broke his side’s duck on the hour, profiting from Lino’s fumble behind his own line, and added the conversion.

But it was little consolation for a Tigers side beaten in every department by their spirited visitors, who rounded off the scoring with a Lino penalty five minutes from the end.

“We fell well short. I was really disappointed with our start and defensively, our middles in particular unfortunately set a precedent for the shambles we looked like in the second half.”

“It’s been a long time coming – it feels good. It’s a shame we’re in the situation we are and the job’s not over yet, but tonight feels good.”

Castleford now face the trip to Super League leaders St Helens on Sunday, August 7 (1pm kick-off). Wakefield are back at home to Catalans Dragons on the same day (3pm).