Newcastle’s thrilling performance was only good enough for a point as a poor Manchester United scraped a 1-1 draw at St James’ Park.

Allan Saint-Maximin’s fine first-half goal had given Newcastle the lead in the seventh minute and they were well worth that advantage for over an hour as Ralf Rangnick’s side struggled.

But substitute Edinson Cavani scored a scarcely-deserved equaliser and it required some typical heroics from David de Gea to deny Miguel Almiron a late Newcastle winner.

Man of the match: Joelinton

While Manchester United escaped with a draw, the first dropped points of the Rangnick regime, Eddie Howe was left frustrated, a night of promise and hope ending with Saint-Maximin and Callum Wilson injured.

The result was not enough to move Manchester United up the table – they stay seventh – while Newcastle remain one off the bottom in 19th, still two points from safety.

How the game unfolded

Amid an electric atmosphere at St James’ Park, Manchester United look hurried from the outset with their experienced centre-back pairing appearing particularly ruffled.

Harry Maguire’s error almost let in Ryan Fraser early on before Raphael Varane, in his first start since October, was punished after being dispossessed in the build-up to the opener.

Saint-Maximin found himself running at the Manchester United defence, cutting inside Maguire and, on the stretch, somehow poking the ball expertly into the corner of the net.

The tempo seemed too much for the away side at that stage, the rejuvenated Joelinton coming close to doubling the advantage with a shot that had De Gea scrambling.

Rangnick’s team had plenty of possession but the chances continued to come for Newcastle with Wilson even putting the ball into the net only to be adjudged offside.

The closest Manchester United came in the first half was through Mason Greenwood from Bruno Fernandes’ clever free-kick but Cristiano Ronaldo was offside and interfering anyway.

It was an alarming 45 minutes for the visitors in what Gary Neville had billed beforehand as a new start but soon found himself deriding the players as “a bunch of whingebags”. 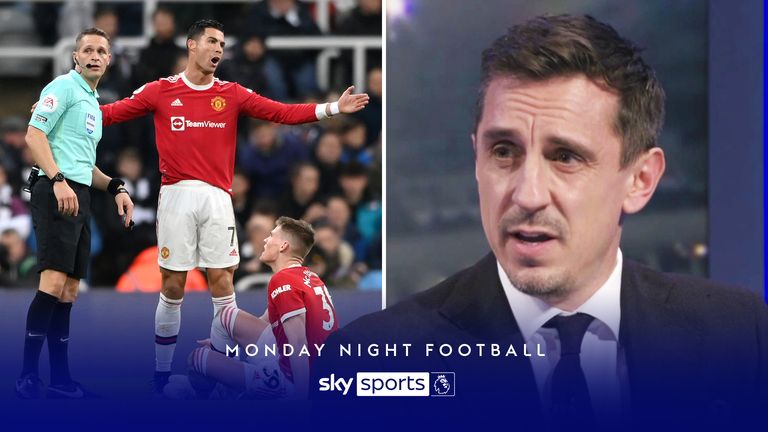 Newcastle made no fewer than six changes from the 4-0 defeat at Man City, and named only eight substitutes out of a possible nine. Jacob Murphy and Miguel Almiron dropped to the bench, while Ciaran Clark, Matt Ritchie, Joe Willock and Isaac Hayden were out. Javier Manquillo, Fabian Schar, Emil Krafth, Jonjo Shelvey, Sean Longstaff and Allan Saint-Maximin came in.

Manchester United, who had not played since December 11, made two changes from the 1-0 win at Norwich. Raphael Varane played for the first time since late October, returning from a hamstring injury to replace the absent Victor Lindelof. Further up the pitch, Mason Greenwood came in for Jadon Sancho, who was benched.

Jadon Sancho and Cavani replaced Greenwood and Fred at the interval but Saint-Maximin should have had his second from close range only to be denied by De Gea.

Any better contact on Emil Krafth’s low cross from the right would have been too much for the Manchester United goalkeeper but the squandered opportunity left the door ajar.

Rangnick’s team just looked unable to push through it. A lunge from Ronaldo that might have earned more than a booking. A miskick from Marcus Rashford. A dismal cross from Sancho.

This was ‘Bizarro World’, where Joelinton looked the most complete player on the pitch. He set up Saint-Maximin again, forcing another good save from De Gea as the fans roared.

But with the game wide open, there was always that chance of an equaliser and Cavani found it – scoring from the second attempt after Diogo Dalot’s right-wing cross.

The Uruguayan can appear like a magnet for the ball in the box and almost conjured a second goal soon after as Newcastle sat back, doubt creeping into their performance.

A promising night got trickier when Saint-Maximin went off injured, joining Wilson who had hobbled off earlier, sapping belief in a result – and perhaps Premier League survival.

But Newcastle refused to yield and came painfully close to a winner in the 88th minute when Jacob Murphy hit the post before Almiron drew a stunning save from De Gea.

Martin Dubravka almost blew it late on when dropping a high ball into the path of Sancho but a Manchester United win was not deserved. Both had to settle for an eventful draw. Newcastle boss Eddie Howe: “We’re disappointed, we felt we deserved to win. I don’t think we deserved to concede. How De Gea saved that shot from Almiron, I don’t know. But hopefully we’ve seen the beginning of a new team. But for a bit more luck, we could have won the game.”

Man Utd boss Ralf Rangnick: “I did not like it at all. We were trying to get better at controlling games. Today we did not control the game, apart from very few moments, at all. It was all about energy, about physicality, and who wins the second balls. In all those areas we were not at our best today. In the end, we got a point, that is the good thing. But the overall performance has to get better.” 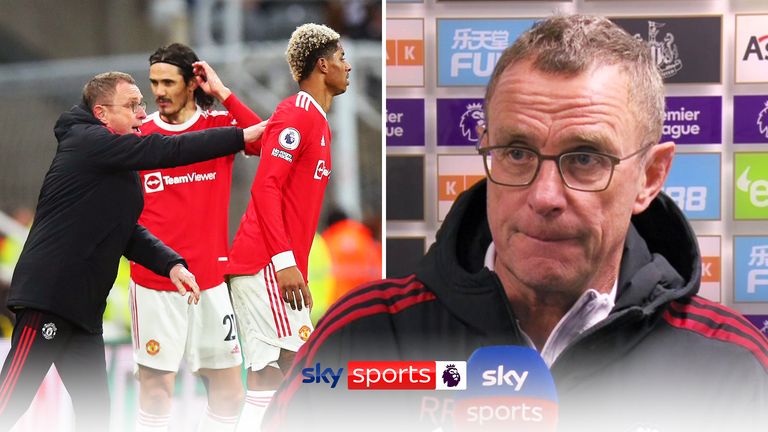 Man of the match: Joelinton

Joelinton has been a revelation in midfield and this performance showcased his defensive qualities. He won possession of the ball 11 times, more than anyone else on the pitch, making four interceptions, also the most of anyone in the game. He was involved in everything – having more touches and completing more passes than any Newcastle player.

“He was brilliant,” Jamie Carragher told Monday Night Football. “That was an outstanding midfield performance by any standard. His running with the ball, he wins the ball back. The power he showed. He has taken some criticism. Let’s not sugar coat it, he was really poor as a centre-forward. Eddie Howe has put him in a midfield position and he has looked Newcastle’s best player. It was a superb performance. Rightly so, he gets man of the match.” Sean Longstaff was eager to defend his team-mate’s reputation as an under-performer when speaking to Sky Sports after the game – “the disrespect he gets is a disgrace” – but there is no denying that the change of position has brought out previously unseen qualities.

“Initially, we thought we would play him as a No 10,” Eddie Howe told Monday Night Football. “But we went to 10 men against Norwich at home and we reshuffled to play him as an 8 and I thought that night he was brilliant defensively. His tactical knowledge of the position was excellent.

“The question mark against any attacking player moving into midfield is whether he can defend but he has been absolutely brilliant defensively for us. The work-rate and the amount of ground that he covers is incredible really. I cannot praise him enough.”

Manchester United now host Burnley on December 30 at 8.15pm in the Premier League, while Newcastle are at Everton at 7.30pm on the same day. You can watch free match highlights from both games shortly after full-time on skysports.com and the Sky Sports App.