With nine weeks of NFL action in the books, we’re officially at the halfway point of the 2021 season. So, with that in mind, Neil Reynolds gives out some awards at the midseason mark, picking out his league MVP, coach of the year candidates and Super Bowl picks so far…

“The MVP race is a lot like the Super Bowl race this season, it’s wide open!

“If you told me Matthew Stafford, Tom Brady, Kyler Murray were going to win that award, I wouldn’t be surprised. But, I’ve gone with Lamar Jackson right now, because of the impact he has on his team. Brian Baldinger sings the praises of Baltimore Ravens quarterback Lamar Jackson on Inside The Huddle, hailing him as the NFL’s ‘most talented player’

Brian Baldinger sings the praises of Baltimore Ravens quarterback Lamar Jackson on Inside The Huddle, hailing him as the NFL’s ‘most talented player’

“He is still not the perfect passer, but he has definitely developed as a quarterback – he is taking more shots downfield – and the passing game is now more of a factor for the Ravens. Plus, he is on pace for 1,200 rushing yards this season.

“Within league circles, he is considered a bit of a Madden (video game) cheat code. He just does stuff that you shouldn’t be able to do.

“Baltimore need him so much to be able to win games of football. His value is immense to that team.”

Defensive Player of the Year

“Another tough one, but I’m going to go with Myles Garrett. Week in, week out, he gets to the quarterback.

“He has 12 sacks already! That’s a record pace and we’re only at the halfway point of the season. He is dynamic, athletic, a true game-changer.

“He shows up every week for Cleveland, even if the team overall has a slightly off day on defense.

“Another pass rusher, T.J. Watt of the Pittsburgh Steelers will be in the mix as well – he also has great numbers when it comes to sacks (11.5) – and you can’t ignore cornerback Trevon Diggs and what he has done, his interception streak for the Dallas Cowboys. But I’m giving the edge to Garrett.” Rookie of the Year

“Even though he has slowed down in the past couple of weeks, Bengals receiver Ja’Marr Chase has been so fun to watch.

“I think this guy is going to be one of the stars of the NFL for many years to come. He will walk away with the offensive rookie prize, while on defense it is just as easy a choice…

“Micah Parsons, of the Dallas Cowboys. They have played him at linebacker and on the defensive line – he can do it all.

“He is not only the best rookie defender in the league, he is one of the best defenders, period!” 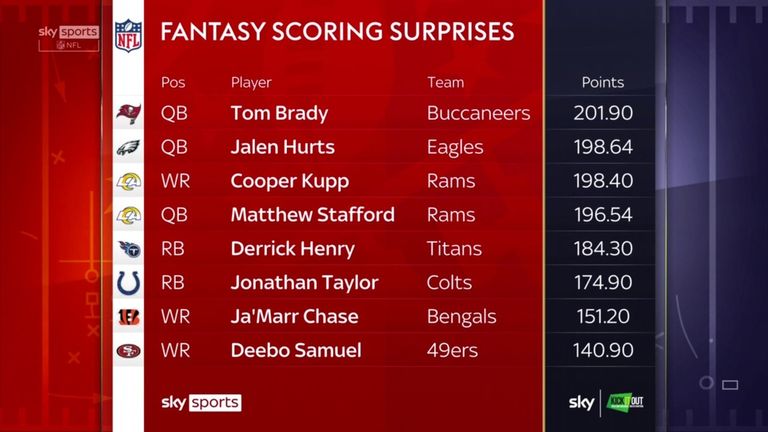 League MVP? Rookie of the Year? The NFL Overtime team take stock at the halfway point of the 2021 Fantasy Football season

League MVP? Rookie of the Year? The NFL Overtime team take stock at the halfway point of the 2021 Fantasy Football season

“It has to be the Arizona Cardinals. I keep waiting for the moment when they might slip up, but they continue to string together quality wins – they’ve beaten the Los Angeles Rams, the Browns.

“And, even this past week, they won without Murray, DeAndre Hopkins, A.J. Green, J.J. Watt, beating the San Francisco 49ers by 14 points on the road. They look like a complete team.

“Also, an honourable mention for the New England Patriots. I did not expect this team to be positioning themselves to make a run at the AFC East. Head coach Bill Belichick helps them out so much, rookie quarterback Mac Jones is looking better every week, the run game is strong, as is the defense.

“In a negative sense, the Washington Football Team have been a real disappointment this season. Their defense was so dominant last year – one of the best in the NFL – and you expect them to kick on.

“I’ve asked the question in the Sky Sports studio on Sunday nights quite a lot this year; ‘what is wrong with the Washington defense?’ No one can quite put their finger on it, a defense as talented as that. It’s one of the mysteries of the season.”

Coach of the Year

“I want to give a definite honourable mention to Kliff Kingsbury, as no one expected the Cardinals to be 8-1 at this stage of the season.

“But I’m going to give the nod to Mike Vrabel at Tennessee, for what he has done in leading his team on their current win streak – beating four-straight playoff teams in the Buffalo Bills, Kansas City Chiefs, Indianapolis Colts and Rams. The Ringer’s Nora Princiotti joins NFL Overtime and praises the much-improved Tennessee Titans defense, suggesting teams will want to avoid facing them in the playoffs

The Ringer’s Nora Princiotti joins NFL Overtime and praises the much-improved Tennessee Titans defense, suggesting teams will want to avoid facing them in the playoffs

“He has built a team in his image. They are resilient, tough, clutch – they’ve won seven of their last eight overtime games, including two of three this year. He deserves a ton of credit.

“It’s still a major loss to this team not to have star running back Derrick Henry for the rest of the regular season due to injury. If he keeps his team in the playoff picture without Henry, that’s pretty much enough to win this award.”

On the hot seat

“This is a surprise to me, given his status coming into this season, but Brian Flores could be in trouble in Miami.

“It’s incredible to think that they may have to go through another reboot at head coach and quarterback – how many times can you repeat this cycle? – but, given they won 10 games last season, it has been very disappointing so far this year. They were supposed to kick on and challenge for the playoffs.

“And where specifically things reflect badly on Flores is, he keeps chopping and changing players, coordinators, in order to try and get things right. But what is your plan, your model?

“The one on the warmest seat right now is Flores, though Kyle Shanahan with the San Francisco 49ers is maybe an outside shout. They’ve been a disappointment this year and look to be in real trouble.

“All we hear is that the guy is a play-calling genius, but outside of the 2019 season when the 49ers went to the Super Bowl, it has been losing record after losing record in San Francisco.”

“I would say that it was actually easier to make my Super Bowl prediction in the offseason, before a snap had even been taken in the NFL, than it is now at the halfway point of the season! It is so wide open this year.

“I picked the Bills to win the whole thing in the summer, and I’m going to stay brave and stick with them as my pick from the AFC – though I would like to see them run the ball a little bit more!

“I initially had the Tampa Bay Buccaneers making it from the NFC, but I’m now going to say that the Rams figure it out with all of the talent they have at their disposal on that roster. 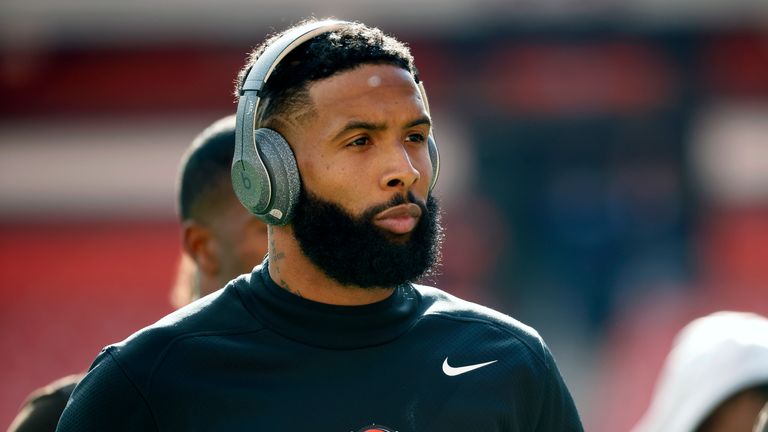 “Honestly though, you’d have as much chance at picking the Super Bowl finalists by throwing darts at a dartboard. There are 11 teams with a winning record in the AFC alone – ridiculous!

“I think it’s going to be the most wide-open, exciting race to the Super Bowl we’ve ever seen.”