Police are investigating an incident that saw a non-League footballer released by his club after he threw punches in the direction of a referee and opposition players following a red card.

Epsom & Ewell, who play in the Southern Combination League, were 3-0 down to Dorking Wanderers Reserves on Monday when the player was dismissed in the second half.

A video shows the player appear to push towards an opponent standing next to the referee after receiving the card before punching other players while pursuing the official.

Surrey and Sussex Police Football Unit have confirmed they will be launching an investigation into the incident.

PC Darren Balkham tweeted: “Surrey and Sussex Police Football Unit are aware of the incident which occurred during the Dorking Wanderers Reserves v Epsom and Ewell match today. An investigation will take place around the events and the incident in question.”

The match was abandoned in the 69th minute with Epsom & Ewell promptly releasing a statement afterwards apologising for the scenes and revealing the player in question had been released by the club.

“Epsom & Ewell Football Club would like to put on record our apologies to today’s officials and players of Dorking,” the statement read.

“We will not tolerate this behaviour at our club and are mortified by the scenes in today’s match.

“The player in question has been released by the club with immediate effect.

“We would like to thank Dorking for their hospitality today and again apologise for [Monday’s] match. This sort of action holds no place in football or society.”

SCFL chairman Steve Nealgrove told Sky Sports News he was “gobsmacked” watching the footage and called on the Football Association to hand out lifetime bans for those found guilty of attacking match officials. 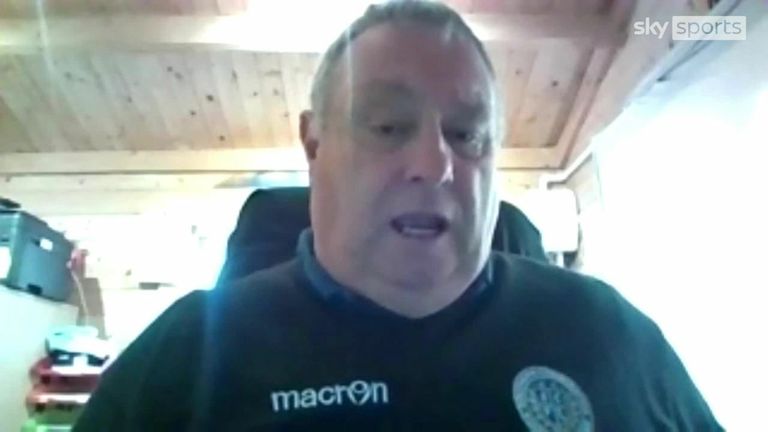 Steve Nealgrove, the chairman of the Southern Combination League has condemned the actions of one of Epsom and Ewell’s players on other players and referee during their match against Dorking Wanderers’ reserves

He said: “I’m quite gobsmacked really, I’ve seen as much as everyone else on social media, I know there is going to be more video evidence available that is going to be coming out at some point because Dorking Wanderers video their games, but with regards to the actual incident I am just still stunned a little bit now.

“I think somebody feels it’s ok to do what they did, or use a game of football as an excuse to do what they did and obviously reading the comments throughout social media, a lot of people feel exactly how I feel as regards to the punishment as we try to stop this ‘disease’, as I would call it, in our game at the various levels that we play.

“That’s not to say that it’s out of control because I don’t think it is but one incident is one incident too many.”

He added: “I do feel personally that the FA have an opportunity now to start to deal with these incidents and as I have already gone on public record and said, players will get a sine die life ban but, after a period of say five years, they will be given the opportunity to appeal that and potentially return to the game.

“Personally, if you get a sine die, particularly for attempting to strike or strike a match official you shouldn’t be allowed back in the game.

“We need to make stand and need to deliver a message to the players – it doesn’t do our national game any good, it’s not great publicity and not great for youngsters to see it on social media and individuals that behave like this are managing potentially adult clubs and may potentially be involved in kids football as well and what sort of message does that send out?”