Gerwyn Price stays on course to defend his world title but only after coming through a seven-set, sudden-death-leg classic, while his Welsh World Cup-winning team-mate Jonny Clayton breezes into the last 16 for the first time where he will play Michael Smith

Price, the defending champion and world No 1, edged out Kim Huybrechts in a sudden-death leg to set up a meeting with Van Duijvenbode, who battled back from three sets down to win a nail-biter of his own.

Jonny Clayton crushed the hopes of Germany’s Gabriel Clemens with a blizzard of blistering arrows in a comprehensive win.

In the race to four, Price made a breathtaking start following a 12-day break after his opening-night win against Ritchie Edhouse, landing a 109 before clearing up 58 for a whitewash first set in which he averaged 102.48. 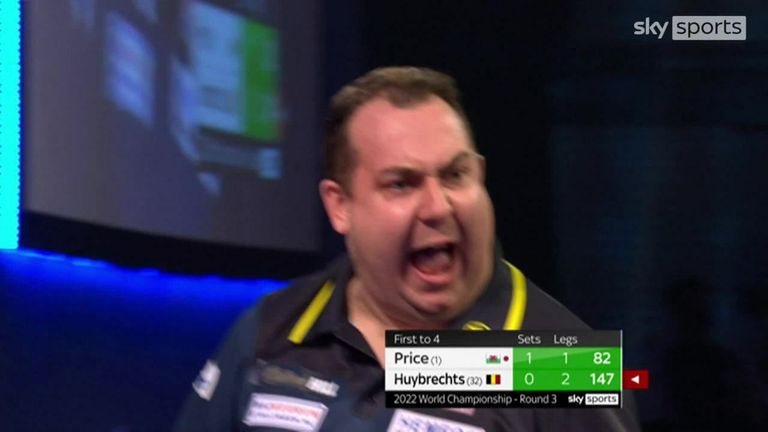 Antwerp ace Huybrechts came out for the second set in whirlwind fashion, winning it thanks to an 11-dart break and a magical 147 checkout. In a bruising battle, the Belgian started to believe after landing a superb ‘Shanghai’ 120 finish to snatch the third set from under the nose of Price.

But the Welshman quickly levelled it up at 2-2 in 43 darts – including a spectacular 130 checkout in the third leg. 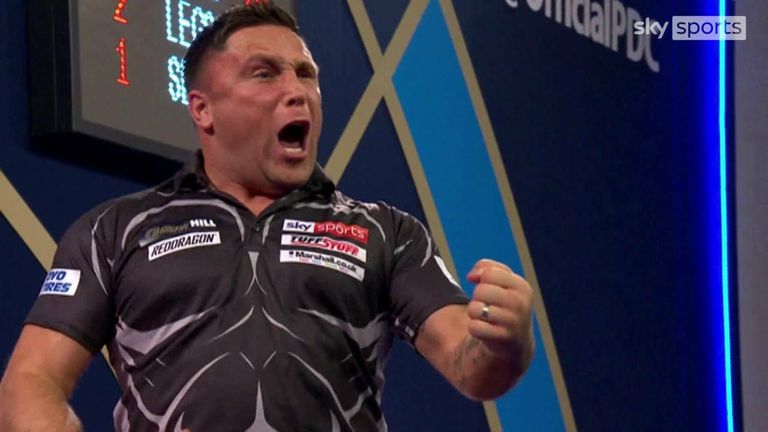 Price nailed a 112 and a 120 en route to winning the fifth set without reply, but despite hitting a second 120 in the next, it was ‘The Hurricane’ who sent it into a deciding set with a clinical 70 finish.

Huybrechts somehow clawed his way back from two legs down to take the match into a tie-break situation.

After Price picked out double five to move 3-2 ahead, the two players exchanged words in a heated exchange on stage with referee Kirk Bevins having to speak with them. 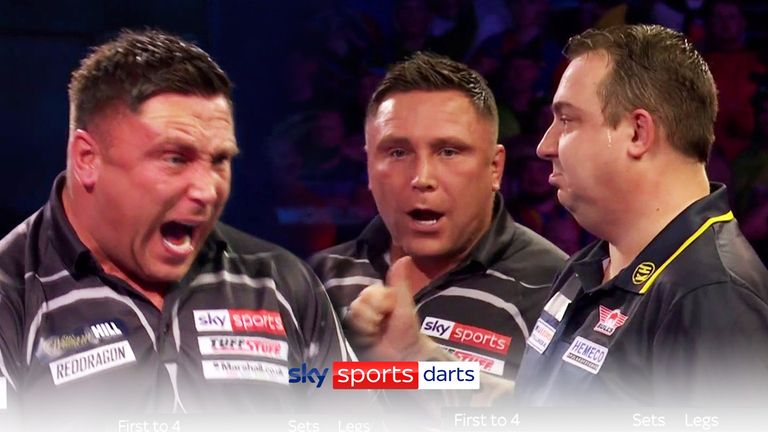 ‘The Iceman’ survived a scare to hold leg nine, but Huybrechts sent it into a sudden-death leg with a huge 114. The world No 1 had the throw and he showed his class under immense pressure to take out 76, making it through by the skin of his teeth. 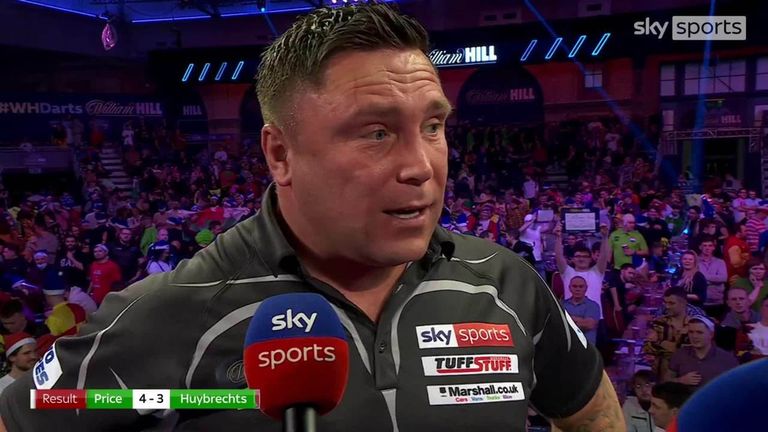 The Welshman eased through the opener before pinning a 121 on the bull to seal the second set in which he averaged a whopping 115.04.

Clayton won a last-leg decider to win the third set, and it was job done for ‘The Ferret’ who threw a second 121 on the bull and a 110 checkout on his way to a 4-0 victory to send out a warning to his rivals.

James Wade, who was due to play Vincent van der Voort in the first match of the night, received a bye to the fourth round after his Dutch opponent was forced to withdraw from the tournament after testing positive for Covid-19. 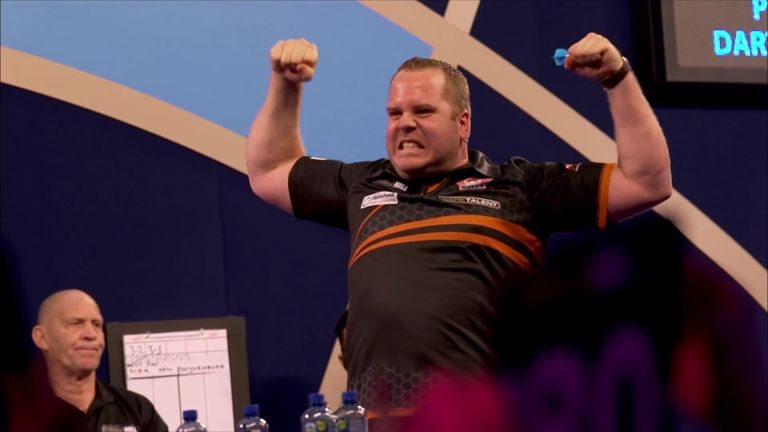 In the afternoon session, Dutchman Van Duijvenbode reeled off four sets in a row to stun Ross Smith. ‘Smudger’ stormed into a 3-0 lead and was a leg away from victory in the race to four, but from there the ‘Aubergenius’ clicked into gear. His crucially found his range on the outer ring, having struggled in the opening exchanges.

In the fourth set’s deciding leg, Smith failed to get a shot at double, in a 66 checkout attempt for the match. That proved a significant turning point, and Van Duijvenbode built unstoppable momentum to storm to victory. 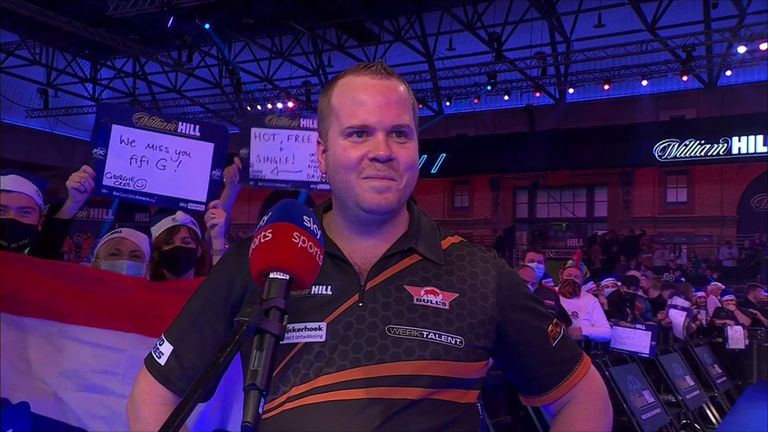 Meanwhile, Michael Smith saw off a gutsy display from William O’Connor. The Irishman claimed the opening set, but missed two shots at D20 for a 2-0 lead.

‘Bully Boy’ then reeled off eight legs without reply to seize control of the contest. ‘The Magpie’ did take the fifth set to bring it to 3-2, but Smith used all his experience to edge a dramatic sixth set. 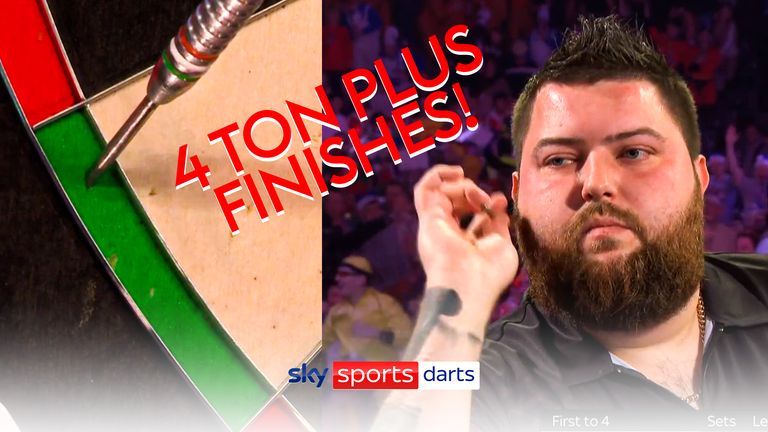 In the third and final match of the afternoon session, Australia’s Raymond Smith continued his dream Ally Pally odyssey with a 4-1 victory over Florian Hempel.

It was an impressive display from ‘Guru’, who averaged 94.79. He awaits Mervyn King or Steve Lennon in the last 16.

Emmanuel Macron has called on the UK government to tackle migrant crossings in the Channel by creating “legal, safe routes” to Britain. In a speech…

Conservative MPs are considering a rule change that would mean Boris Johnson could face a second confidence vote later this year, Sky News has learnt.…

The Omicron variant of coronavirus is “in retreat” and England is in the “next chapter” of its fight against the virus, the health secretary has…

An absolutely extraordinary PMQs. Millions of people tuned in last week across various channels to watch the PM give an explanation of that party in…