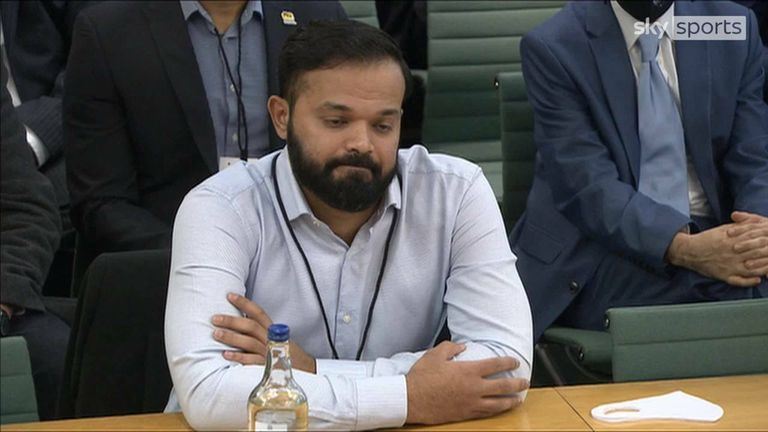 Azeem Rafiq fought back tears as he told MPs the word ‘P***’ was “used constantly” across his two spells at Yorkshire and no one in leadership challenged it.

Rafiq first alleged racial harassment and bullying against the county and accused them of institutional racism in September last year, with the club launching an investigation soon afterwards.

However, Yorkshire’s handling of it has been heavily criticised. They finally published summary findings of the investigation in September this year and, while the investigation found there was “no question” Rafiq had been subjected to racial harassment and bullying, no individuals faced disciplinary action.

Rafiq told the Digital, Culture, Media and Sport Committee on Tuesday: “Pretty early on at the club, I joined a dressing room full of my heroes, Michael Vaughan, Matthew Hoggard, part of the 2005 Ashes team. And it was just the most surreal moment for me.

“Pretty early on, me and other people from an Asian background… there were comments such as ‘you’ll sit over there near the toilets’, ‘elephant washers’. The word ‘P***’ was used constantly. And there just seemed to be an acceptance in the institution from the leaders and no one ever stamped it out.” Rafiq added: “All I wanted to do is play cricket and play for England and live my dream and live my family’s dream. In my first spell, I don’t really think I quite realised what it was. I think I was in denial.”

He said he started medication due to his deteriorating mental health and left Yorkshire for the first time in 2014.

When he returned he initially felt settled under captain Alex Lees and coach Jason Gillespie.

“Jason left in 2016 and it just felt the temperature in the room had been turned up,” said Rafiq. “You had Andrew Gale coming in as coach and Gary Ballance as captain.

“For the first time I started to see it for what it was – I felt isolated, humiliated at times. Constant use of the word ‘P***’.”

Rafiq said Ballance racially abused him on a 2017 pre-season tour.

Former England batter Ballance admitted using a “racial slur” towards Rafiq in a lengthy statement issued earlier this month, apologising but framing it as part of a long and deep friendship.

Rafiq told the committee that was not an accurate depiction of their relationship, saying it went downhill from 2013 onwards and had become toxic by 2017.

Asked by chair Julian Knight about the term ‘Kevin’, he said it was an offensive, racist term that reached the very top of the game.

“‘Kevin’ was a something Gary used to describe anyone of colour in a very derogatory manner. It was an open secret in the England dressing room,” he said.

“Anyone who came across Gary would know that was a phrase he would use to describe people of colour.”

He said: “Gary and Alex Hales got really close to each other when they played for England together. I wasn’t present in that dressing room, but what I understand (is) that Alex went on to name his dog ‘Kevin’ because it was black. It’s disgusting how much of a joke it was.”

‘I had red wine poured down my throat’ 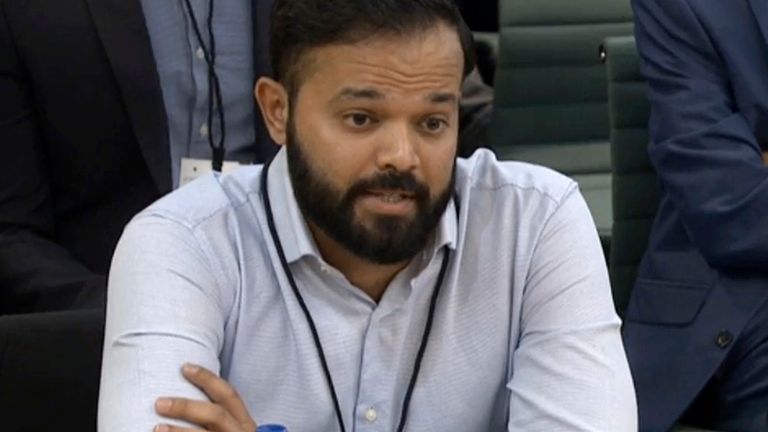 Rafiq said he started drinking alcohol in an attempt to fit into the dressing room culture at Yorkshire. (Warning: video contains content that viewers may find distressing)

Rafiq said he started drinking alcohol in an attempt to fit into the dressing room culture at Yorkshire. (Warning: video contains content that viewers may find distressing)

Rafiq, who is a Muslim, also described his harrowing first experience of alcohol at the age of 15.

“The player played for Yorkshire and Hampshire. I (then) didn’t touch alcohol until about 2012 and around that time I felt I had to do that to fit in.

“I wasn’t perfect, there are things I did which I felt I had to do to achieve my dreams. I deeply regret that but it has nothing to do with racism.

“When I spoke I should have been listened to. The game as a whole has a problem, with listening to the victim. There is no ‘yeah, but’ with racism; there is no ‘two sides’ to racism.”

Rafiq said the problem at Yorkshire was replicated “up and down the country”.

Asked about the fact others, such as former Essex and Northamptonshire player Maurice Chambers, had now spoken out, Rafiq said: “I would like to see it as progress that people are feeling like they can come forward and they are going to be heard and not just be discredited, smeared about, briefed about.”

He described England and Wales Cricket Board initiatives on diversity as “box-ticking” exercises and “tokenism”.

He added: “He’d been an England coach and commentator and I found it disturbing, because Sky is supposedly doing this amazing work on bringing racism to the front and within a week of me speaking out, that’s what I got sent to me and I thought, ‘God, there are some closet racists and I need to do something about it’.”

Rafiq added: “I think with four or five months left on my contract, I was encouraged to sign a confidentiality form and take a parcel of money which I refused.

“At that time it would have been a lot of money for me. I think my wife was struggling. I knew I was struggling. There was no way mentally I could have even considered putting myself through this trauma. I actually left the country. I went to Pakistan. I never wanted to come back.”

Asked how he had summoned the strength to come forward, Rafiq added: “I had an interview about my new business. I got asked a question. And I got emotional. I said everything.

“Even at that point, I genuinely thought that there might be some humanity left in some of these individuals. But no. They thought, ‘He hasn’t talked about Yorkshire’. It was all about ‘discredit, discredit, discredit’. I don’t know how I’ve done it. This last 14 months has been incredibly difficult.”

After the committee took a break as Rafiq became visibly emotional, Rafiq said he found it “hurtful” that England captain Joe Root said he had never witnessed anything of a racist nature at Yorkshire.

“Rooty is a good man. He never engaged in racist language,” Rafiq said.

“I found it hurtful because Rooty was Gary (Ballance)’s housemate and had been involved in a lot of the socialising where I was called a ‘P***’.

“It shows how normal it was that even a good man like him doesn’t see it for what it was. It’s not going to affect Joe, but it’s something I remember every day.”

Michael Vaughan is named in the independent report into Rafiq’s claims, but the former England captain has strenuously denied allegations he told four Asian team-mates: “(There’s) too many of your lot, we need to do something about it.”

Rafiq, Adil Rashid and Rana Naved-ul-Hasan all say they remember those words, while the fourth player Ajmal Shahzad has said he cannot recall any racism at the club.

Asked about Vaughan, Rafiq said: “Michael might not remember it… three of us, Adil, myself and Rana remember it.

“He probably doesn’t remember it because it doesn’t mean anything to him.”

Rafiq: I told ECB Yorkshire are not doing the right thing

Rafiq said Yorkshire’s investigation into his allegations had been “far from independent”.

He said that, while the investigation was live, members of the panel were entertained by the county at a Headingley Test match.

“It just shows the arrogance of these people,” he said.

Rafiq criticised the handling of his situation by the ECB and the Professional Cricketers’ Association (PCA).

He said: “When George Dobell published (his initial) article (in September 2020) I had a phone call from (ECB chief executive) Tom Harrison. I felt like he was listening, but then they took the stance that they would trust Yorkshire to do the right thing and then as regulators would come in to hold Yorkshire to account.

“It was difficult for me to take through the winter. I kept begging the ECB, the PCA, I kept telling them, ‘They (Yorkshire) are not doing the right thing, this is going to end up in a car crash for everyone’.

“No one wanted to do that until that Monday (November 2) when the article broke in Cricinfo, at that point the ECB came in.

“On a human point I felt like if someone else had told me they were suicidal and they were ringing you saying, ‘Please help’ I’d forget my constitution and help a human. Over the winter there were some real dark moments.

“I didn’t feel like they did that because they were concerned for me or worried for me, I feel that was done to tick a box in case I killed myself.”

Rafiq described the PCA as “incredibly inept” and added: “An organisation that should have supported me left me on my own.”

Rafiq said Matthew Hoggard had apologised to him after watching him being interviewed about his experience at Yorkshire.

“I took a phone call from Matthew and he just said ‘Look, I didn’t realise, I’m really sorry. If some of the comments I made made you feel the way you’ve described it, I just want to apologise’.

“You know what, when someone does that, I was like ‘thank you, I really appreciate it’.”