World No 1 Jon Rahm is in great shape to win his home Open de Espana for the third time as he reached the halfway stage just one shot behind halfway leader Wil Besseling. Watch live over the weekend on Sky Sports Golf. 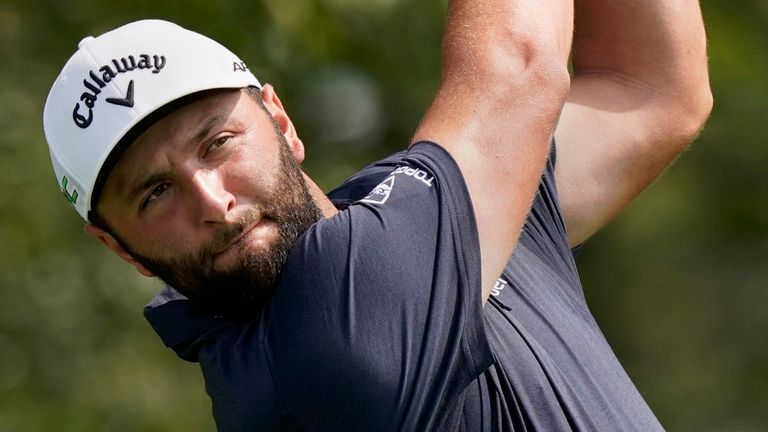 The best of the action from day two at Club de Campo Villa de Madrid as world No 1 Jon Rahm bids for a hat-trick of wins on home soil.

The best of the action from day two at Club de Campo Villa de Madrid as world No 1 Jon Rahm bids for a hat-trick of wins on home soil.

Jon Rahm kept his bid for a hat-trick of Open de Espana titles on track as he heads into the weekend just a shot behind leader Wil Besseling in Madrid.

Besseling added a 65 to his opening 64 and completed 36 holes without a single bogey on his card to hit the front on 13 under, but he will have the pressure of playing alongside Rahm for the third round at Club de Campo Villa de Madrid.

Rahm was struggling to make much happen over the first two thirds of his round and had just a couple of birdies before he revived his challenge and delighted his adoring home fans with his second eagle of the week at the long 14th.

The world No 1 gave a shot back at 16, but he pitched to a couple of feet following a wild drive at the last to close with his third birdie of the day and post a 67 which leaves him ominously placed at the halfway stage.

Rahm’s score was four shots higher than his opening 63, but he insisted the putting surfaces were trickier to cope with on day two, when he was among the afternoon starters with the course playing faster and firmer than on Thursday.

“The biggest difference is the greens,” he explained. “When you get some traffic, they’re not firm enough yet to where they are going to be as good in the afternoon, so yesterday morning the greens were perfect and we were making a few more putts, today in the afternoon it gets a little bumpy, it just happens.

“On that front nine I thought I hit a couple of really good putts that didn’t roll as true, or simply I just misread them, but everything is getting a little bit firmer and on a golf course like this, when things get firmer you need to be that much more precise and the difference of being in the fairway and not in the fairway can be quite big to control the ball into the green.

“So that is why you didn’t see 10 under today because of the firmness of the course. As it gets firmer, it is going to be a more demanding golf course obviously, more challenging and a much more fun golf course to play.”

Rahm bogeyed the 18th in the first round, but his aggressive approach to playing it second time around paid off, even if he was fortunate to get away with a poor swing with the driver.

“It was the whole plan to birdie 18,” Rahm added. “I wanted nothing to do with the right side, so I aimed just over the scoreboard, there are two white signs, so if I hit it good, I would get close to the green and have an easy chip, and if I missed it left I know taking line of sight I would be taking 50 yards from a perfect angle.

“So I aimed there but made a really bad swing. I was trying to hit it so hard but was able to take the relief, and kind of learned from my final shot two years ago on that hole, I know it releases a bit more than you think and hitting it to three feet was a bonus.

“I would have taken anything inside 10 or 15 feet as I was looking for a chance to make birdie, so hitting it to almost tap in was a real bonus.”

Besseling has posted only one top-10 finish this year and has missed the cut in his last two starts, including on home soil at the Dutch Open, but he has been happy with his form over the last two seasons and he expressed his gratitude to his family and backroom team for their support.

“The last couple of seasons have been really good,” he said. “I did struggle before that, so it is good to be out here performing well and making putts, and being on top of the leaderboard after 36 holes, hopefully it will stay that way come Sunday.

“But it is good to be here and that is the first step you need to make. I made some big changes, my caddie is a big support, obviously the family and home and my sponsors that always believed in me, and a new coach that really got me going.

“So finding the right people around me has really helped and gives me a good feeling and support. You still need to hit the ball and get the practice hours in, but we do it all together, and the last couple of years has been really good.”

Besseling and Rahm will be joined in Saturday’s final group by another Spaniard in Adri Arnaus, who fired a bogey-free 64 to race to 11 under alongside Shubhankar Sharma, who was also seven under for his second round.

Overnight leader Ross McGowan was unable to match the brilliance of his opening 61, but he is just two strokes off the pace despite a 70, while former Ryder Cup player Rafa Cabrera Bello and Scotland’s Grant Forrest going into the weekend on 10 under par.