Rangers suffered a narrow defeat to RB Leipzig in the first leg of their Europa League semi-final after a moment of brilliance from Angelino.

The Bundesliga side had few chances but take a narrow lead to Glasgow thanks to a stunning Angelino volley five minutes from time.

Ryan Kent flashed a rare chance wide for Rangers, but Giovanni van Bronckhorst’s side have it all to do Ibrox.

First, there is the matter of an Old Firm game with Rangers going to Celtic Park on Sunday six points behind the cinch Premiership leaders with four fixtures remaining and the Hoops also enjoying an advantage in goal difference.

It is therefore a pivotal week for the Gers who turned in another tenacious performance in Europe.

How Rangers fought to keep their European dream alive

With strikers Alfredo Morelos and Kemar Roofe still out injured, Van Bronckhorst had again to adapt and in what looked like a 5-3-2 formation with midfielder John Lundstram moved back, he gave a start to Stephen Wright up front with Ryan Kent.

Joe Aribo, Kent, Lundstram, Ryan Jack and Calvin Bassey all returned for the Govan side while RB Leipzig boss Domenico Tedesco was without midfielder Kevin Kampl and defenders Willi Orban and Mohamed Simakan through suspension.

There was little respite for the Light Blues and in the 16th minute Bassey blocked a goal-bound shot from Nkunku before Goldson, with equal desperation, prevented Szoboszlai’s shot troubling McGregor.

With their first corner just before the half hour mark, Goldson headed Borna Barisic’s delivery over the bar but Rangers were soon defending again with skipper James Tavernier getting in the way of a terrific strike from Angelino.

With Aribo further up after the break, Rangers had their first real chance at the start of the second half when Kent worked some space in the RB Leipzig box and fizzed the ball across the front of skipper Peter Gulacsi’s goal but found no takers.

At the other end, McGregor beat away a drive from Nkunku – a reminder for the Govan men of the home side’s threat.

RB Leipzig took a grip and Rangers were again on the back foot but still the Ibrox side’s defence defended resolutely.

Fashion Sakala replaced Wright after 68 minutes and moved into the centre-forward position but moments later the visitors should have found themselves behind.

Nkunku burst into the Rangers box and rounded McGregor but with the goal gaping he hammered the ball over the bar – it was a huge let-off for the Light Blues.

In the 75th minute Gulacsi gathered a long-distance effort from Kent before Nkunku beat Bassey to a header but again missed the target and then McGregor tipped a shot from Tyler Adams over the bar.

From the corner Sakala headed clear but only to Angelino who volleyed past the Gers keeper from 20 yards to give the home side the advantage for the game in Glasgow.

What the managers said 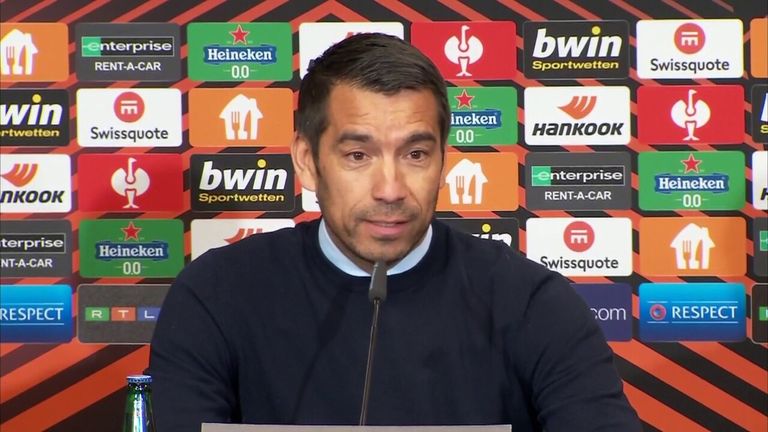 Rangers manager Giovanni van Bronckhorst is backing his players to turn their Europa League semi-final tie around after a narrow defeat in Germany.

“I thought we were well organised and didn’t give many chances away.

“It’s always disappointing when you lose a game so late but the players played really well.

“We know what to do next week, we play at home and are sure Ibrox will give us the energy to give everything.

“I think we had an overall good display, of course next week we have to win so we have to make sure we’re going to attack them at the right moments.

“A 1-0 defeat away from home in Europe, we can overcome that and Ibrox will give us the energy.”

“It was a tough game. Normally Rangers are not that deep, they were compact and it was pretty hard to play against such an opponent.

“In the second half we had three or four good chances, and the most difficult one we score.

“It’s a little bit of luck there, we know [Angelino] has a brilliant left foot. He would shoot 10 times there and probably score twice.

“Now Rangers have to come – maybe not from the start – but they have to come out more and when there are more spaces we are better.”

Rangers travel to Celtic as they try to close the gap at the top of the Scottish Premiership. The game will be live on Sky Sports Football this Sunday from 11am; Kick off 12pm.

RB Leipzig travel to Borussia-Park where they will play Borussia Mochengladbach. An away win will further help secure Leipzig’s place in the Champions league next season; they currently trail in 3rd place behind Bayer Leverkusen by 1 point.