At the start of Ryan Lowe’s reign at Plymouth Argyle in the summer of 2019, with the club in League Two, he let the cameras in for a behind-the-scenes documentary.

In one of his first team talks before a pre-season friendly, he was filmed saying…

📅 November 2021:@Only1Argyle are top of League One & just attracted 16k fans, their biggest crowd in 13 years

Ryan Lowe’s a man of his word 🙌 #PAFC pic.twitter.com/snGkKaWNbV

Just over two years later, he has proven to be a man of his word. More than 16,000 were in attendance at Home Park last month as they faced Ipswich, their biggest attendance in more than a decade.

And they certainly didn’t let anyone down, winning 2-1 to consolidate their place in the early race for automatic promotion from League One.

“Sometimes when you do those documentaries you think, ‘oh gosh, should I have said that?!'” Lowe tells Sky Sports after winning Sky Bet League One Manager of the Month for October.

“But we knew this place had been a sleeping giant. We knew we wanted to get it bouncing again and when we got promoted, it would have been great to see a promotion party.

“Unfortunately that couldn’t happen, and we had a year without fans which wasn’t great, but now we’ve got them back, we don’t want to let them down. We will lose games at times, but it will never be due to a lack of effort.

“We had more than 16,000 in the stadium against Ipswich and we certainly didn’t let them down then. We want to bring pride back to the city of Plymouth. I hope that’s what we’re doing.” 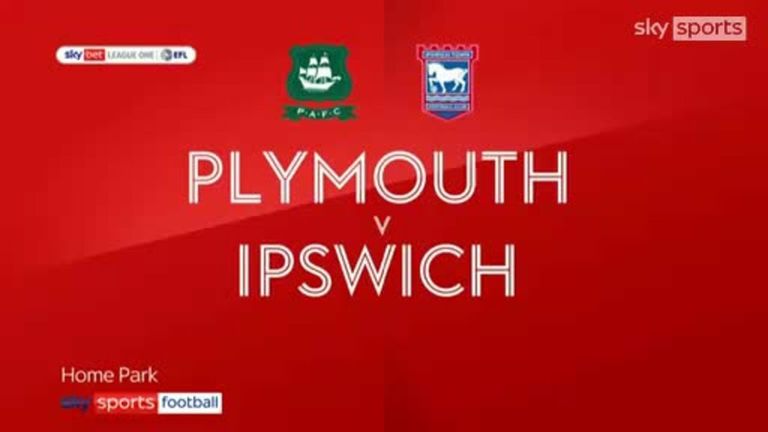 It has been an unbelievable start. In his first season in charge of the club – the curtailed 2019/20 campaign – he took them into League One – his second consecutive promotion from that league after doing the same with Bury the previous season.

Last season was one of consolidation, as they stabilised in the third tier. This season, they have kicked on again and are right in the mix as the halfway point approaches. They are unbeaten since losing their first game way back in August.

“People will say we’ve exceeded expectations so far but I’ve always felt that when you’re in the league, you’re there to finish as high as you possibly can,” he says.

“Last season our remit was to stay in the division – this season we want to get higher and so far, we’re doing that. We are unbeaten since the first game of the season, which is a great position for any club to be in and obviously with that, expectations will rise.

“But we’ve just got to keep our feet firmly on the ground, to keep producing and playing the right way. If we keep collecting results then we’ll see where it takes us come the end of the season.”

Plymouth’s 3-5-2 formation is aiding them with being solid at one end of the pitch and creative at the other. They are among the highest scorers in League One, and have among the best defensive records.

It is no mean feat when you consider how many of the clubs also vying at the top end of the table – Sunderland and leaders Wigan among them – have been in the Premier League and Championship recently.

“It is ridiculous when you look around, but we are one of those big clubs too,” says Lowe. “We’ve got a plan to get to the Championship within five years, and to be a sustainable Championship club. And we would like to think we can achieve that.

“Last season was a big learning curve. You only have to look at the teams who came up with us from League Two and then went back down. It’s a tough league anyway and there was the pandemic and everything that came with it.

“There were some games we lost heavily, and times we lost a few on the bounce, but I think it’s an experience that has helped us to be better equipped for this season. We had to find more consistency, and I think we’ve done that. And now we want to continue it. “

Lowe has friends in the game that have helped him. Steven Gerrard is an ally, and we spoke on the morning that Gerrard made the move from Rangers to Aston Villa.

There are, currently, no plans to call in a few favours in January to bring some young talent to Plymouth. But there may well be a few trips to Villa’s Bodymoor Heath training ground on the horizon for the Argyle squad on one of their long away days from southwest England.

“I will be getting in touch to hopefully use their training base every other Friday when we’re travelling for away games! Hopefully that will help,” Lowe jokes.

“I’ve already congratulated him. He’s done a fantastic job at Rangers and they will miss him. But he had to go and pit his wits against the best managers in the world in the Premier League. I’m sure he will be a fantastic addition for them.”

Some of those managers Lowe references are men that he looks up to and studies. He relishes any opportunity to learn from the best – using his Liverpool connections in the past to tap into the mind of Jurgen Klopp. He even brought along the German’s favourite brand of beer for the chat.

There was also a plan to head to the Etihad to meet Pep Guardiola – but the pandemic delayed that dream at the time.

“I never got the chance to meet Pep!” laments Lowe. “I was buzzing to go and see him. We had a doctor at Bury who worked at Manchester City, but it never came to fruition.

“I’m always in awe of any manager at that level – especially Klopp because he’s Liverpool manager – and when I got the chance to meet and speak with him it was unbelievable.

“I’ll watch any manager to see what he’s doing. I like Antonio Conte and Thomas Tuchel. But it’s not just about tactics, I’ll watch them in interviews too to see how they communicate. Brendan Rodgers, David Moyes, I look at them all and see if I can take little bits out of what they’re all doing. It can only be good for me.

“Hopefully when the Covid stuff settles down a little bit more, I can get in and have some more conversations with these managers. It’s all about learning.”

But he did, with a smile, admit that if he does ever make it to the Etihad Campus, he won’t be turning up with a crate of beers.

“I don’t think I’d be bringing Pep a drink to the training ground!” Lowe jokes. “It might not be appropriate for that time of day! If we meet them in the FA Cup then maybe.”

As a manager, Lowe is on the rise. His reputation is high and one day he plans to be managing in the Championship, and maybe even beyond.

It is a level he would love to reach with Plymouth.

“Everyone at the club is on the same page,” he says. “And everything is geared up for us to keep climbing. It won’t be easy. But what I will say is from the top down, it’s a work in process, at this moment it’s paying off and long may that continue.

“We’re overachieving now and to get to the Championship would be a massive achievement. We’ve got a five-year plan to get there. We’re not desperate to get up this season or even next season, and if it doesn’t work out in five years, the football club will still be in good shape because we’ve got a good structure in place here.

“Some clubs don’t do that, some clubs feel the need to throw money at it, but we can’t do that because we have to consolidate within our budget. There are big clubs in this league desperate to make that jump, and there is a real risk factor if you spend too much and don’t make it.

“If we could get anywhere close, it’ll be a massive achievement. But we know we’ve done nothing yet. It’s only been 16 games. We just need to stay in and around the top half, and if we do that we’ll have a chance.”

With Lowe at the helm, Plymouth have more than just a chance of ending that 12-year wait.