By Marc Bazeley at Emerald Headingley

Two tries from Leah Burke helped St Helens secure the treble and make it a Grand Final double for the club as they defeated Leeds Rhinos 28-0 to secure the Women’s Super League title on Sunday.

Burke’s unconverted try and Jodie Cunningham’s breakaway score just before the end of the first half helped Saints into a 10-0 lead at the break at Emerald Headingley despite the latter having spent 10 minutes in the sin-bin.

The Rhinos, who were champions in 2019, had opportunities too but were dealt a blow when Sophie Nuttall was stretchered off towards the end of the half after a lengthy spell of on-field treatment after suffering an injury while stopping Carrie Roberts from getting over the line.

And a second score from Burke after the break broke Leeds’ resolve once and for all, with Amy Hardcastle, Zoe Harris and Danielle Bush getting in on the act too as the Challenge Cup and League Leaders’ Shield winners capped off a perfect season – along with emulating the men’s team in securing Grand Final glory.

It was a cagey opening to the contest, but Saints carved out the first real opportunity in the 10th minute as player of the match Chantelle Crowl’s offloading game got them moving forwards only for Burke to be halted just short of the try-line.

Moments later, Woman of Steel Cunningham was sent to the sin-bin for a professional foul after Leeds tried to get upfield quickly from a 20-metre restart, yet St Helens saw out that period and took the lead in the 21st minute.

The opening score came as the influential Harris chipped into the right corner of the Rhinos’ in-goal area and winger Burke showed superb skill to gather the ball and dot it down just before going into touch. 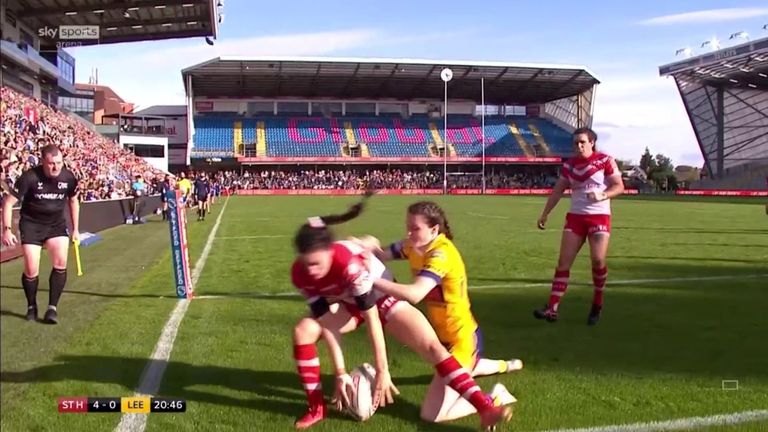 Leah Burke just managed to get on the end of a lovely kick from Zoe Harris to open the scoring in the Women’s Grand Final!

Leah Burke just managed to get on the end of a lovely kick from Zoe Harris to open the scoring in the Women’s Grand Final!

Leeds were able to threaten the St Helens line, finding space down the left edge particularly, and even after Nuttall – scorer of two tries in their semi-final win over York City Knights – had to leave the field they managed to force a goal-line drop-out.

But they were unable to retain possession from the kick and St Helens quickly countered, with England international Cunningham spying a gap and bursting away to score under the posts, redeeming herself for her earlier yellow card.

Beth Stott converted just as the hooter sounded to put the regular-season table-toppers 10 points clear at half-time and Leeds found themselves on the back foot soon after the restart after Hanna Butcher fumbled the ball from the kick-off, but this time their defence held firm.

The Harris-Burke combination did for the Rhinos again in the 58th minute though, this time with the half-back putting in a grubber kick to the right corner followed by the former gymnast acrobatically diving on the ball and grounding it one-handed for her second unconverted try of the afternoon. 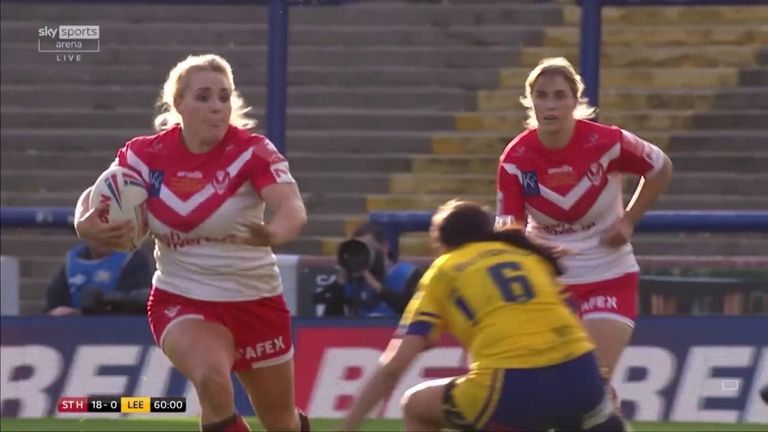 Saints were in again straight after the restart, with Paige Travis making the initial burst before centre Hardcastle was released to out-pace the defence from inside her own half and finish for another unconverted try.

Harris then went from provider to score on 68 minutes, taking a cut-out pass from loose forward Cunningham and accelerating through a gap in the defence to score followed by half-back partner Stott adding the extras.

Winger Bush’s try with eight minutes to go added some extra gloss to the scoreline as St Helens proved too strong for their opponents and made it a clean sweep of all three prizes up for grabs in the women’s game in 2021.