‘The Queen of the Palace’ will aim to secure a PDC Tour Card at 2022 UK Qualifying School, which takes place from January 9-15 in Milton Keynes; Sherrock says that her confidence is high and she has great belief in herself

Fallon Sherrock will start her bid to secure a PDC Tour Card at 2022 UK Qualifying School on Sunday and says her confidence is “so high” right now.

‘The Queen of the Palace’, who continues to break new ground for women in darts, has the chance to secure a spot on the professional circuit over the course of seven days in Milton Keynes.

Qualifying School, or Q-School, features more than 650 players bidding for the 32 Tour Cards available. Concurrent events are being staged in the UK and Germany.

Sherrock first made a global audience aware of her talent during the 2020 PDC World Championship at Alexandra Palace.

After becoming the first woman to win a match at the showpiece tournament, she then prevailed over Mensur Suljovic in the second round. The 27-year-old’s run was halted by Chris Dobey in the third round.

Following her achievements on the Ally Pally stage, a wealth of invitations to compete came her way. However, the global pandemic put paid to many.

“I think after lockdown and then when I lost all of these opportunities, I thought that I just needed to let it go,” Sherrock said to the PDC ahead of Q-School.

“I thought your darts aren’t where they were, and it was a little kick-starter for me to prove to the world what I can do.”

Upon her return to Alexandra Palace in December 2021, she was denied a second dream run in the World Championship. Sherrock was edged out 3-2 by an impressive Steve Beaton, who was making his 31st consecutive appearance.

Both players performed magnificently though, and the encounter concluded a productive year for the 27-year-old.

Fallon Sherrock offers an insight into the highs and lows of her 2021 campaign as she bids to win a Tour Card at this year’s Q-School… pic.twitter.com/suNhWWVqXH

“I’m very happy with the last 12 months,” Sherrock said. “Especially with the Grand Slam, the Women’s Series and obviously the World Series events I played in as well, I never expected it all to come in one bundle.

“Going into the Grand Slam, yes I lost to Peter Wright but in a long format. Leading into that match, I thought that I’d already done it against Michael [van Gerwen], so I could do it against Peter. It’s made me believe a little bit more now.”

The contest Sherrock refers to with Michael van Gerwen took place at the Nordic Masters in Copenhagen. Van Gerwen had to come from behind to beat Sherrock 11-7 in the final, after she’d stunned Dimitri Van den Bergh in the semi-finals.

Not for the first time, Sherrock had highlighted her battling qualities and ability to stay cool under pressure, to come back from 7-1 down against Van den Bergh.

I am over the moon to have won here in Copenhagen, and the feeling is phenomenal again.

Huge credit to @fsherrock over the whole tournament she has been phenomenal. She pushed me harder than some tour card holders. She is a top talent not for ladies darts, but for darts. pic.twitter.com/XqopWUb8MZ

With the confidence she gained from her tussles with Wright and Van Gerwen, her performance and run at the Grand Slam of Darts and maturing continually as a player, Sherrock now feels in excellent shape ahead of Q-School.

“My confidence is so high at the moment and I actually believe in myself now,” Sherrock shared.

“Before I thought that I could play but whether I did was another issue. I wasn’t sure which game was going to come up on the stage. 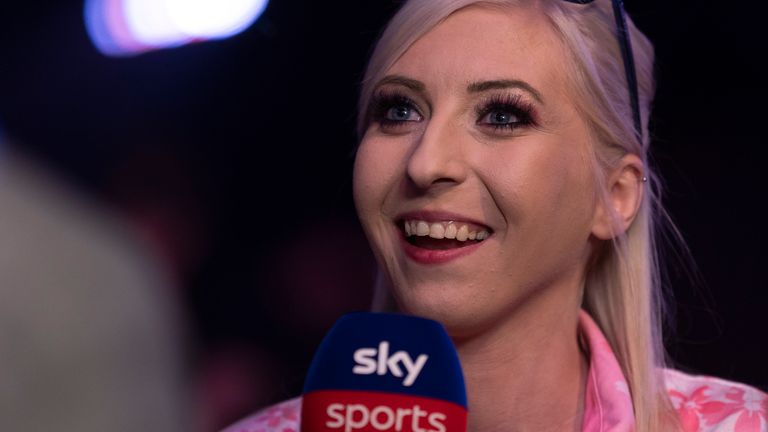 Now, I believe that I can do it. The difference now is that I actually have belief in myself.

“I was always the one going under the radar, there were always the top women who were achieving everything and I saw what they were doing and wanted to do it myself. In hindsight, they inspired me to do all of this because I wanted to be like them.

“I’m hopefully going to try and get a Tour Card because that’s the one thing that I need to do, to see how far I can push my game.

“In the next 12 months, I want to try and qualify for as much as I can, get more TV experience and show everyone what else I can do.

Nicola Sturgeon faces renewed calls to lift COVID restrictions when she announces Scotland’s next steps in combating the virus. Sporting organisations have echoed the hospitality industry…

No 10 policy bosses have explored the use of powerful sonic weapons to force migrants to turn around in the English Channel, amid a growing…