Sherrock posted a record-breaking 101.55 average to whitewash De Decker in her second group game; Anderson and Van Barneveld will meet for the 46th time in Tuesday’s headline act, live on Sky Sports Arena from 7pm

Fallon Sherrock could create another slice of history by becoming the first woman to advance through the group stages at the Grand Slam of Darts on Tuesday evening, as darting juggernauts Gary Anderson and Raymond van Barneveld also battle it out for last-16 qualification.

Krzysztof Ratajski, Stephen Bunting and Mervyn King were among the high-profile names to exit on a dramatic night on Monday, and there’s a host of big hitters aiming to avoid a similar fate when Groups E-H draw to a close this evening.

Sherrock kept her Group E hopes alive with a remarkable whitewash win over Mike De Decker in her last outing, landing four 180s and posting a 101.55 average – the highest recorded by a women in televised competition.

The 27-year-old surpassed the 100.34 record set by Lisa Ashton at the UK Open in March, to become the first woman to prevail at the Grand Slam since Anastasia Dobromyslova shocked Vincent van der Voort in 2009. 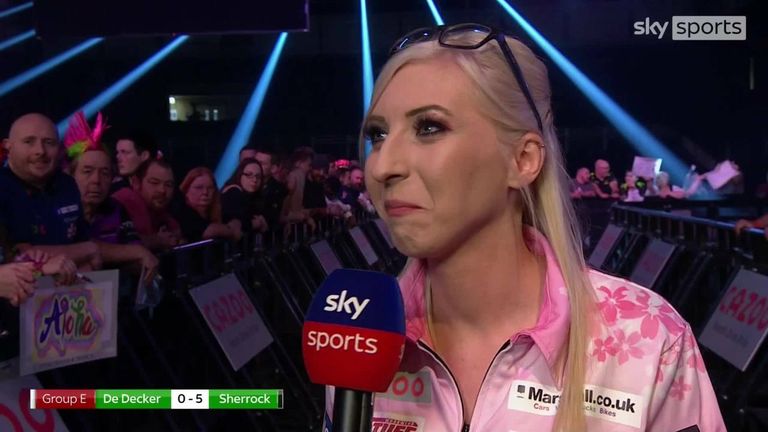 Dobromyslova failed to emerge from her group, although Sherrock will progress if she defeats Gabriel Clemens 5-3 or better, after ‘The German Giant’ threw the group wide open with a 5-4 victory over second seed Peter Wright.

“Sometimes you throw so well you scare yourself, and I think there’s a very good chance of [Sherrock] getting through the group now because of that result,” Part told Sky Sports.

“Beyond that in the longer format, if she plays in a similar fashion to Sunday’s match, she should be able to go further even.

“The strength of Fallon’s game lies in the scoring, so if you can do that, you can survive these long match-play matches.”

Another fascinating sub-plot ahead of Tuesday’s round-robin finale is the winner-takes-all clash between Anderson and Van Barneveld in Group H, with the winner likely to face Michael van Gerwen for a quarter-final spot.

Van Barneveld’s highly-anticipated return saw him succumb in a last-leg decider to Michael Smith in Saturday’s headline act, but the 2012 champion whitewashed a struggling Joe Davis on Sunday, to register his first televised victory since emerging from retirement.

“I never ever thought I was coming back when I retired, but I was missing it. To be playing for this crowd, they are amazing, they always back me,” the Dutchman declared.

“When I retired I was bad. I wasn’t a nice person for the people around me, for my family and my fans. 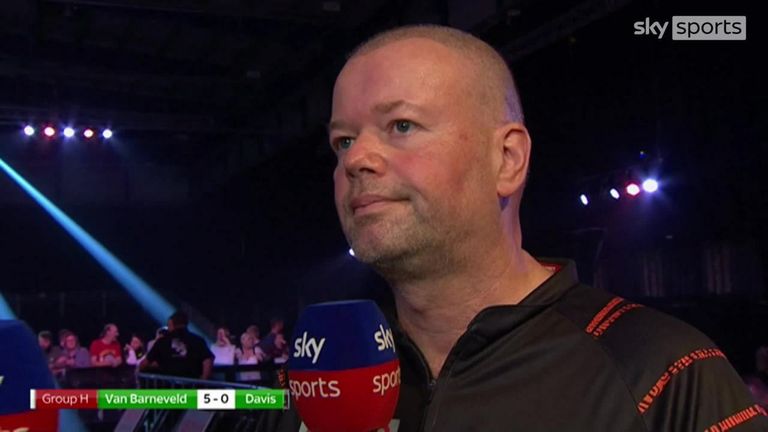 “That was my best decision ever [to return], and I feel really good. I feel reborn.”

The five-time world champion now takes on his old adversary Anderson in a blockbuster showdown, as the two-time finalist bids to maintain his remarkable record of having never failed to advance through the group stages.

Anderson has played the most matches (72) at the Grand Slam since its inception, and he’s made no secret of his love for a tournament that has so far proven elusive for the two-time world champion.

However, the Scot has underwhelmed since reaching January’s World Championship final, and with little to separate the pair in terms of averages in 2021, it could be a contest decided by the finest of margins.

Elsewhere, world No 2 Peter Wright and reigning champion Jose De Sousa are looking to seal their qualification from Groups E and F respectively.

Wright has endured an alarming slump in form since lifting the World Matchplay title in July, which saw him boast an imperious tournament average of 104.91.

Nevertheless, ‘Snakebite’ has lost four of his last five individual televised matches, failing to average above 97 on any occasion, and defeat against Mike De Decker could condemn him to a second successive round-robin exit.

De Sousa requires just three legs from his tie against Luke Humphries to progress, but ‘The Special One’ is yet to produce the type of blistering form that catapulted him to glory 12 months ago, and UK Open finalist Humphries represents a major threat.

‘Cool Hand’ is jostling for qualification alongside 2018 semi-finalist Mensur Suljovic, who prevailed when the pair locked horns in an absorbing affair on the opening night.

Suljovic takes on Canadian qualifier Matt Campbell in his decisive Group F tussle, knowing that victory by a 5-3 scoreline or better guarantees him a last 16 berth, while Campbell must win comprehensively if he harbours any hopes of advancing.

Michael van Gerwen delivered a stunning 115.19 average in his 5-2 success against Joe Cullen – the highest in Grand Slam history – and the three-time winner is bidding to continue his irrepressible form against World Cup winner John Henderson. 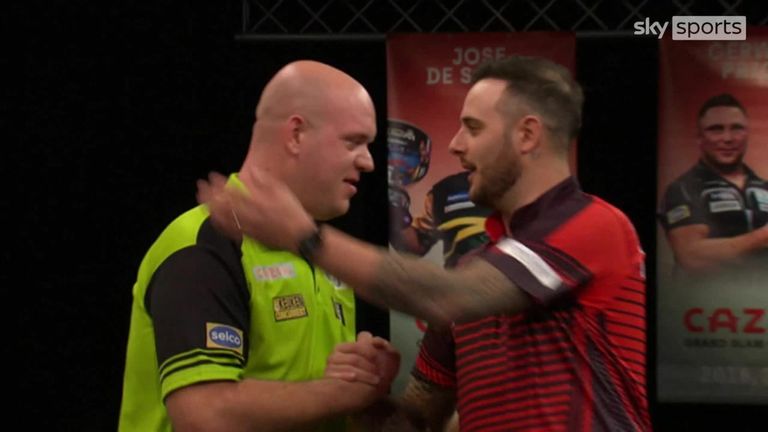 ‘The Highlander’ is still alive in Group G, although Cullen will confirm his progression with victory over four-time women’s world champion Lisa Ashton, who must whitewash ‘The Rockstar’ to have any chance of qualifying.

The world No 10 has recorded wins over Van Barneveld and Anderson to establish control of Group H, and he starts as an overwhelming favourite, as Davis continues to struggle with a tennis elbow injury.