Michael Smith defeats Jonny Clayton in a classic with both players sharing five ton-plus finishes and throwing 25 maximums; No 1 Gerwyn Price showed no mercy in his latest victory, while Gary Anderson won a third-round thriller to advance on another dramatic night of darts 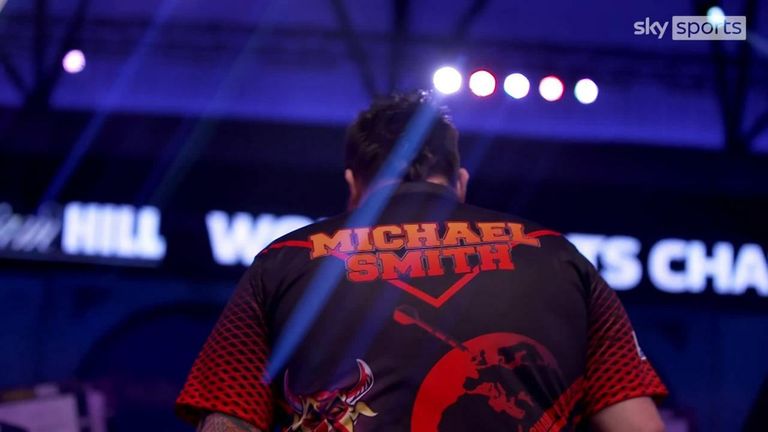 Gerwyn Price set up a blockbuster New Year’s Day showdown with Michael Smith at the World Darts Championship after both came through in the last 16, while Gary Anderson set up a stellar showdown with Rob Cross.

Price, the defending champion and world No 1, lost the opening set to Dirk van Duijvenbode before flexing his muscles to complete a handsome 4-1 win, landing five ton-plus finishes along the way as he became the first player through to the quarter-finals.

Clayton set up a showdown with Price in the last eight after a rollercoaster of a ride against Michael Smith – winning the 10th leg of the deciding set to seal a phenomenal 4-3 victory.

In the final third-round match, two-time world champion Gary Anderson survived a match dart to find a way to edge past Ian White​ in another thrilling encounter. 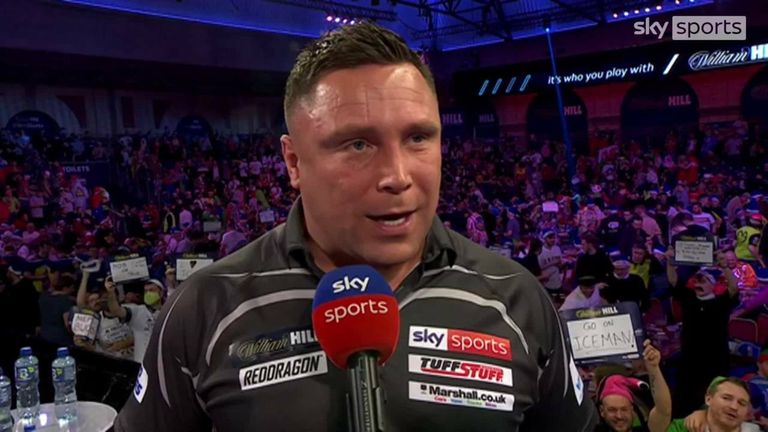 Van Duijvenbode made a storming start to his clash with Price, showing the top seed just what he is capable of by snatching the opening set with a 12-dart break.

But the Welshman raised his game to sweep through the next two sets without reply before extending his lead with a second ton-out and a roof-raising 132 bullseye finish in back-to-back legs.

Price was getting better and better as he landed a spectacular 164 on the bull at the start of the fifth leg.

And he completed a resounding performance by reeling off a 12th leg on the bounce with a saucy 136 checkout. Price hit FIVE ton-plus finishes during his win against Van Duijvenbode, including two checkouts on the bullseye

Price hit FIVE ton-plus finishes during his win against Van Duijvenbode, including two checkouts on the bullseye 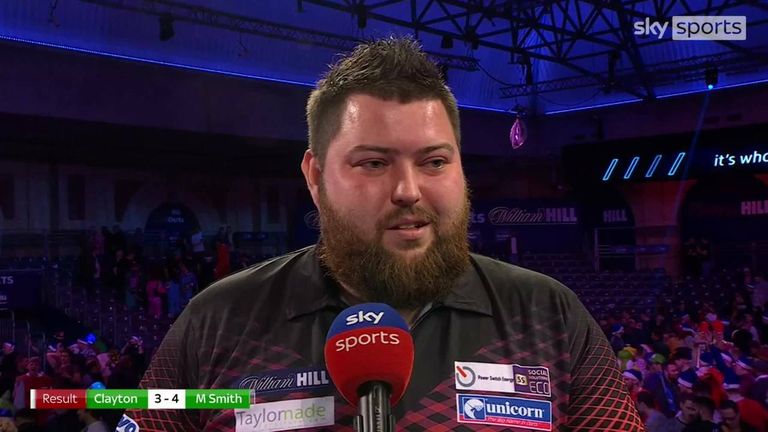 St Helens sharp-shooter Smith responded in superb fashion by winning the next two to level up a gripping contest with a 101 average to Clayton’s 104. 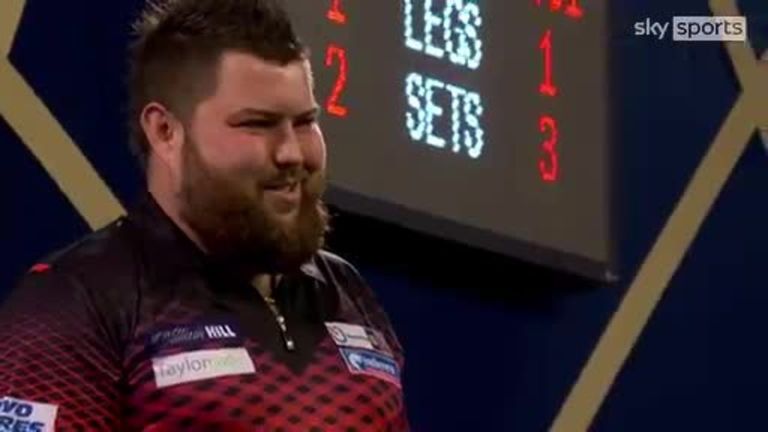 ‘Bully Boy’ moved one set away from recording an upset by pinning tops, but then the contest exploded into life.

Clayton hit back with a 180 and a stunning 161 to break throw in the opening leg of the sixth set. Then Smith pinned a 121 checkout on the bull, but the Welshman nailed 105 and double 12 to send the clash into a deciding set shootout. 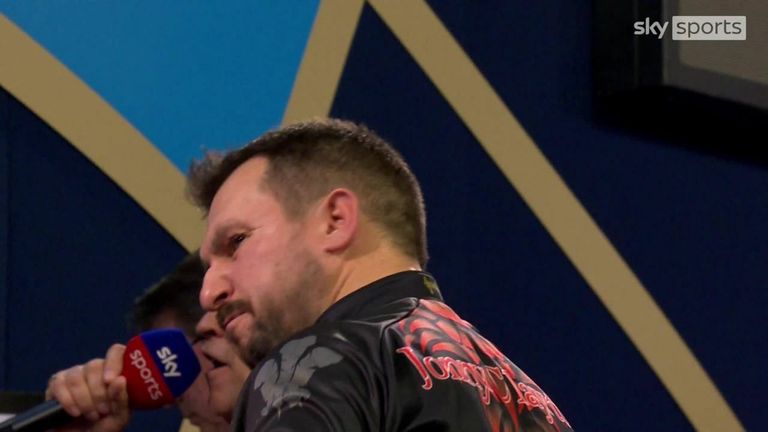 Smith produced a timely 112 checkout to break throw and go within a leg of victory at 2-1. However, the Premier League champion Clayton replied with a timely 120 to save his skin as the match headed into a tie-break situation.

At 4-4 in legs, Smith took out 65 to break throw before completing an amazing win with double 10.

‘Diamond’ White missed 15 darts at doubles but he still managed to sneak the first set against Anderson, then doubling his advantage to leave the two-time World Champion with plenty of work to do. 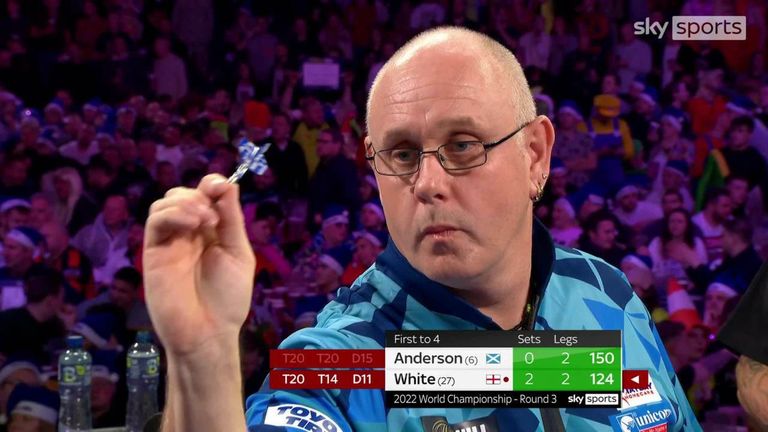 Although Anderson stuttered into life with a 111 finish, it was White who moved three sets up with a fabulous 124.

‘The Flying Scotsman’ pulled one back to stay alive, despite an average of 87.64, before clinching the next against the throw. 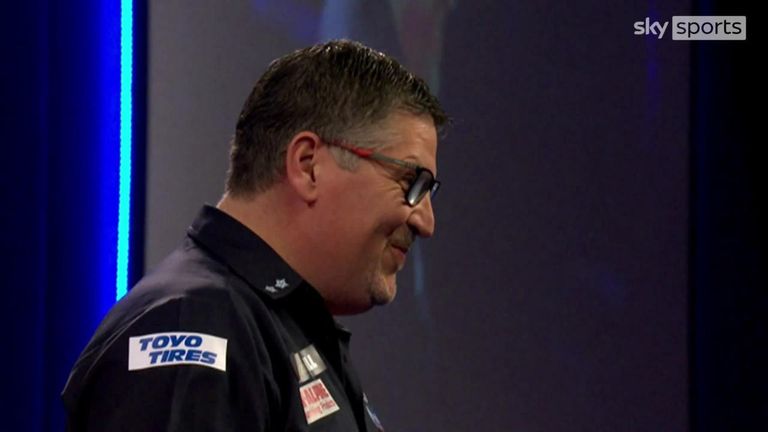 Before this week a player had come back from 0-3 down in sets to win 4-3 in a match at the PDC World Championship on only six occasions. It has now happened twice in the last three days.

He completed an unlikely comeback – after punishing White for hitting the wrong bed with a match dart – with his second 111 finish of the match before sealing the deciding set 3-1. 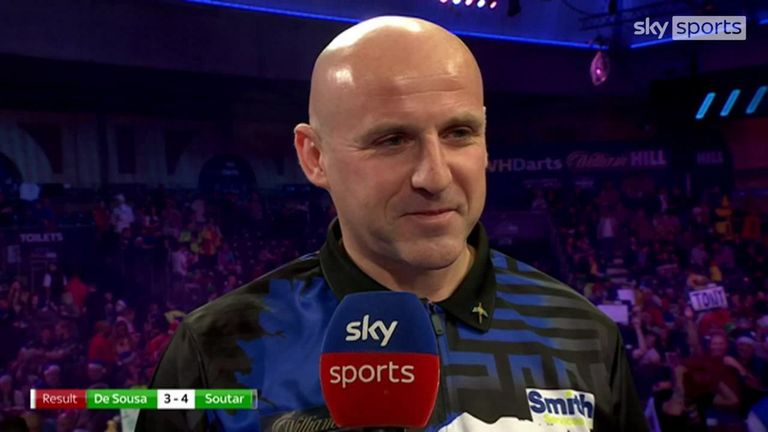 Alan Soutar took out another huge name, this time beating Jose De Sousa to reach the last 16 of the Worlds

Alan Soutar took out another huge name, this time beating Jose De Sousa to reach the last 16 of the Worlds

Scottish firefighter Alan Soutar extinguished the hopes of Premier League finalist and world No 7 Jose De Sousa to reach the last 16 of the tournament on debut.

‘Soots’ nailed a massive 136 to complete a stunning 4-3 win over an out of sorts De Sousa, recovering from 3-2 behind to continue his fairytale run at Alexandra Palace. 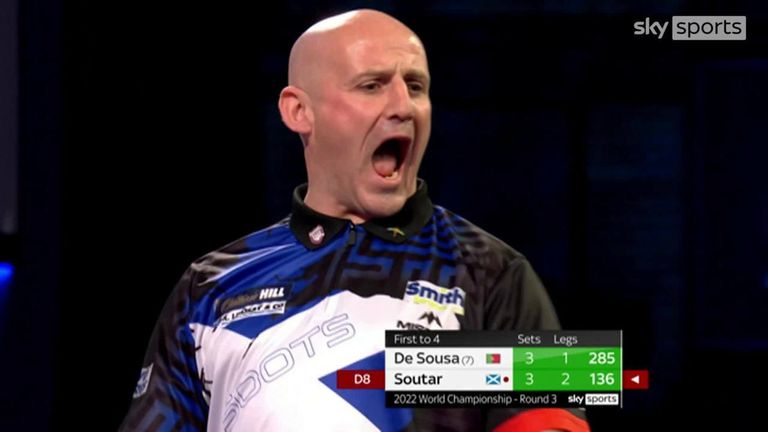 Soutar won the match with this blockbuster 136 checkout…

Soutar won the match with this blockbuster 136 checkout…

Despite 45 missed doubles and 88.54 average, Soutar said he was “absolutely buzzing” when speaking to Sky Sports’ Polly James after his win. 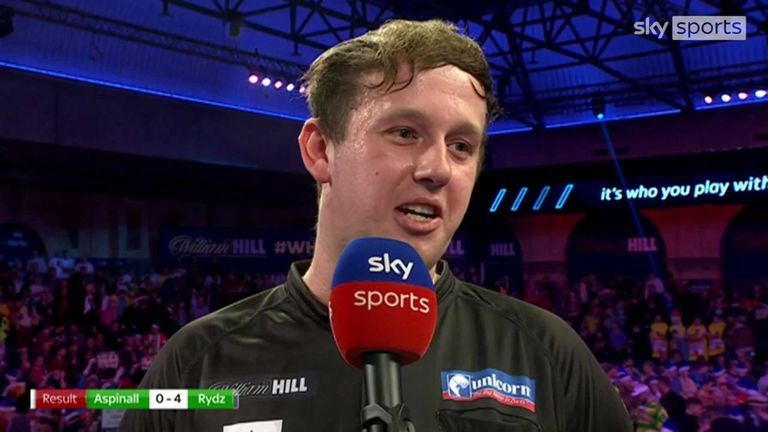 Callan Rydz doesn’t see himself as a serious contender, despite a whitewash win over Nathan Aspinall

Callan Rydz doesn’t see himself as a serious contender, despite a whitewash win over Nathan Aspinall

Callan Rydz caused a seismic shock of his own in the last match of the afternoon by ending the hopes of former two-time semi-finalist, Nathan Aspinall.

The Geordie thrower knocked out the world No 10 with a riot of a performance, averaging 98.35, hitting seven 180s and 41.4 per cent checkout percentage.

Rydz is relentless. No fuss. No drama. No bother. No sets lost.

Callan Ryz hits the tenth 10-dart leg of the tournament to win his game 4-0.

Aspinall, who was struggling on the oche with tendonitis and tennis elbow, could not cope with the finishing power of Rydz, who will now take on Soutar for a spot in the quarter-finals on Thursday afternoon.

Dave Chisnall became the third player to withdraw from the Worlds due to a positive Covid-19 test meaning Luke Humphries received a bye to the fourth round.