Michael Smith found it hard to resist the temptation.

When he glanced a header in to set Rotherham on the way to an eventual 5-1 rout against Sunderland on October 30, after a split-second of hesitation, he raised his arm and wheeled away in celebration, just as Newcastle legend Alan Shearer had done so many times throughout his career.

It made a brief reappearance when he nodded in a fourth with just under 20 minutes left to play – his 12th goal of the season; one that sent him to the top of the Sky Bet League One scoring charts.

“It was for my missus because she’s from Sunderland! Her mum and step-dad are massive Sunderland fans and season ticket holders at the Stadium of Light,” he tells Sky Sports.

“But then my mates jumped on it, as did a lot of people on Twitter. It’s always nice to score against Sunderland, though!”

As a boyhood Newcastle fan, playing a key role in such a crushing defeat of Lee Johnson’s Black Cats will no doubt have filled him with pride.

It may have even caught the eye of the new regime at St James’ Park, particularly if the £10 million valuation Millers manager Paul Warne’s slapped on the 30-year-old back in August is to be believed.

“I’d go to Newcastle as kitman one day!” he jokes. “They have made an exciting appointment in Eddie Howe but he’s going to need a few transfer windows before you can judge him, but he’s got a massive task on his hands keeping them in the Premier League. He’s got the tools with the with the takeover and hopefully they’ll back him in the transfer window.

“I know that [valuation] was tongue-in-cheek, but I think it helps massively, especially as a striker, to know that the manager believes in you, believes in your ability and, even if you have a few bad games, he’s always going to be there for you.

“I can’t speak highly enough of the manager and the staff. I’ve said in an interview recently that I was at a bit of a crossroads before I came to Rotherham and I’ve done a U-turn since then and had two seasons in the Championship.”

It is safe to say the crossroads has long since been bypassed. Now in his fifth season at the New York Stadium, Smith is settled in the area and, arguably, in the form of his life.

In the last two seasons, he scored a respectable total of 22 goals in all competitions, but a return to League One seems to have stoked a fire deep within; in 19 games this term, he has scored 13 and assisted three more.

The Sky Bet League One Player of the Month award for October could not have had a more deserving home.

“Outside football, everything’s spot on and I would say that’s half the battle; if life outside football is settled, it helps everything go well on the pitch,” he continues.

“If you haven’t had a chance in the first half or something, you think something will drop for you in the second and it’s just a case of staying in that groove.

“I think it’s down to an accumulation of working with the same manager, the same staff and doing the right things off the pitch, whether that be in the gym or watching clips back or anything like that. The manager has always been on at me to get in the six-yard box and goalscoring positions more often and I’ve tried to do that more than ever this season and it seems to be paying off.

“I half wish I could have done it earlier on in my career but it seems to be working so hopefully it can continue.”

He is also showing that, despite the ‘target man’ label that is a natural accompaniment to a 6’3″ frame, he is anything but one dimensional. His goal away at Morecambe on August 17 was a prime example of that.

The frontman collected the ball on the left as Rotherham hit their hosts on the counter-attack, delicately rolled it past two players despite the mounting pressure on him and hit a stunning, curling shot over Jokull Andresson that, ultimately, won the game.

“I’ve been labelled all sorts in my career! I like to think my feet aren’t too bad – it’s like that old saying ‘good feet for a big man’! I try to work on all aspects of my game whether it’s hold-up play, winning headers, getting in the box or scoring goals – those are the main ones I try to work on in training.

“The Morecambe goal has got to be up there as one of the best this season! I got hammered afterwards, though – everyone said the wind took it! I enjoyed the backheel against Portsmouth as well – it’s always nice scoring against your old clubs.”

It goes without saying that Smith’s goals have helped to propel Rotherham into the promotion mix with more than three months of the season gone and, when they host Cambridge on Saturday, they will look to extend their impressive unbeaten run to 11 games.

The streak is particularly notable given how the Millers suffered such an agonising relegation on the final day of last season. In spite of a late fixture pile-up, they looked to have escaped drop against the odds yet their fate was confirmed after a 1-1 draw with Cardiff and Warne was reduced to tears as the reality dawned on him.

But he and his side have bounced back and have clearly used the heartache as fuel to do so, quickly restoring a winning mentality. 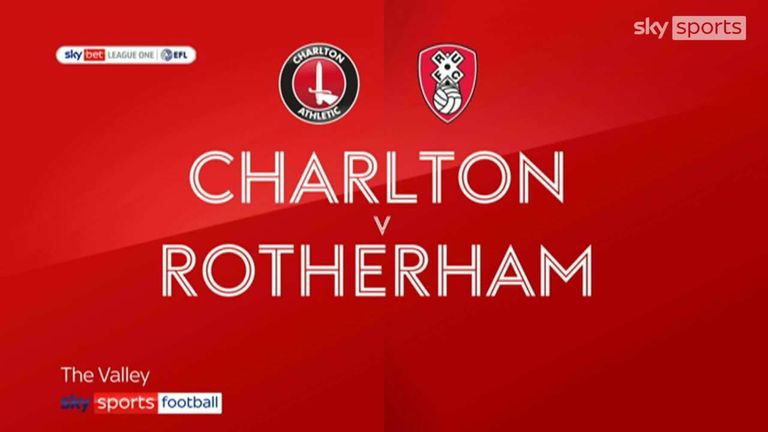 Highlights from the Sky Bet League One match between Charlton and Rotherham.

“We were very unfortunately go down on the on the last day; I think were five or so minutes away from staying up at Cardiff. I think a lot of people talk about the of hangover relegation, but the manager and the staff on nipped that in the bud early doors and we set our goals for this season, which is obviously promotion to get straight back up,” adds Smith.

“That was massive for everyone. We needed all the new players to know the mentality of the club and that we want to go back up to the Championship, so I think was the goal of the manager to get that out of the way early doors.

“We only ended up losing only one player – Crooksy [Matt Crooks] to Middlesbrough – so managed to the core of the squad together and the quality of the players the manager and the staff have managed to bring in has just added to what was already a Championship squad.

“We’ve said, and that the staff have always said, that losing games can become a habit as well as winning games. Fortunately we’re in a position where we’re winning games and that’s becoming a habit.

“The lads know their roles inside out at the club so they know what’s expected of them come Saturday or Tuesday. We’ve got a really good, tight-knit group, so everyone seems to be doing well.”

If Michael Smith can continue to score goals on such a regular basis, it might not be too long before Rotherham earn the chance to set the record straight in the Championship once more.