Aden Durde may go down as Britain’s greatest NFL export, if he hasn’t already locked down that reputation.

With every Jordan Mailata pancake and every Efe Obada sack and every International Player Pathway programme invitation comes a reminder of his gap-bridging legacy entrenched in the NFL’s globe-trotting mission. Without him, the bridge might still be in its planning stages.

Durde has been the quintessential teacher and innovator for overseas athletes on the outside wanting in, by nature inclined to work selflessly in the shadows with the unadulterated goal of helping others chase the dream.

Often he has stressed the belief there are other coaches this side of the Atlantic that could thrive in the NFL as he has and currently is. That may be true, but there is a reason it was he Jerome Henderson recommended and he that was subsequently hired as an intern by the Cowboys in 2014 as a product of the Bill Walsh Diversity Coaching Fellowship, a reason defensive coordinator Dan Quinn wanted him alongside him in Dallas upon leaving the Atlanta Falcons, where Durde had worked from 2018-2020.

Unfortunately for his non-egoistic ways, he has studied, honed, and performed his way to plain old humdrum coaching notoriety.

It’s funny. Rarely has anybody been less interested in the allure of the Hard Knocks cameras than the former London Warriors coach when the Cowboys were the focus of HBO’s all-access documentary during the summer. Adopted by the NFL, and yet still refreshingly British.

Becoming the NFL’s first full-time British coach is a landmark reference point and a feat he can forever be proud of, but recognition is soaring beyond mere flag-bearing pioneer status.

Dallas’ self-effacing defensive line coach has helped transform a feeble and leaky unit into a slick and smothering platoon considered among the most accomplished in the NFL.

“We had (Jason) Hatcher, we had (DeMarcus) Ware, we had (Jay) Ratliff, we had those guys back here,” said Cowboys owner Jerry Jones recently while talking on his weekly radio show on 105.3 The Fan.

“I thought that was arguably a combination of some of the best players we’ve had on the interior. Beyond that, I’d have to go back to the 90s when we had such a rotation on the defensive line, and we really had fresh guys out there all the time. This group has the potential to have that kind of talent, without exaggeration. But (also) have numbers.”

Durde’s defensive line is clobbering the big men staring them down, disguising and chopping and crashing their way to opposition backfields at a contender-calibre frequency. 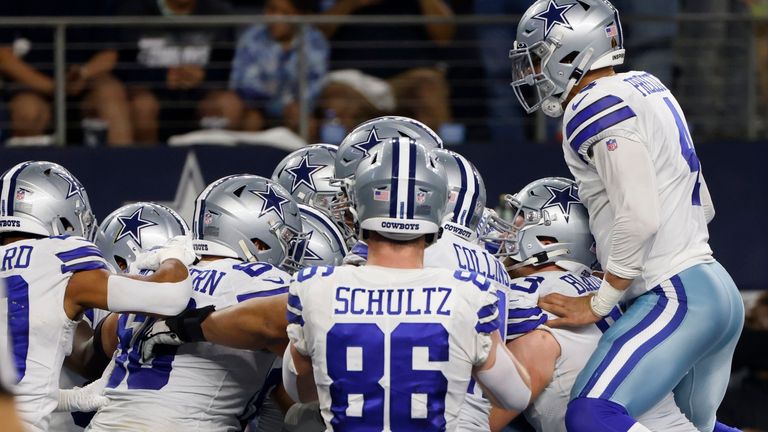 Highlights of the Cowboys’ 56-14 win over the Washington Football Team, during which they sacked quarterback Taylor Heinicke EIGHT times

Highlights of the Cowboys’ 56-14 win over the Washington Football Team, during which they sacked quarterback Taylor Heinicke EIGHT times

When star pass rushers DeMarcus Lawrence and Randy Gregory were missing through injury earlier in the season, he oversaw the unearthing of rookie off-ball linebacker Micah Parsons as an upper echelon edge threat. His line will shift the first-round pick between nine-tech, five-tech and three-tech lineman, he’ll usher him up to the line of scrimmage late pre-snap to alter the quarterback’s scheme identification, he’ll purposely instruct outside leverage from his defensive end to clear an avenue for an off-ball-aligned Parsons to attack the ‘B’ or ‘C’ gap.

He is playing a personal role in maximising a player with the arsenal and potential to be one of the organisation’s greatest draft investments of the modern era.

Durde accommodates the Hi Lo and pirate stunts that draw on the explosion and lateral quickness of Parsons, Lawrence and Gregory to interchange while relying on interior monsters to penetrate and collapse the pocket. According to PFF editor John Owning, the Cowboys allow an NFL-best -0.351 EPA per play when using stunts up front.

Sometimes they will ditch subterfuge and disguise altogether for mere nose-punching speed and power.

Since Lawrence’s return to action, he has taken the opportunity to occasionally shift him inside next to an edge-setting Parsons to create a frightening combination over the tackle and guard.

Among those interior monsters is Osa Odighizuwa, whose hit-the-ground-running production in his rookie year is one of Durde’s unsung achievements in combatting the modern bootlegging, RPO’ing and jet-sweeping offensive schemes designed to challenge the horizontal mobility and adjustment of defenses, particularly hulking tackles.

Injuries to Trysten Hill and Neville Gallimore have turned the spotlight on both Odighizuwa’s power but also his shifty hands and low center of gravity to read and react to play development during engagement from a bear front. Durde has meanwhile harnessed his ability to take linebacker-esque angles by lining him up on the edge at times to let him attack with an extra yard of momentum.

With second-year Gallimore’s motor and ferocity back in the fold upon his return from injury, Durde and Quinn’s defensive front looks as protection-sapping as any in the league.

They had success against Jalen Hurts and the Eagles’ tricky run game earlier this season and on Sunday gave up 127 rushing yards against the Cardinals, 44 of which came from Kyler Murray. They may not be as proficient or as consistent at shutting down the run as they are pressuring the passer, but they are striving to match the league’s ever-developing off-tackle trends. 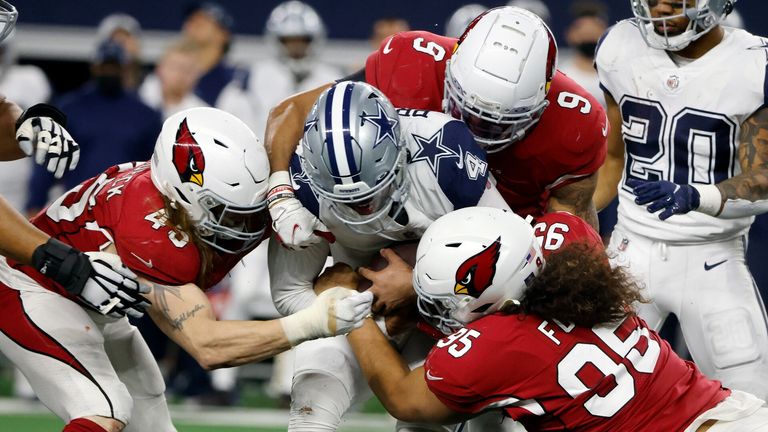 Highlights of the week 17 clash between the Dallas Cowboys and the Arizona Cardinals.

Highlights of the week 17 clash between the Dallas Cowboys and the Arizona Cardinals.

Durde is a native of the hybrid and pre/post-snap motion modern defensive era, while he and his Middlesex-born thick British accent offer acclaimed man-management reflective of his role in spotting and chiselling European talent.

He is now also a playoff-bound coach in the NFL.

As Quinn continues to be linked with head coaching vacancies across the league, there is a branching conversation over his potential successor in Dallas.

“He has been outstanding for them, should be a defensive coordinator next year,” said Good Morning Football’s Peter Schrager or Durde earlier this season.

Before Christmas Durde took the time to speak to UK reporters over zoom at what would have been roughly 6.30am in Dallas. By then he had already started work, continuing preparations for the Cowboys’ Thursday night Thanksgiving game.

His work ethic is faultless, while the speed at which he appears to learn would rival some of the best. If not now, the former NFL UK head of football development looks a defensive coordinator of the future. Beyond that, who knows?

Britain can still parade him as one of their own, but his roots are becoming secondary to his production in the eyes of plaudits. This is just a good football coach who happens to be from our neck of the woods.