Michael van Gerwen continued his quest for a fourth World Darts Championship and first since 2019 after easing to victory over fellow Dutchman Dirk van Duijvenbode on Friday night.

Van Gerwen coasted into the quarter-finals after a 4-1 victory over a below-par Dirk van Duijvenbode with a 100.4 average to set up a meeting against Dobey on New Year’s Day, who had earlier knocked out former champion Rob Cross.

“I feel good and that anything is possible in this World Championship. If I play like this, I am not going to lose,” Van Gerwen told Sky Sports’ Emma Paton in the studio.

“Something strange has to happen to me, an off day or whatever, for me not to win my games.” 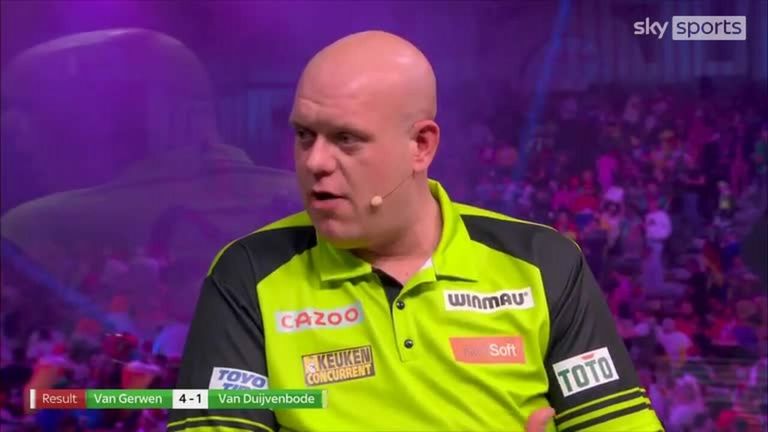 Michael van Gerwen said he beat Dirk van Duijvenbode with his ‘B-game’ and says if he continues to play like he is, ‘he won’t lose’

Michael van Gerwen said he beat Dirk van Duijvenbode with his ‘B-game’ and says if he continues to play like he is, ‘he won’t lose’ 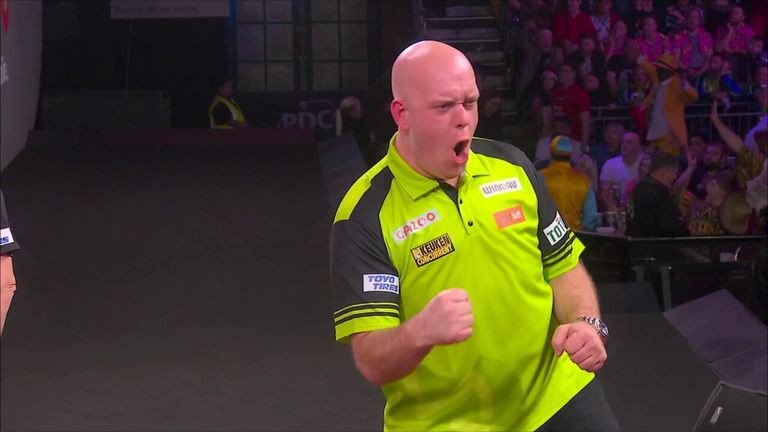 Van Gerwen produced another strong performance, averaging 100.42 and 43 per cent on the doubles.

He started much the better of the two in the all-Dutch clash and despite a cracking 117 from Van Duijvenbode in the second leg, five costly missed darts at doubles allowed ‘Mighty Mike’ to secure the opener.

‘Aubergenius’ then threw the fourth 170 of the tournament and second of the night to get back into the second set, but after missing his chance to force a deciding leg, Van Gerwen accepted the gift to double his lead with a 100.7 average. 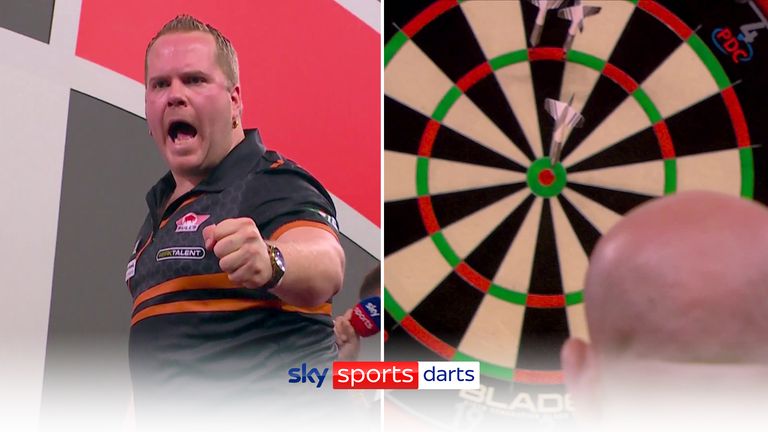 Van Duijvenbode netted ‘The Big Fish’ during his match against Van Gerwen. It was the second 170 of the night!

Van Duijvenbode netted ‘The Big Fish’ during his match against Van Gerwen. It was the second 170 of the night!

Van Duijvenbode closed the gap to one after winning the third 3-1 with an impressive 120.67 set average and despite forcing a fourth-set decider he endured a disastrous scoring leg to allow MVG to help himself to a two-set advantage once again.

The title favourite then breezed through the next to book a meeting with ‘Hollywood’ Dobey thanks to a show-stopping 120 finish. 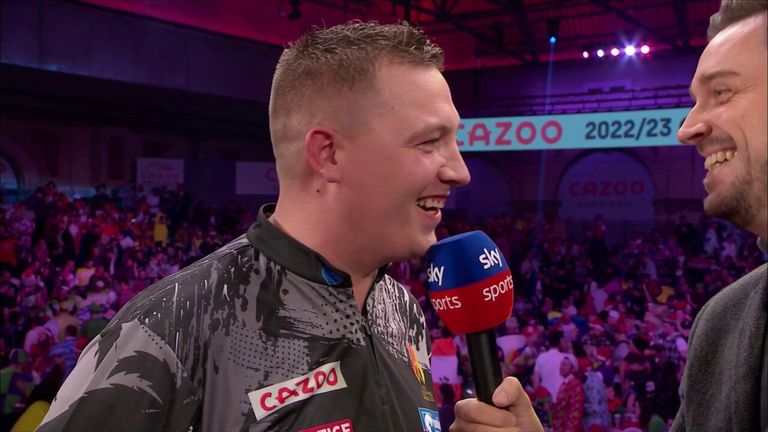 Dobey made it through to the quarter-finals at the Worlds for the very first time courtesy of a 4-2 victory over 2018 champion Rob Cross with a 102 average, eight 180s and a stunning 170 checkout.

Having clinched the opener, ‘Voltage’ averaged almost 119 in the next but he didn’t even win a leg. However, Cross composed himself to sweep through the next and reclaim the lead. 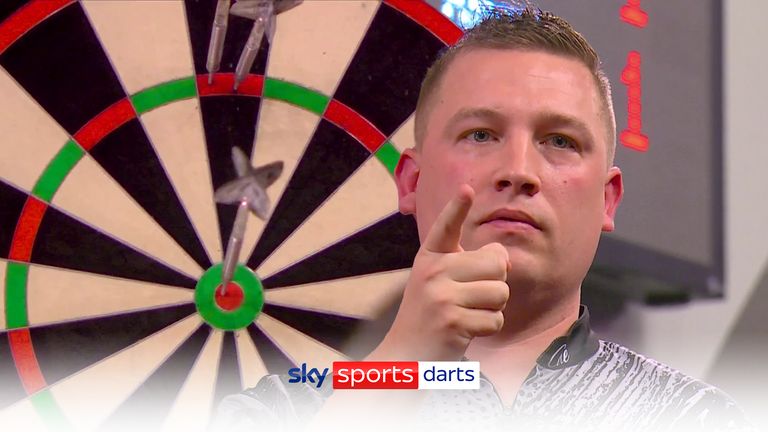 He edged closer to victory by winning the next 3-1 and he held his nerve in the sixth set on his sixth match dart to seal his spot in the final eight.

Dobey said: “It was 100 per cent [the biggest result of my career]. I finally got over that hurdle so I am delighted, buzzing. Rob threw everything at us. I hit 170s for fun at home so it was due, but 170s mean nothing. It is that winning double that means the most.

“There is no reason I can’t go all the way.”

Former Lakeside champion Stephen Bunting completed the quarter-final line-up by dominating Luke Humphries with a 99.43 average and landing 46 per cent of his doubles.

Bunting took an entertaining opening set 3-1 with the players sharing ton-plus finishes of 121 and 119, and he then pinned a brilliant 127 on his way to a 115.62 average to double his advantage before ‘Cool Hand’ Luke found some form to close the gap.

‘The Bullet’ converted double 3 to restore his two-set cushion and with the world No 5 reeling, Bunting crashed in a 106 to break throw in the opening leg of the fifth set before going on to make it through to a meeting with Michael Smith in a St Helens derby. 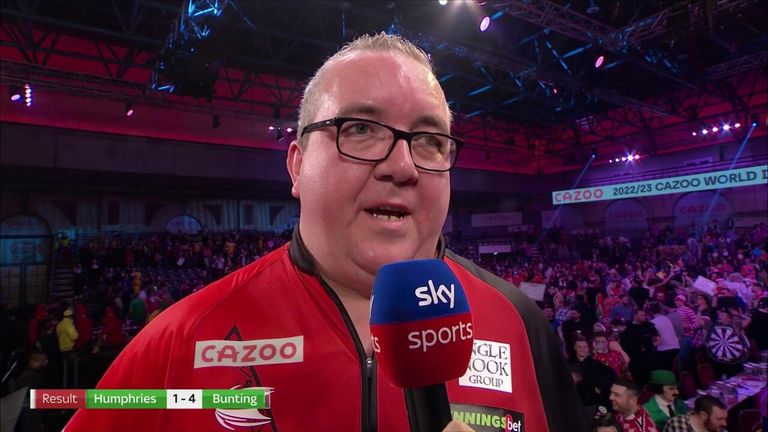 Wins for Smith & Dimi as Clemens makes history at The Palace

Smith fired in an imperious display to storm through to the last eight with a 4-1 win against Masters champion Joe Cullen. 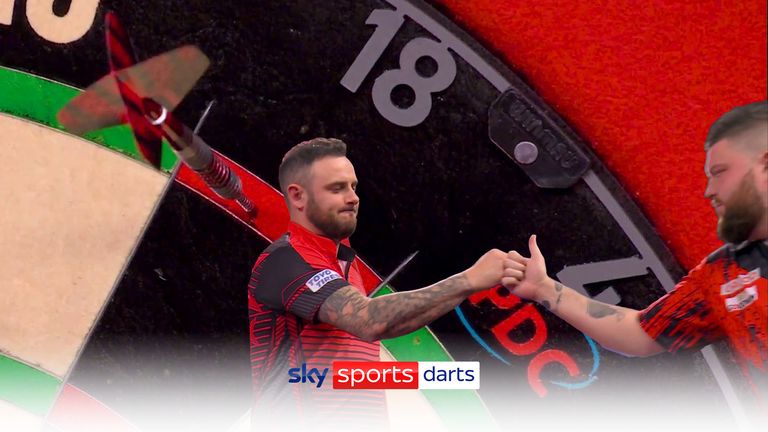 Watch Cullen nail this magnificent 153 checkout, which even Smith applauded

Watch Cullen nail this magnificent 153 checkout, which even Smith applauded

“I finally turned up and it felt good,” declared Smith, who averaged 103, landed ten 180s and converted 40 per cent of his attempts at double.

“I think the first set was important. Being 1-0 down against Joe could have been a big game-changer, and I knew I couldn’t afford to throw sets away. 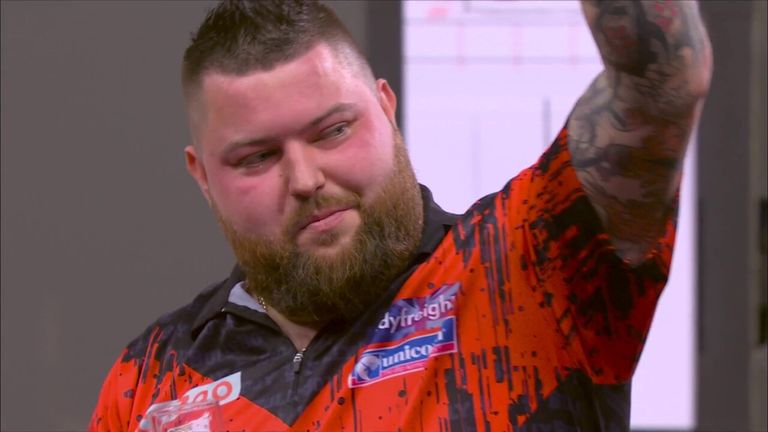 Elsewhere, Gabriel Clemens made history with a resounding 4-1 success against Dundee firefighter Alan Soutar, to become the first German player to reach the quarter-finals at the Worlds.

The ‘German Giant’ will next face a huge test against world No 1 Gerwyn Price on New Year’s Day. 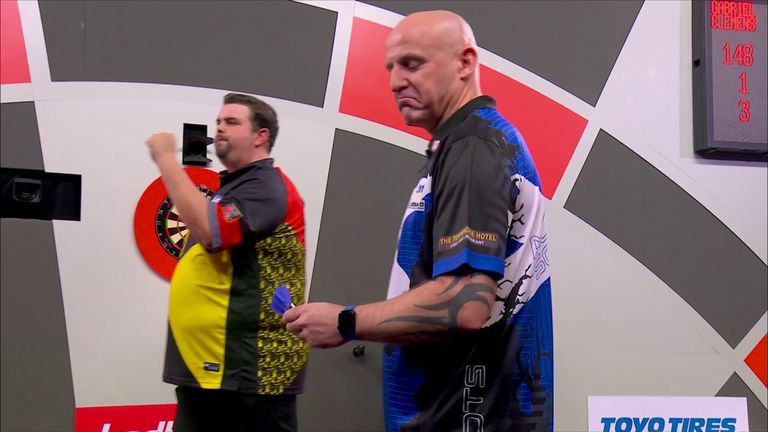 “He will be the favourite, but I’ve had three good games on the stage with him and I’ve beaten him before so it’s about taking your chance,” said the 39-year-old former locksmith.

“I hope I can put some pressure on him. It’s not easy to play against the world No 1. This is my first time playing in the quarter-finals of the Worlds so I hope I can give him a good game and maybe I can win, why not!?” 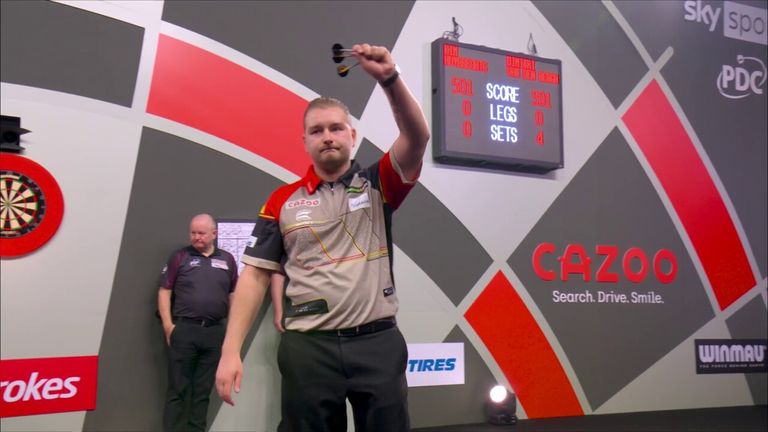 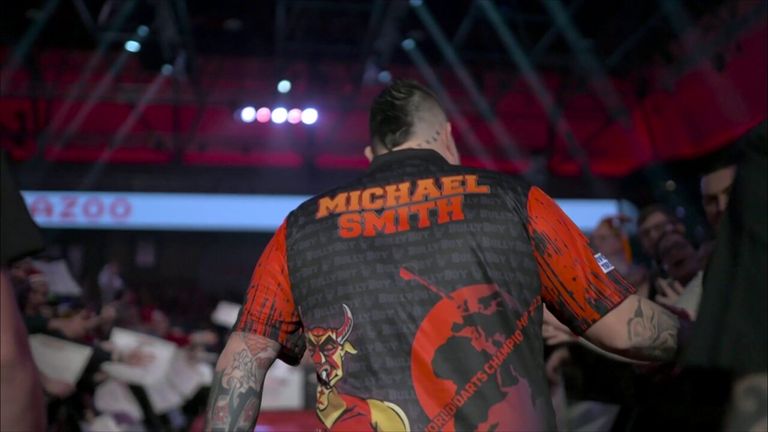 Wayne Mardle says Smith made his win over Cullen look ‘relatively easy’, with Mark Webster saying the St Helens thrower is capable of going all the way…

Wayne Mardle says Smith made his win over Cullen look ‘relatively easy’, with Mark Webster saying the St Helens thrower is capable of going all the way… 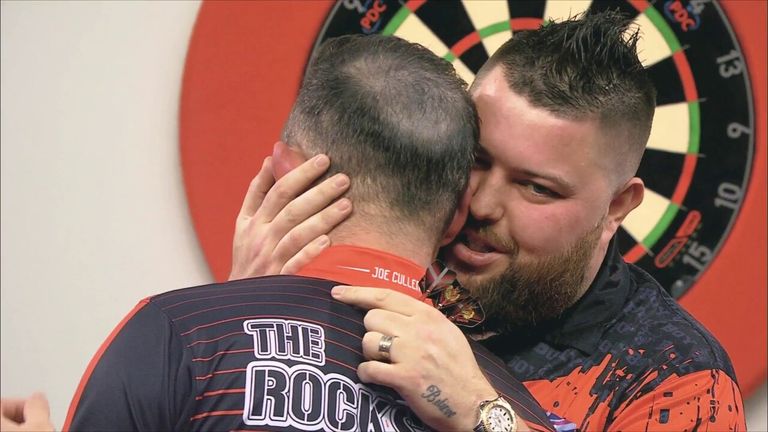 Welshman Gerwyn Price will take on German No 1 Gabriel Clemens on quarter-finals day at Alexandra Palace with all matches now the best of nine sets.

Firm favourite Michael van Gerwen then continues his quest for a fourth World title when he goes up against ‘Hollywood’ Chris Dobey.

The semi-finals and final take place on January 2-3.