Max Verstappen dominated qualifying to take pole for the Canadian GP after his Red Bull team-mate Sergio Perez crashed out in Q2; Fernando Alonso seals surprise second for Alpine; watch the Canadian GP live on Sunday at 7pm on Sky Sports F1, with build-up from 5:30pm

By Sam Johnston in Montreal 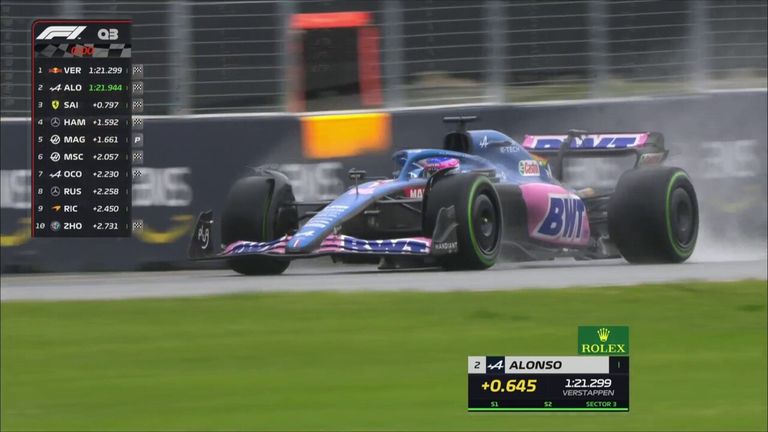 Two time world champion Fernando Alonso put his Alpine onto the front row for his second top three start in the hybrid era!

Two time world champion Fernando Alonso put his Alpine onto the front row for his second top three start in the hybrid era!

Max Verstappen took pole for the Canadian GP after his Red Bull team-mate Sergio Perez crashed out of a thrilling wet qualifying session in Montreal.

Fernando Alonso produced a stunning performance to snatch second for Alpine, while Carlos Sainz was third, with his Ferrari team-mate Charles Leclerc starting the race from the back row of the grid after taking a penalty for a new engine.

Lewis Hamilton secured his best qualifying performance of the season as he finished fourth, while his Mercedes team-mate George Russell was eighth after a gamble to try slick tyres on a drying track at the end of Q3 failed.

Haas excelled in the wet conditions as Kevin Magnussen came fifth, a place ahead of team-mate Mick Schumacher, who will hope to back up the best qualifying performance of his career with his first points in F1 on Sunday.

Daniel Ricciardo was ninth as his McLaren team-mate Lando Norris was knocked out in Q2 after being hampered by a technical issue, while Alfa Romeo’s Zhou Guanyu came 10th after making it through to Q3 for the first time in his debut F1 campaign. 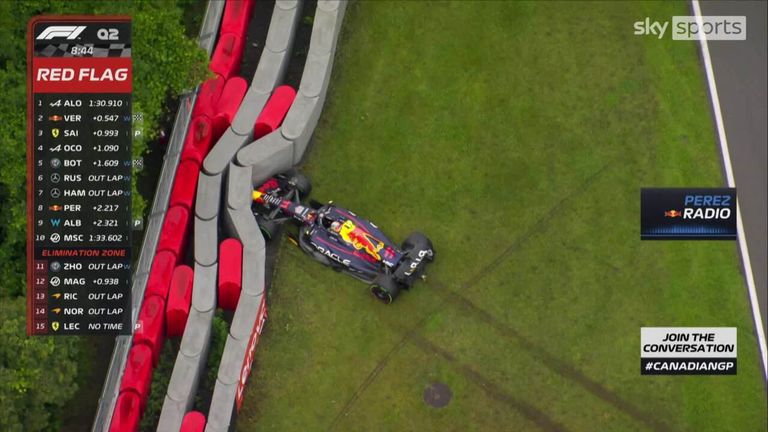 Sergio Perez ploughs his Red Bull into the wall at turn 3 to cause a red flag in the second session of qualifying at the Canadian GP.

Sergio Perez ploughs his Red Bull into the wall at turn 3 to cause a red flag in the second session of qualifying at the Canadian GP.

It’s just a second pole this season for Verstappen, who will be confident of extending his 21-point world championship lead in the dry conditions that are forecast for Sunday’s race.

The Dutchman has won four of the last five races, and his two nearest challengers, team-mate Perez and Ferrari’s Leclerc, will start 13th and 19th, respectively.

“I think today with the tricky conditions we stayed calm,” Verstappen said. “We didn’t make mistakes and we had the right calls in Q3.” 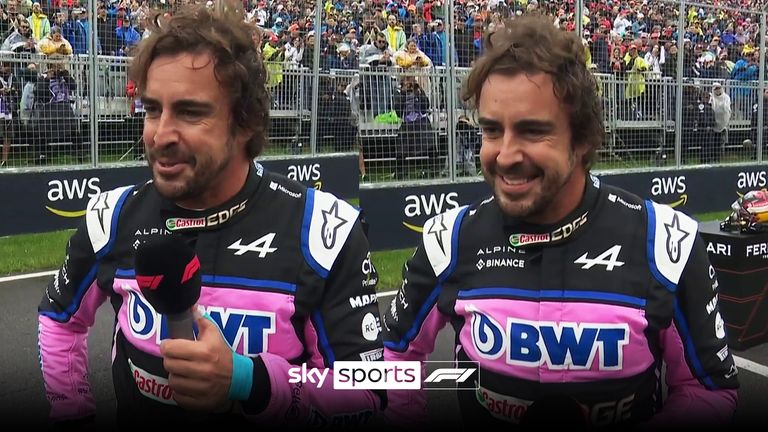 Fernando Alonso was in a buoyant mood after qualifying second at the Canadian GP, saying he was going to attack world champion Max Verstappen into the first corner on Sunday!

Fernando Alonso was in a buoyant mood after qualifying second at the Canadian GP, saying he was going to attack world champion Max Verstappen into the first corner on Sunday!

The Spaniard has excelled all weekend, finishing in the top five in both dry practice sessions on Friday, before topping the timesheet in Saturday’s wet third practice.

“It feels great,” Alonso said. “This has been an unbelievable weekend so far for us.”

While he is likely to have trouble holding off the race pace of his compatriot Sainz on Sunday, with Perez and Leclerc starting down the field, Alonso will be hopeful of adding the podium finish he secured at last season’s Qatar GP.

Perez ‘sorry’ for letting team down

With steady rain still falling as Q1 got under way at the Circuit Gilles Villeneuve, all 20 cars began on wet tyres and Verstappen immediately found his groove, going clear of Alonso and Sainz as lap times improved throughout the sessions.

It was only in the closing moments that it became clear who was genuinely at risk, and there were two surprise names that exited as Pierre Gasly and Sebastian Vettel were knocked out. 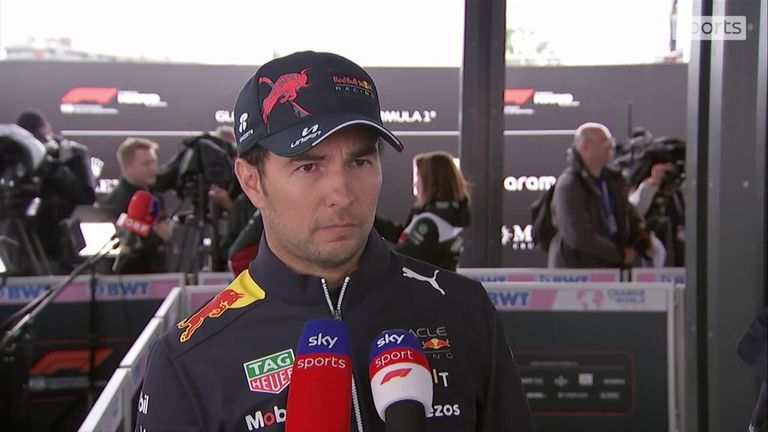 Perez was in a despondent mood following his early exit from qualifying after he put his Red Bull into the wall.

Perez was in a despondent mood following his early exit from qualifying after he put his Red Bull into the wall.

Both had excelled in the wet in P3, and Vettel sounded tormented as he questioned on team radio what had caused the drop off in speed between the two session.

Vettel’s Aston Martin team-mate Lance Stroll was unable to give the soaked home fans anything to cheer as he went out in 18th, a place ahead of fellow Canadian Nicholas Latifi. Yuki Tsunoda, who was condemned to starting from the back of the grid after an engine change penalty, did not attempt to make it through to Q2 and finished last.

There was doubt as to whether Leclerc would take the same approach, but with Perez struggling the Ferrari driver perhaps realised there was a chance to push one of his world championship rivals into an early exit. 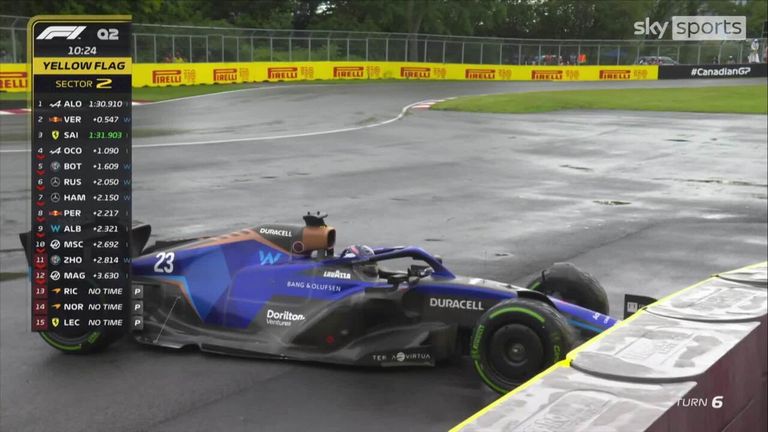 Alex Albon managed to keep his Williams going after running into the barrier at turn 6.

Alex Albon managed to keep his Williams going after running into the barrier at turn 6.

In the end he wasn’t required as Perez, having switched to intermediates in the drying conditions, took himself out in Q2 after locking up and going into the barrier at Turn 3.

Unlike Williams’ Alex Albon who had a similar incident at Turn 6 moments earlier, Perez became stuck in the barrier and a red flag came out that would delay the session and allow the track to dry out further.

“I did a mistake from my side so I’m very sorry for my team,” Perez said. “I let them down today unfortunately.”

Hamilton ‘so happy’ after sealing P4

A frantic finale to Q2 saw Hamilton and Sainz at risk, but both produced strong laps to advance.

There were mixed emotions at Alfa Romeo as Valtteri Bottas was edged out by Esteban Ocon in the dying seconds, but a thrilled Zhou celebrated over team radio as he made it through to Q3 for the first time. 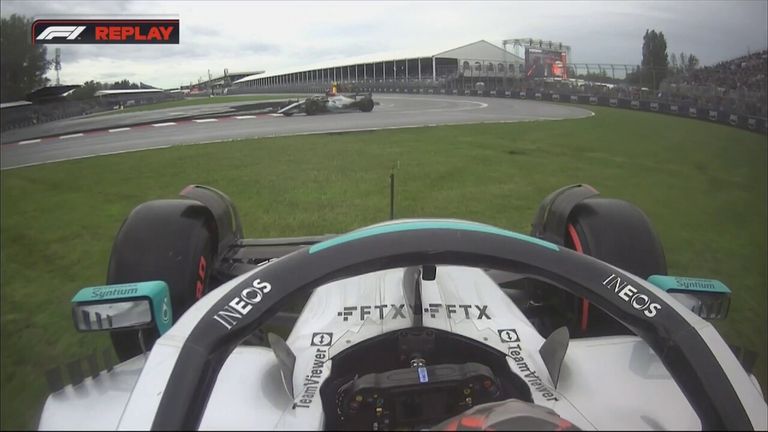 Mercedes and George Russell’s gamble to put him on slick tyres for a final run in Q3 didn’t pay off, with the Brit going off into the grass at turn two.

Mercedes and George Russell’s gamble to put him on slick tyres for a final run in Q3 didn’t pay off, with the Brit going off into the grass at turn two.

With the track drying further before Q3 began, the question of whether anyone would dare try slick tyres hung over the 12-minute session.

It was only Russell who gambled, and the decision was quickly proven futile as he damaged his rear wing after bumping the barrier at Turn 2.

The improving conditions meant track position was important, with the last over the line holding an advantage, but that didn’t apply to Verstappen, who was in a league of his own as he finished 0.6s clear. 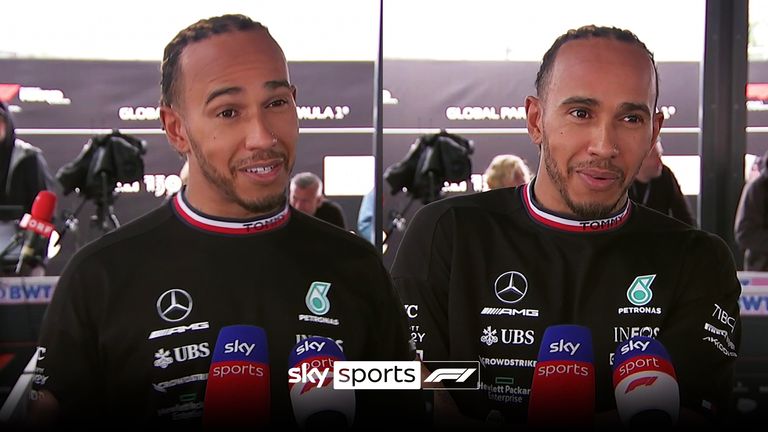 Lewis Hamilton was ‘so happy’ after qualifying fourth.

Lewis Hamilton was ‘so happy’ after qualifying fourth.

However, Alonso coming round the track after Sainz may have been crucial, as he edged the younger Spaniard by little more than a tenth to earn his spot on the front row.

Hamilton’s fourth place came after he had described the Mercedes as “undriveable” at the end of P2 on Friday, while the seven-time world champion ended a streak of three races in which Russell had outqualified him.