Hampshire’s James Vince smashed an unbeaten 129 from 62 balls, including 10 sixes, to help his side beat Somerset in the Vitality Blasts; there were also wins for Nottinghamshire, Essex, Yorkshire and Sussex 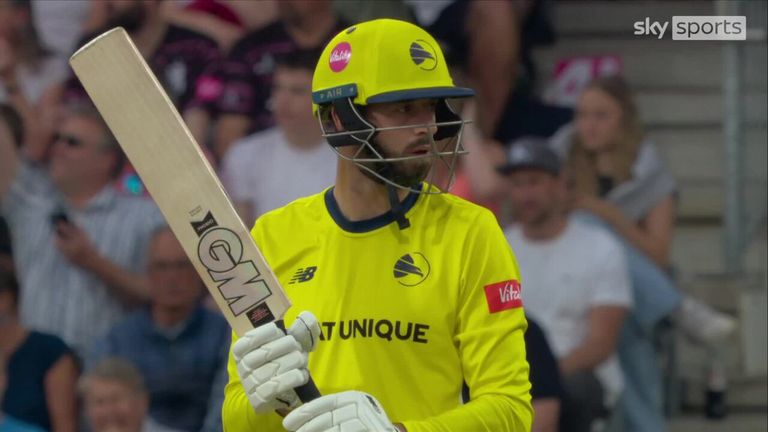 Hampshire’s James Vince put on a batting masterclass with an unbeaten 129 in their T20 Blast clash with Somerset.

Hampshire’s James Vince put on a batting masterclass with an unbeaten 129 in their T20 Blast clash with Somerset.

James Vince hammered the highest individual score by a Hampshire player in T20 cricket as the Hawks pulled off a 16-run Vitality Blast victory over Somerset at Taunton.

The visiting skipper smashed 129 not out off just 62 balls, with 10 sixes and nine fours, and was well supported by 19-year-old Tom Prest (62) as Hampshire recorded their biggest total in the competition, 208-5, after losing the toss.

After a brief stoppage for rain, Somerset replied with 194-9, Rilee Rossouw top-scoring with 55 off 28 balls and Tom Banton contributing 54 from 38 deliveries. Chris Wood claimed two for 26.

The result left Somerset still second in the South Group table, while Hampshire moved into the top five.

Vince’s amazing assault bettered the unbeaten 124 made for Hampshire by Michael Lumb in a T20 game against Essex at Southampton back in 2009. It included three sixes in a row in a 31-run over and hitting the last ball of his innings for a maximum.

Derbyshire’s five-match winning streak came to an end after Nottinghamshire bounced back from three consecutive defeats with a thumping 94-run victory over their neighbours.

The Outlaws posted 247-6 on their way to the win – their highest total in the format.

Ben Duckett hit a season’s-best 63 and Alex Hales his third half-century of the campaign as the Outlaws, who conceded a competition-record 261 against Birmingham last week, enjoyed their best night of what has been a disappointing season.

On a good batting surface, the Falcons had fancied themselves in a chase when they opted to field first, but they were never in the hunt, reaching 153-9 as fast bowler Zak Chappell marked his first appearance of the season by taking three for 28.

Veteran spinner Samit Patel took three for 32 and Steven Mullaney a miserly two for 17 after Brooke Guest top-scored for Derbyshire with an unbeaten 40.

Nonetheless, with two matches to come, the Falcons remain well placed to qualify for a second Finals Day appearance in four years.

Sam Cook’s stunning triple-wicket maiden helped keep Essex in the hunt for a quarter-final berth as they beat Middlesex by 21 runs at Lord’s.

Seamer Cook ripped the heart out of Middlesex’s top order with the wickets of Max Holden, Joe Cracknell and wicketkeeper John Simpson en route to figures of three for 23.

That left the hosts on 9-3, needing 162 for victory, and although captain Steve Eskinazi (43) and Jack Davies (41) mounted a recovery with a fourth-wicket stand worth 86, the hosts were limited to 140-8.

Earlier, Dan Lawrence (51) and Tom Westley (50) set a new Essex record for the fifth wicket against Middlesex with their stand of 84, eclipsing that of 63 by Paul Grayson and Andy Flower back in 2003, as the visitors reached 161-6 despite an impressive return of three for 16 from Chris Green.

Yorkshire kept the destiny of their qualification hopes in their own hands as they comfortably overcame bottom-placed Worcestershire by five wickets at New Road.

The Vikings moved to within one point of fourth-placed Northamptonshire, over whom they have a game in hand and will meet at Wantage Road on Friday evening.

England spinner Dom Bess destroyed the Rapids’ middle order on his way to career-best T20 figures of three for 15 from his four overs after the home side were put in to bat.

Worcestershire newcomer, Kashif Ali, and keeper Gareth Roderick added an unbroken 73 to enable the Rapids to set a 151 target on a green pitch.

But it was nowhere near enough and an unbeaten 46 from ex-Worcestershire player Tom Kohler-Cadmore saw his side home with 5.2 overs to spare.

Surrey lost for the first time in this season’s Vitality Blast as Sussex halted a run of five successive defeats in the South Group with a welcome 17-run win at Hove.

Opener Will Jacks looked to be leading Surrey to a target of 173 when he took his aggregate in this season’s competition to 396 runs with 76, his fifth 50 of the campaign and two days after his unbeaten 66 helped secure a last-ball win over Somerset.

But when he was caught behind trying to guide a quicker ball from left-arm spinner Delray Rawlins into the off side in the 15th over, having hit 11 fours and a six, Surrey’s lower order folded quickly and they were bowled out for 155 in 18.2 overs, their first defeat in any competition this season.

Skipper Chris Jordan, their last recognised batsman, was run out by Ravi Bopara’s throw from the covers after being sent back, and Surrey’s last five wickets fell for 16 runs, Bopara finishing things off with another direct hit to run out Dan Moriarty.

Sussex’s fourth win out of 11 was much needed, although they will have to win their three remaining games to have any chance of reaching the knockout stages.

Stand-in skipper Steven Croft made his second successive fifty at his home club but rain had the last word at Blackpool, where Lancashire’s Vitality Blast game against Durham was abandoned.

Croft might have been a shade relieved as Lancashire were moderately placed on 133-6 after 17.4 overs when the rain arrived at 6.30pm.

The result means that the Emirates Old Trafford team need only to beat Derbyshire on Friday to clinch their qualification for the knockout stages of the Blast.