Gerwyn Price and Jonny Clayton reaffirmed their title credentials with a dominant display against Philippines duo Lourence Ilagan and RJ Escaros on the opening night; there was also a victory for Gabriel Clemens and Martin Schindler in front of a home crowd 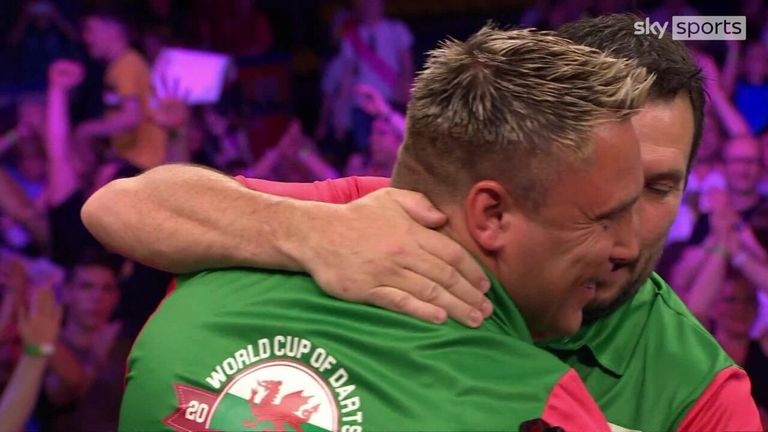 Former champions Wales and Netherlands impressed on the opening night of the Cazoo World Cup of Darts, as host nation Germany came through a deciding-leg thriller to sink Spain in Frankfurt on Thursday.

Gerwyn Price and Jonny Clayton claimed Wales’ maiden World Cup crown in 2020, and they reaffirmed their title credentials with a dominant display against Philippines duo Lourence Ilagan and RJ Escaros.

The second seeds produced the performance of the night at the Eissporthalle, averaging just over 99 to set up an intriguing last 16 showdown against 2021 finalists Austria.

Price and Clayton appeared poised to run riot following a blistering start, with Clayton following up a maximum from his fellow countryman by cleaning up 84 in two darts for an 11-dart opener.

Ilagan and Escaros fought back to level at two apiece for the Philippines, but finishes of 106 and 108 from Price, sandwiched between a 13-darter, saw them run out convincing 5-2 winners. 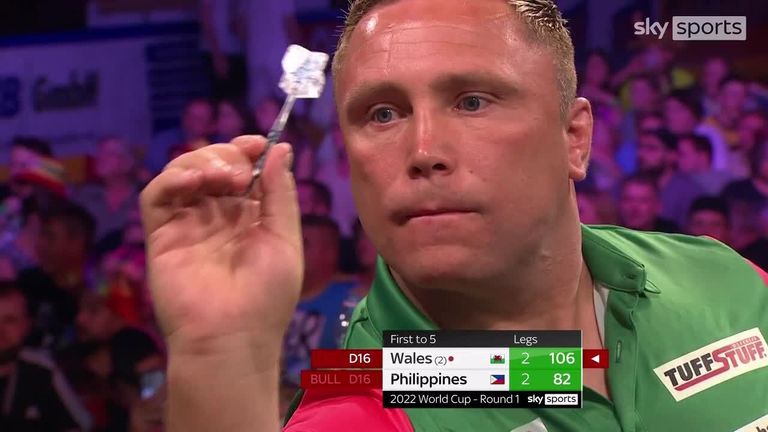 Enjoy some of the best checkouts from the night one in Frankfurt, watch day two live on Sky Sports on Friday

Enjoy some of the best checkouts from the night one in Frankfurt, watch day two live on Sky Sports on Friday

“I’ve been doubting myself recently, so today was a big confidence boost,” admitted Price, the 2021 world champion.

“We have a great bond,” Clayton added. “As long as we play our game, I think we’ve got a fantastic chance of getting our title back.” 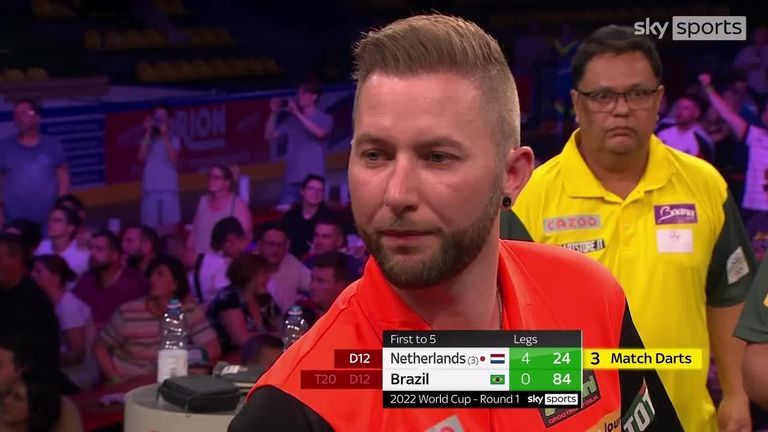 Netherlands‘ new-look pairing of Danny Noppert and Dirk van Duijvenbode breezed through to round two with a whitewash win over Brazil’s Diogo Portela and Artur Valle.

Van Duijvenbode, a replacement for Michael van Gerwen – who has undergone surgery on an arm injury – produced an accomplished display alongside UK Open champion Noppert, as the Dutch duo eye a fifth World Cup crown for their nation. 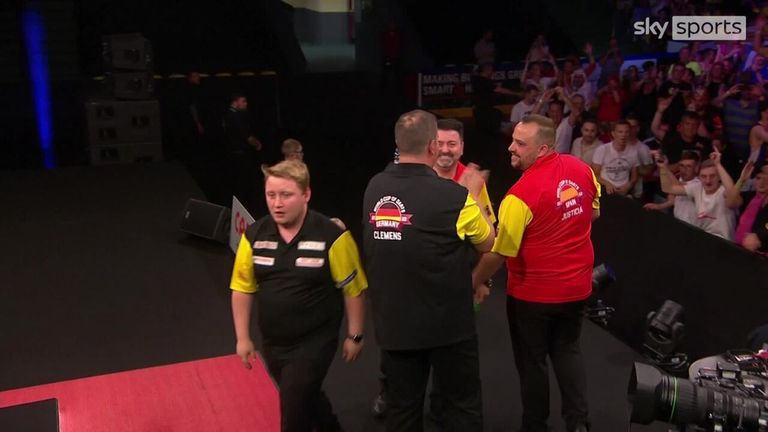 The fans in Frankfurt were thrilled after the German team, who had missed 10 match darts, eventually prevailed after a deciding leg against Spain

The fans in Frankfurt were thrilled after the German team, who had missed 10 match darts, eventually prevailed after a deciding leg against Spain

Germany’s Gabriel Clemens and Martin Schindler came through an epic first round encounter against Spain’s Jose Justicia and Tony Martinez to the delight of the home crowd.

The seventh seeds seized the initiative midway through the contest, with Clemens’ 146 finish in leg five swiftly followed by a classy 108 from Schindler in the sixth.

However, the pair then squandered ten match darts between them in an extraordinary conclusion, before Clemens regained his poise to pin double six in a breathless deciding leg which saw Spain left waiting on 24.

“It is a lot of pressure because you want to win for the fans, but I hope we have a full crowd on Saturday, and hopefully we can have another great game.” 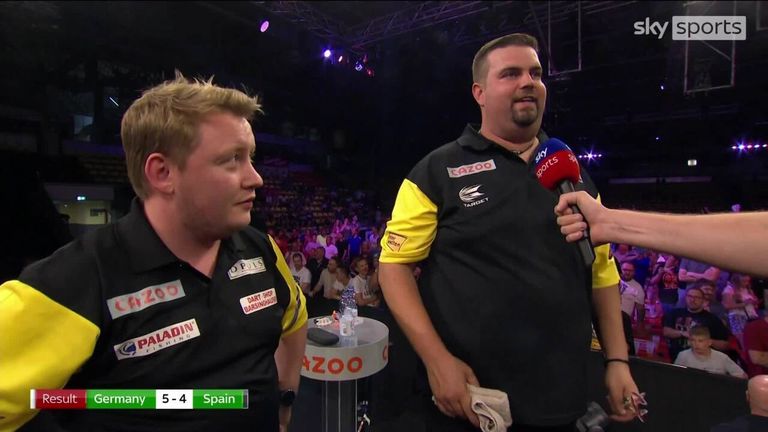 Daryl Gurney vowed to lead Northern Ireland to World Cup glory alongside Brendan Dolan, after they survived a scare to see off Gibraltar’s vibrant young pairing of Justin Hewitt and Craig Galliano.

“I’ve been telling everybody all week, we are going to win it,” insisted Gurney, a two-time TV title winner. 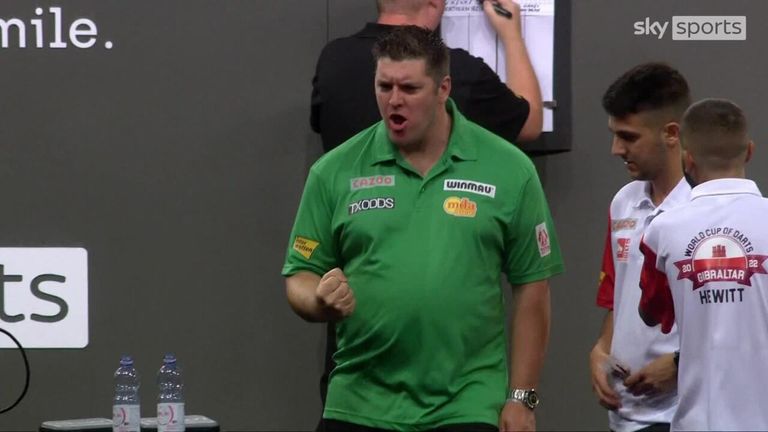 Elsewhere, 2019 finalists William O’Connor and Steve Lennon will play Noppert and Van Duijvenbode for a last eight spot, after the Republic of Ireland opened their campaign with a routine 5-2 win over Canada’s Jeff Smith and Matt Campbell.

New Zealand’s Ben Robb and Warren Parry made a winning start in their first appearance as a partnership, battling past Switzerland’s Stefan Bellmont and Thomas Junghans in a hard-fought tie.

In the tournament’s curtain-raiser, Danish duo Vladimir Andersen and Andreas Toft Jorgensen eased past Singapore’s Paul Lim and Harith Lim to book a meeting with hosts Germany in round two.

The first round concludes on Friday night in Frankfurt, as reigning champions Peter Wright and John Henderson open Scotland’s bid for a third World Cup title against Hong Kong.

Check out daily Darts news on skysports.com/darts, our app for mobile devices and our Twitter account @skysportsdarts. We’re back for the World Cup of Darts on Thursday, June 16 – live on Sky Sports Action from 6pm.