Some of the Premier League’s top players have opened up to Sky Sports News about what Black History Month means to them.

Black History Month was first recognised by the United States government in 1976. UK Black History Month runs throughout October and is an annual celebration of excellence across the Black community, highlighting the contribution of inspirational figures who have helped shape our culture.

England full-back Kyle Walker says Black history is something that needs to be celebrated on a daily basis – and not just for a single month during the year.

“Black History Month, it’s important, but do I think that it should be just one month of the year? No, I don’t,” the three-time Premier League title winner tells Sky Sports News.

“I think it should be every single day of every single month. But that’s not just for Black History Month or White history or Asian history. We should all just celebrate, you know, just living and enjoying life.”

Manchester United midfielder Paul Pogba sees Black History Month as a time for people from all backgrounds to celebrate, come together and enjoy themselves.

He says: “I think there shouldn’t be a Black History Month, I think it every month should be a humanity month for everyone. That would be nice for everyone. You could invite everyone, your friends from different countries and we all eat together. That could be a nice idea.”

As the fight against racial injustice in football and wider society continues, England and Leeds United midfielder Kalvin Phillips points to the importance of learning during Black History Month about those who have paved the way for others to thrive.

“I think it is important because you get to look back on different stories, you get to remember people who have done different things,” he says.

“It’s a major thing for me, because I’ve been through some things in my life – I’m going through a thing in the world right now where there are not some very good things happening.

“And it has been important for me to remember where you come from and know who it is that has helped us to get to where we are at now.”

For Everton striker Dominic Calvert-Lewin, Black History Month is about learning about role models and becoming a better one in his own right.

The England international hopes his success on the pitch can offer Black children hope and belief that they can achieve and accomplish anything they want in life.

He says: “For me as a kid, having role models of colour, and then becoming probably, you know, a role model myself today – which is still strange for me – I think it (Black History Month) is massively important. 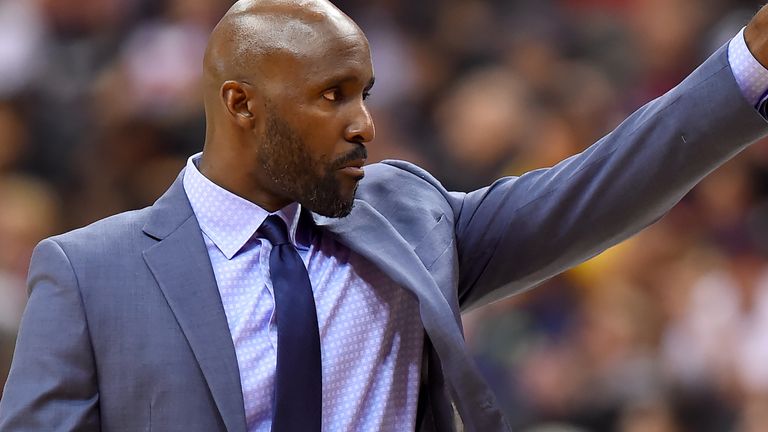 Education about the history of the black experience must be more truthful and not restricted to just one month in a year, Atlanta Hawks head coach Lloyd Pierce told Sky Sports News last year

“It’s important because when you see someone that looks like you, that perhaps might come from somewhere that you’ve come from achieving great things – then there’s no question of, well, I can’t do that because I’m Black, you know, because he’s already done it.

“I suppose that’s what I was brought up on [in terms of thinking]. Regardless, of skin colour. it was, you know, if he can do it, then you can do it. In terms of role models, it is massively important.”

Manchester City right-back Walker also tries to embrace his status as a role model in the game, and says he is driven by his desire to prove silence his critics.

“It’s always good to inspire, and me being where I’m from and what I have had to do deal with, on and off-field, I think that’s only made me stronger,” he explains.

“I think if you set your heart out to go and get something and go and achieve something, like nothing is impossible. I can assure you that there are people who wrote me off so many times – it gives me the drive to bounce back and make sure that I go and prove them wrong.”

When it comes to role models, there are few better than trailblazing 73-cap former Nigeria midfielder Jay-Jay Okocha, who is Everton forward Alex Iwobi’s uncle.

Asked who his Black sporting icon is, Iwobi told Sky Sports News: “My uncle, Jay-Jay Okocha. Even to this day, he is messaging me. He’s playing a huge part [in my continued development].

“For me, it would be my uncle. He told me about the times when he played in Germany [during spells at Eintracht Frankfurt and Borussia Neunkirchen in the Nineties]. I would say my uncle, Jay-Jay Okocha.”

Keep across all our features, news stories and video content on Sky Sports News and Sky Sports platforms.

The chancellor has announced a series of spending pledges ahead of the autumn budget this week, which include £5bn for health research and innovation and…

The removal of dangerous cladding from high-risk buildings is unlikely to be complete until seven-and-a-half years after the Grenfell Tower tragedy, government data suggests. The…

A former British spy who wrote a dossier on Donald Trump said he once spent hours with then home secretary Theresa May, briefing her on…

Russia’s leaders believe they are “at war” with the UK and its allies but Britain is failing to deter the threat, a former spy who…

Qodana code quality monitoring platform integrates with the IntelliJ IDE and supports Java and Kotlin, with support for additional JVM and non-JVM languages in the…