The annual transatlantic tenpin tussle between Team USA and Europe; the two teams will compete for a total pot of $75,000 with members of the winning team each taking home $10,000 and the runners-up receiving $5,000 per player

Team USA will be looking to make it four in a row against Europe in the 2021 Weber Cup this October 14-16 at the Morningside Arena, Leicester – live on Sky Sports.

Dominic Barrett has been named Team Europe’s captain as they seek revenge to reclaim tenpin bowling’s most prestigious team crown for the first time since 2017.

This year, each team will be made up of the top two players on the PBA Tour Rankings for each team plus two captain’s wildcards each.

Team USA captain Chris Barnes is relishing the prospect of making it four in a row.

He said: “It feels fantastic to be returning as captain of such a talented group. Team bowling has always been one of the greatest and most satisfying parts of my career and I’m honoured to return as captain of this prestigious event.

“The Weber Cup has become a run of streaks and we still have some catching up to do after they won five in a row. We will have a little bit of new blood this year which will rekindle the fire. I want our group to get out to a quick start, use then use our power advantage as the matches and players settle in.” 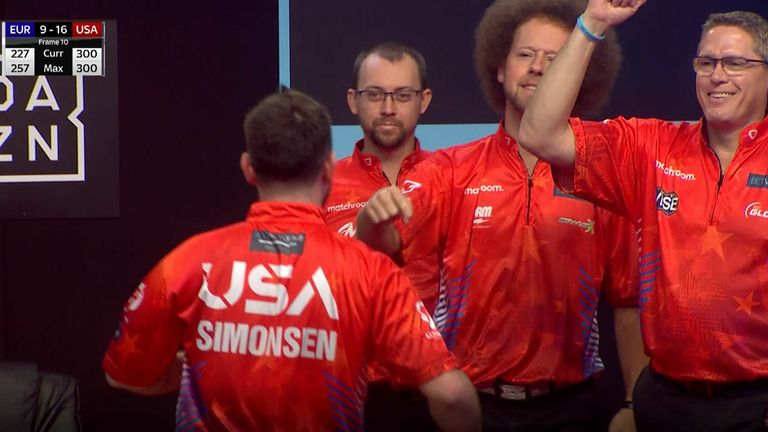 Team USA’s Anthony Simonsen bowled a perfect 300 game, only the eighth in Weber Cup history and the first individual one since 2013

Team USA’s Anthony Simonsen bowled a perfect 300 game, only the eighth in Weber Cup history and the first individual one since 2013

Europe won nine matches on the final day last year, but it wasn’t enough after losing the opening day 10-3.

Stuart Williams, who will represent Team Europe for the 11th time, said: “The fans being back is huge for us. Last year was a strange experience. If you get off to a bad start as we did, the crowd is huge in trying to get you back on track. Also on the last day, when we were making the comeback, I’m sure the crowd would have made it a lot more uncomfortable for the American team. I’m really excited to see fans back in the stands, I thrive on the energy that they bring to our team”

“Both sides have now gained a decent amount of experience. I’m not sure it is the advantage it has been in the past. But obviously, Dom and I have seen pretty much everything on the Weber Cup lane and we will draw on that to help Richie (Teece) being the rookie this year.” Williams added.

Established in 2000, the Weber Cup is the annual USA vs Europe tenpin bowling challenge. Named after American bowling legend Dick Weber, the man who helped shape modern bowling, the event features two five-man teams competing over three days in a series of singles and doubles matches.