Issy Wong takes two wickets late on day three as England eye win over South Africa; hosts declare on 417-8 in morning with Nat Sciver unbeaten on 169; rain wipes out much of Wednesday’s action; watch day four from 10.30am, Thursday, Sky Sports Cricket, first ball at 11am Issy Wong picked up two wickets during a superb late-evening spell on a rain-hit third day to boost England’s chances of victory over South Africa in the LV= Insurance Women’s Test at Taunton.

The fast bowler, making her Test debut, ruffled the Proteas with her pace, dismissing Lara Goodall (26) and Laura Wolvaardt (16) as the tourists closed the penultimate day on 55-3, trailing England by 78.

Just eight overs were possible between lunch and 6.30pm due to two lengthy rain delays but Wong came to life in the 13-over final hour, having Goodall caught down the leg-side and forcing Wolvaardt to slice to gully. 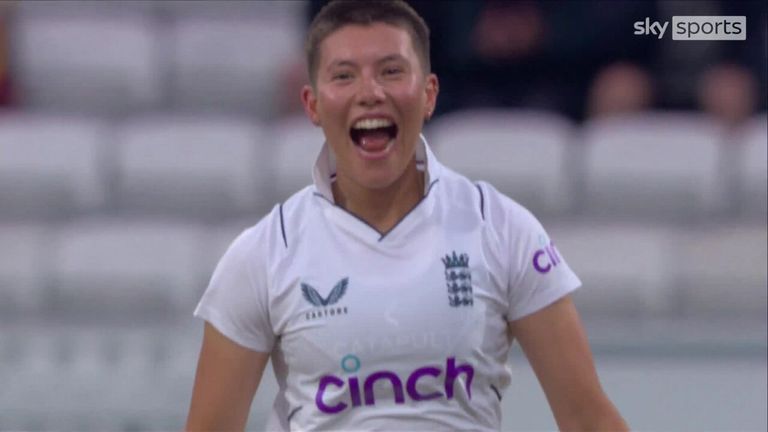 With the forecast for the fourth and final day also looking iffy it could still be tough for England to force a win but Wong’s twin strikes have given them a real chance of a first home Test success in 17 years.

England had earlier declared on 417-8 with a lead of 133 – Nat Sciver advancing from her overnight 119 to an unbeaten 169 before Heather Knight called her side in 30 minutes before the scheduled lunch break.

Sciver’s 207-run stand with fellow centurion Alice Davidson Richards (107) had revived England from 121-5 to 328-6 on day two and she added 86 with Sophie Ecclestone (35) for the seventh wicket on Wednesday morning.

Sciver was then the catcher at gully as Kate Cross removed South Africa opener Andrie Steyn (3), only for rain to bring about a slightly early lunch and keep the players off the park for just over two hours.

Play resumed at 3.05pm but the players were off again half an hour later – although not before England had missed out on the wicket of Goodall after failing to even as much as appeal a nick behind off seamer Lauren Bell. After numerous pitch inspections as the umpires quite rightly prioritised player safety, England and South Africa returned to the field three hours later, with Wong lighting up the mini-session under leaden skies.

England began day three hoping to quickly swell their overnight lead of 44 and Sciver and Ecclestone duly obliged – 89 runs coming from the 121 balls the home side faced in the morning.

Sciver progressed to the fourth-highest score by an England women’s player in Tests, driving, pulling and sweeping her way to 21 boundaries for the innings, while Ecclestone – at the crease after Davidson-Richards departed to the last ball on day two – hit four fours in her aggressive knock. 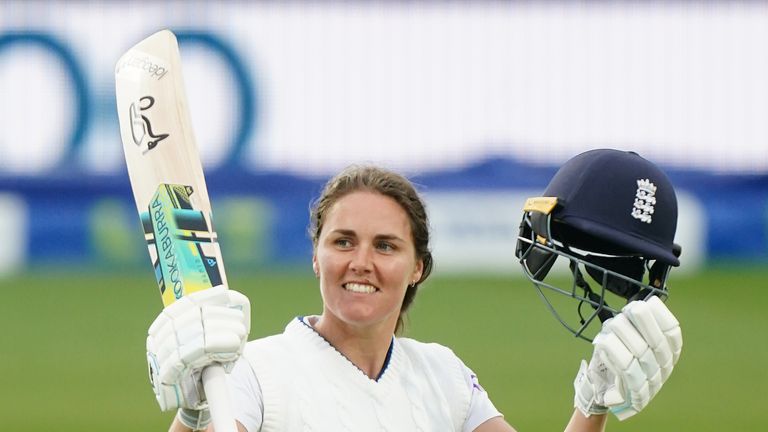 Nat Sciver is the eighth England player to score 150 in a Women’s Test, reaching the landmark from 249 balls

Nat Sciver is the eighth England player to score 150 in a Women’s Test, reaching the landmark from 249 balls

Ecclestone was dropped on 18 with seamer Anneke Bosch unable to grab a sharp return chance to her right and missing out on a fourth wicket of the innings – Bosch ending with 3-77 from her 18 overs.

Ecclestone was finally pinned lbw playing back to left-arm spinner Nonkululeko Mlaba and her dismissal was followed by Cross (1) being run out four balls later after failing to ground her bat at the non-striker’s end.

Knight declared at that point, ending Sciver’s chances of achieving the best score by an England player in a women’s Test, which remains the 189 Betty Snowball struck against New Zealand in Christchurch in 1935.

Watch day four of the LV= Insurance Test between England and South Africa live on Sky Sports on Thursday. Coverage begins at 10.30am on Sky Sports Cricket and Sky Sports Mix, with the first ball at 11am. 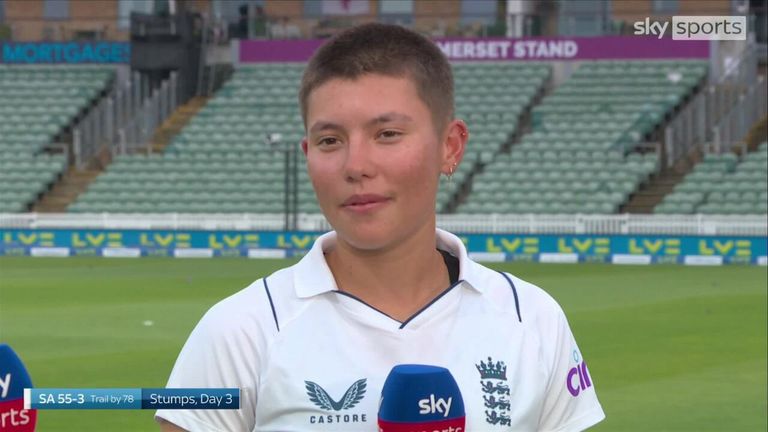